*this is part two of our series Q&A with Stacey Harmon. You can read part one here.*

Now is the time we talk with agents about business planning for 2013. How do we attack that with Evernote and why is it better than anything else out there?
There are three things. Access, flexibility and search.

#1 You can access Evernote from anywhere. It doesn’t matter what device, iPhone, Blackberry (god forbid) there are Trunk partners developing interaction even if you’re not on a smart phone there’s SMS action available.

#2 It was Krisstina Wise that said this to me. One of the powerful things about Evernote is that it’s like Apple. It’s this open platform that can be utilized however people want. And that’s overwhelming for most people. One of the reasons is that there’s no structure to it. You have to bring the structure to it. GTD brought that for me, but for others that’s overwhelming sometimes, but because it’s so open it has flexibilty to work in any situation. You just have to have a system to deploy.

That’s why it works for so many people. It’s not a structured CRM where you have to have fields and things like that. It can be tracking whatever it is that you want. Dean Ouellette’s book Evernote for Real Estate does a great job of laying out the basics for a real estate agent. Krisstina Wise’s training does an outstanding job showing how Evernote is their hub and what the auxiliary applications are that interact with that. Those two are far more the day to day detailed on a transaction. For me, it’s not that it’s business, I can manage my taxes even things like my health, down to my blood pressure. You can tailor it to however you want. It’s life changing.

#3: The ability to search. As powerful as Gmail is, I’ve changed my work habits based on Gmail Search and Evernote Search (Evernote 5 for Mac now also has saved searches, read my Evernote update for Mac post here). I don’t even use tags. I don’t use tags at all because the search is so strong.

What’s your plan and strategizing for 2013. How will Evernote be a part of that?
For me, Evernote is my ability to remember everything. So anytime I get an idea, I’m logging in a note. I keep project lists, I keep goal and task lists. I’m able to break down my thoughts and things that I need to follow up with. So I just trust that it’s my go-to system to plan and layout my hard facts as well as my desires and my goals. It’s a cloud based community. Your 2013 goal needs to be to get digital – get cloud based.  It’s very important for agents to be out in the field interacting with their people and Evernote allows them to do this.

Let’s talk sushi.
We have to address those people that were like me three years ago and downloaded Evernote and are like “ok” or “wow, there is something here”. For me Evernote is like sushi. I am not a big sushi fan, but if people like sushi, they love sushi. It’s black or white. You either like it or you hate it. And if you like it, you don’t just like it, you LOVE sushi. I’m always perplexed by this. What am I missing? How do we get there? I’m starting to identify that there’s four speed bumps that stop people from embracing Evernote.

#2 It’s too complex. It’s a blank slate and needs structure.

#3 I’m going to run out of space. I can’t put everything in there because I’m going to max out my account and it’s going to cost me a ton. Once I got over that fear I exploded my usage. I have over 2,000 notes I put everything I can possibly put in there and I have yet to reach my data usage. At some point, you will upgrade but it’s $5 a month to get theextra storage. You can always upgrade, it’s just $5 a month. They’re not there to gouge you for it. You’ll gladly pay.

#4 I’m not going to be able to find what I’m looking for. With Evernote 5, they now have predictive search. It will suggest to you things that you’ve typed. It’s amazing!

We know Evernote works on all platforms, which do you use?
From an agent’s perspective if they have points they want to negotiate in an offer, they could be dictating that. Evernote does work on all platforms, I have some advantages to my Evernote usage and efficiency because I use an iPhone 5. I’m using Chrome and I’m using a Mac. Clearly can read to you but you have to be a premium user and it only works in Chrome. I could have the Inman NEXT blog post read to me if I’m in Chrome while I’m waiting on the phone, because you know, agents are never waiting on the phone for anything, right?

Can you explain what Trunk is? What are some of your favorite Trunk products?
The Trunk is basically all of the inspirations that make Evernote more powerful. So, you know it’s all the partners and products that integrate with Evernote to extend the functionality. The Evernote trunk is absolutely amazing. They actually have 15,000 developers working on the platform and they expect that to sky rocket. And I rely on many trunk partners. 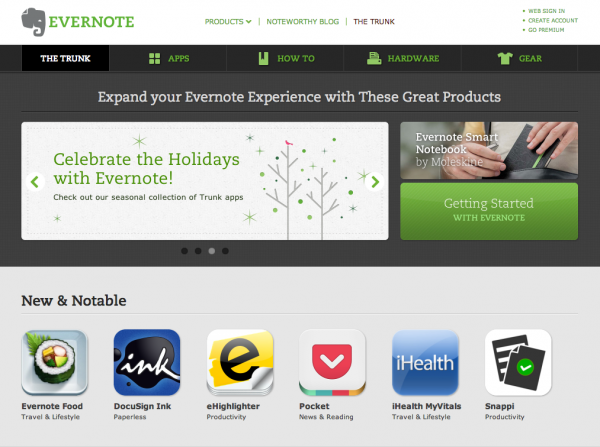 Evernote Webclipper and Clearly are amazing. There are some other ones that are essential also. My favorite is File This Fetch. What they do, is I log in and I tell it where all of my bills and bank accounts are located and either once a week or once a day, they go and sweep and they suck in a PDF of your bill to your Evernote account. So I have a PDF hierarchy of all of my bills and invoices centralized in Evernote.

One of the things that I think is, this isn’t necessarily just about being a real estate agent. This is about being someone that has to do taxes which all real estate agents do and pay bills. So, one of the things that Evernote enabled me to do is to be a really flexible micropreneur, which is kind of what agents are anyway.
I have to manage a business and that includes receipts, taxes and billing. I use Evernote and Trunk to do this entirely digitally and I think that agents can really simplify their lives using that.

Besides Evernote, what other tools do you use?
My core system is Google apps, Evernote, Dropbox, Google Voice, Chrome which I know is a problem for agents and the MLS. Use IE for MLS and Chrome for everything else. A Verizon MYFI or some kind of internet. You have to take internet out of the equation. I cannot rely on public Wi-Fi. Agents shouldnt either. It’s worth the $50 a month to have access. It’s too important to your business when you’re with a client. Ive got the MacBook Air, iPhone and iPad. Being Mac helps me to stay with all of these things that may not be possible. Evernote solves that problem.

That’s it! I’m cloud based with those things. That’s my foundation. I use Facebook because I’m a Facebook marketer and we could talk social but that’s a great discussion about a marketing strategy. This is my productivity system. It doesn’t drastically change.

Here are Stacey’s tips for getting your information into Evernote:

**Stay tuned! In a couple of months we’ll be having a video session with Stacey and a few others to talk about the new Evernote for Business**