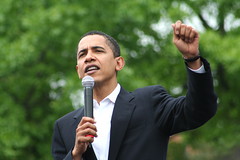 Two years ago, when Zillow launched, it was a thrill to pull up your neighbors’ (or boss’) house on the site and see how much their house was worth.

It’s still insightful, it just might not be so much fun anymore (see NAR lowers 2008 price forecast).

And while there are still complaints over the accuracy of Zillow’s estimates — the company itself refers to them only as “starting points” — the Zestimates are still arguably the most compelling feature on the site.

In the same way that Zillow brought transparency to home values, Fundrace is bringing it to campaign donations in this election year. The site (which first launched in 2004) has now been swallowed up by mega-news site The Huffington Post.

On Fundrace, you can search by city or zip code and see the results mapped onto a Google Map. You can see to whom and how much your neighbors have been contributing to political campaigns.

Frankly, it’s a little creepy, but I guess it’s all public information.

You can also search by company to see how their employees break out. So, of course, my curiosity got the better of me and I had to start looking at the real estate category…

What else did I find? It seems are real estate agents are overwhelmingly pro-Democrat.

And the big brands?

It gets more interesting the deeper you dig – but I think I’m just going to stop right now.