I was checking Notifications on Google+ the other day, and a post from Google+ VP of Product Brad Horowitz (forwarded to my attention by my friend Missy Caulk) fell into my lap.

“I’m traveling to the Midwest this weekend… first to stop by Lollapalooza, where there will be a Google+ stage! Then I’ll be traveling back to Michigan to visit with family.
While in Michigan, I’ll be doing a Plus-up (a Google+ meetup?) to talk about Google+ to anyone in the area and curious to learn more and/or offer feedback

That Google+’s VP of Product Development would be coming to the town where I live and work? 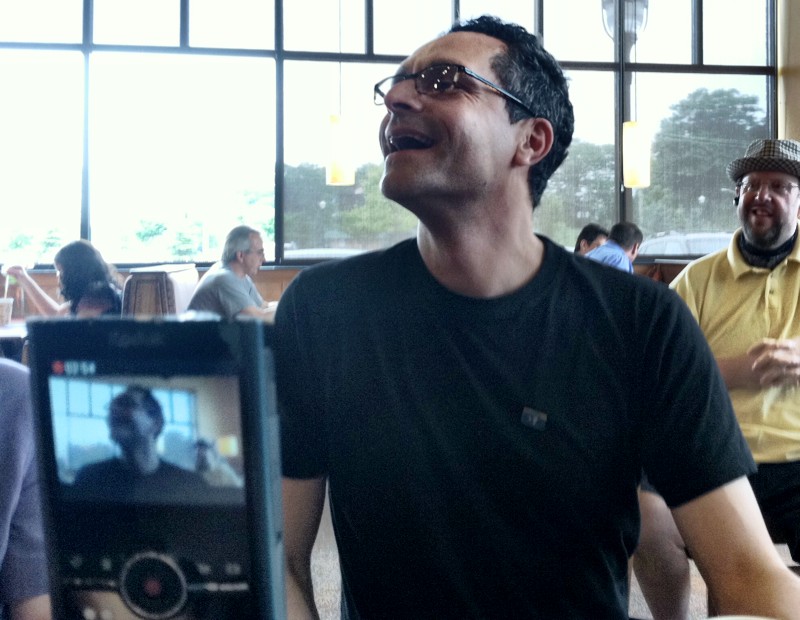 That he would be engaging Google+ users in an open forum in an establishment 1.4 miles (according to Google Maps…ha ha) from my office?

To say that I was surprised would be an understatement.

In any event, I seized the opportunity and showed up at the appointed time. I got lucky and ended up sitting directly across the table from Brad.

I asked him if I could shoot video, and he graciously agreed. I sat up my tripod and my camera, and let it roll.

For the next 75 minutes, Brad answered a plethora of questions from some of the more socially savvy in Metro Detroit.

I whittled that 75 minutes down to a little over 14, focusing on what I felt were the “tough questions” and the things a typical Google+ early adopter would want to hear.

To facilitate your consumption of the video, please note that I annotated the face of the video with the question that Brad is responding to at that particular point on the footage. I did this so that you can scroll around inside the video and quickly find the responses to the questions of most interest to you. Here is that video:

The biggest takeaways for me personally:

•    Google+ was not expecting to grow this fast…
•    There are a lot of features, bells and whistles still to come…
•    Google+ teams are working feverishly to add the highest priority features currently lacking…
•    The quality of “the platform” will enable developers to truly add value once that door is opened…
•    There is no definitive timetable for the release of business profiles…
•    Google+ is committed to “getting this right,” and that is more important that rushing features into the platform to satisfy demand…
•    Brad is one seriously smart individual. Just Google him and check out his track record. It’s impressive, to say the least…

Explosive Growth…and Yet Still a Work in Process? Discuss!

The single biggest thought I had after listening to the totality of Brad’s commentary multiple times was this: Google+’s growth has been explosive…and the product is far from “done.”  What will Google+ be – and how much more might people embrace it – when it IS done?

(And I say that NOT because of anything Brad said – he was consistently humble, understated and frequently apologetic for the “unfinished” nature of Google+ – but from my own observations and thinking.)

As a user of Google+, and as one who is already on record as recommending Google+ for my industry (and for everyone, really), I just want to give Brad a big THANK YOU.

I thought it was telling that a man in his position would take time out of his life (on a Sunday afternoon, no less) to meet with a group of ordinary people to get their input on his technology.

And the way he ended his response to the last meaningful question of the session – “What’s the one thing you would want users of Google+ to hear from Google+? – was also telling and indicative of his commitment to getting Google+ right:

We’re getting lots of love from the community…it’s just that, you know, we want to make it better.”