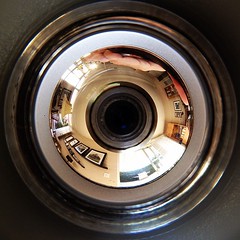 Ok ok, I know that gadgets aren’t supposed to be my beat here at InmanNext™. But I couldn’t resist. Ever since I supported Kogeto’s Kickstarter campaign I’ve been eagerly awaiting the arrival of my Dot. It arrived yesterday.

Dot is a lens attachment for iPhone 4 and iPhone 4s that lets you make 360 degree video. But to get from boring old not-360 video to whirling madness video there are several components to the entire system:

Put it all together and you get 360 degrees of video fun, for less than a hundred bucks:

As fun as Dot is, and it is fun, there are some areas in the above systems that will frustrate those of you who don’t bleed for fun new toys.

Dot’s design features a plastic protective covering over the lens. Even though this covering has some anti-reflective coating, it’s very prone to catching and reflecting strong light sources (lamps, the sun, etc). This leads to visual highlights in places where you don’t want them. In the video above I purposely shot it before the sun came up to see how it handles in diffuse light. The result was the even band of washout light about 1/3 up in the frame.

Looker, the iPhone software, does all of the video dewarping using the iPhone’s processor. That’s a lot of work for an iPhone processor. The result is that it takes a long time for a video to be ready to watch. The example above took 20 minutes on an iPhone 4.

Processor intensive tasks like dewarping video are perfect candidates for cloud processing–upload the video to the cloud and let the server farm chew on it. Easy for me to say, though. Kogeto, let’s remember, is just starting up.

Looker could also benefit from some light video editing functionality. Since you hold the camera face-down to shoot a 360 video but you need to touch the screen to start and end recording (at least on the iPhone 4) there’s always an odd flip-over spot at the beginning and/or end of the video. It’d be nice to be able to trim that off (maybe before processing even).

Focus is also a problem but probably only on the iPhone 4. The 4s has autofocus.

Dotspot, the upload repository for all of the 360 video you make is pretty straightforward. It could definitely use some interface tweaks to make description editing and embed functionality a little more obvious (tip: to get the embed code you have to play the video).

Even though it’s a little rough around the edges Dotspot does make a nice clean page for you to share your 360 content, including commenting, friending, favoriting, liking and all the other stuff you’ve come to expect in a media platform.

The light artifacts are going to keep you from wanting to use it in a professional manner on your projects and the wait time of dewarping video is going to make the learning curve of getting good results from it lengthy.

But Kogeto’s Dot is a ton of fun for the price, like a plastic novelty camera. If you want to maintain your techno-hipster cred you’ll have to get one.

Specific real estate usage at this point might include helping remote buyers get a sense of rooms or spaces. It would also make for some fun high-tech low-fi content on a community blog.

If you like insane dogs, you’ll get a kick out of this Dot-enabled 360 video: