Real estate brokerage and franchise giant Realogy Corp. is preparing to go public again, nearly six years after the company was taken private by a hedge fund at the height of the housing boom.

The 2006 deal to take Realogy private was highly leveraged — the parent company of such famous brand names as Century 21, Coldwell Banker and ERA Real Estate says it had $7.23 billion in outstanding debt as of March 31.

A plan filed with regulators today by Realogy’s parent company, Domus Holdings Corp., details the company’s hopes of wiping out $3 billion in debt by issuing up to $1 billion in new shares and converting $2 billion in convertible notes into common stock.

Realogy laid the groundwork for the plan in 2010, in a debt restructuring that turned $2 billion in bonds into convertible notes that can be exchanged for shares of common stock. If the holders of those notes agree to convert them into stock, that would save Realogy $232 million a year in interest expenses.

That Realogy is now proceeding with plans for an initial public offering indicates the company’s confidence in a housing market recovery.

"We believe that our business is well positioned to benefit from a sustained recovery in the residential real estate market as a result of our scale, market leadership, breadth of complementary service offerings and operations, and the substantial brand equity of our portfolio of brokerage brands," company executives said in a regulatory filing.

The Securities and Exchange Commission must sign off on the plan, and the timing of an IPO, the number of shares to be offered, and at what price remain to be determined. Domus said funds affiliated with Apollo Management Holdings L.P. will continue to own a majority of the voting power of Realogy’s outstanding common stock, and that Realogy would be considered a "controlled company" for corporate governance purposes.

A company spokesman said Realogy executives were not available to comment, because of regulations governing communications before an IPO. But the S-1 registration statement filed by Domus for the IPO details Realogy’s past performance, finances and strategy for the future.

In the first five months of 2012, the volume of completed home sales companywide — average home sale price times the number of transactions — was up 12 percent from the same time last year, the company said.

"We believe that we are experiencing the beginning of a recovery in the residential real estate market," Domus executives said.

Realogy has already slashed $500 million from the company’s operating cost base since 2005, and has $2.1 billion in loss carryforwards. If the company can also reduce its interest expenses through an IPO, it says it would be in position "to generate significant free cash flow upon a sustained residential real estate market recovery."

Although Realogy posted a $441 million net loss on $4.1 billion in revenue in 2011, that included $666 million of interest expenses and $186 million of depreciation and amortization. Adjusted earnings before interest, taxes, deductions and amortization (EBITDA) totaled $443 million.

Realogy is often thought of as a brokerage operator — its NRT LLC subsidiary is the nation’s largest broker — but its most profitable business is providing franchise services such as marketing, technology and training to independently owned brokerages.

Realogy is also a leading player in relocation services, and operates a title and settlement services business. 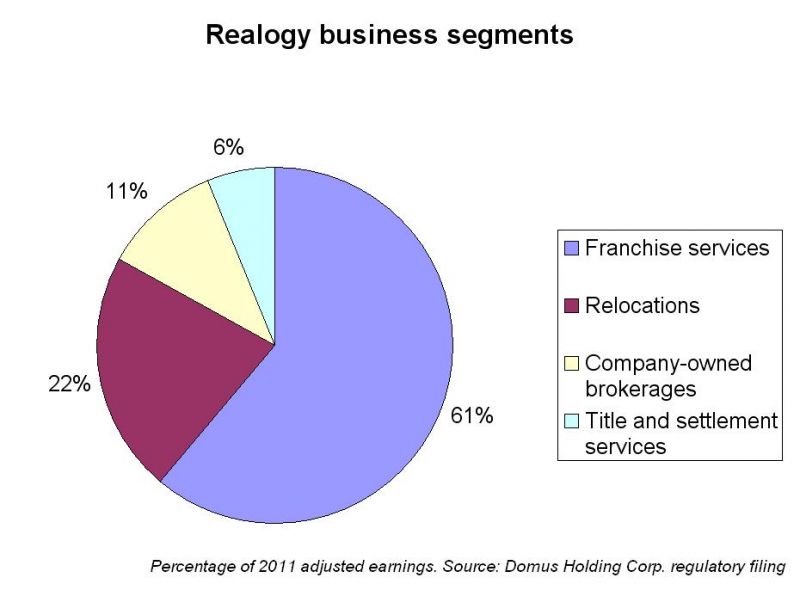 "Our four complementary businesses and mortgage joint venture work together to form our ‘value circle,’ allowing us to generate revenue at various points in a residential real estate transaction," the company said. "Unlike other industry participants who offer only one or two services, we can offer homeowners, our franchisees and our corporate and affinity clients ready access to numerous associated services that facilitate and simplify the home purchase and sale process."

Realogy estimates that brokerages it owns and brokerages it provides franchise services were involved in 26 percent of 2011 home-sale transaction volume involving a real estate brokerage firm.

One thing that Realogy can’t control are housing markets, many of which experienced dramatic declines in both sales and home prices during the downturn. 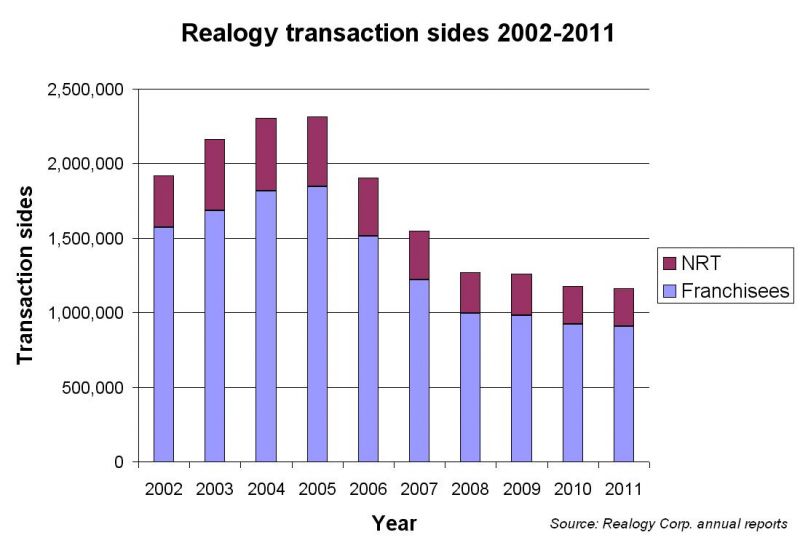 (A transaction side represents each instance in which a Realogy-affiliated agent represented either the buyer or seller in a home sale. Every home sale generates two transaction sides — in some sales, both "sides" are handled by the same broker.)

Realogy company-owned brokerages operating under the Coldwell Banker, Sotheby’s International Realty, ERA, Corcoran Group and CitiHabitats brand names closed 254,522 transaction sides in 2011, virtually unchanged from 2010 but down 47.9 percent from a peak of 488,658 in 2004. During the first three months of 2012, Realogy company-owned brokerages closed 55,273 transaction sides, up nearly 8 percent from a year ago.

From 2006 through 2011, the number of residential real estate brokers and sales associates working at both Realogy-affiliated franchisees and company-owned brokerages declined by 23.4 percent, to 241,800 as of Dec. 31, 2011. That figure excludes commercial brokerages operating under the Coldwell Banker Commercial brand name. 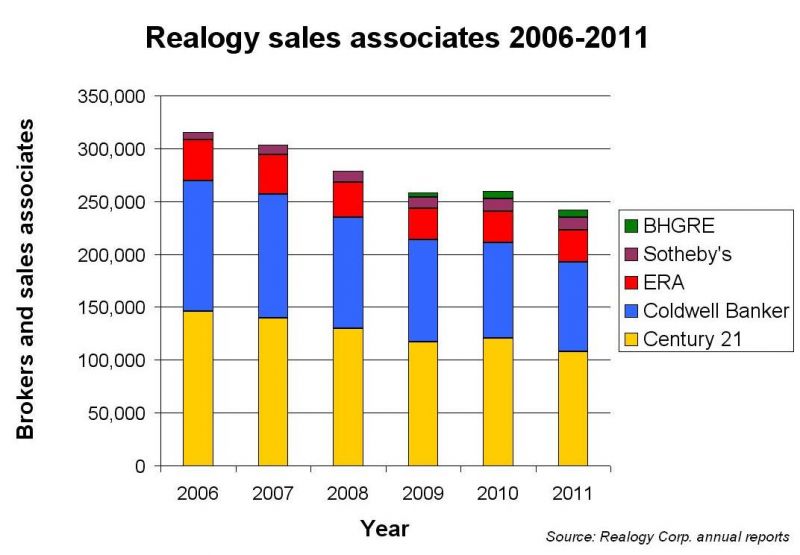 During the same period, membership in the National Association of Realtors declined by 25.6 percent, as the number of real estate professionals leaving the business greatly exceeded the number entering it.