If a six-month supply of homes for sale represents a good balance between demand from buyers and sellers, homes in balanced markets will typically be listed for about six weeks before they sell, the National Association of Realtors said today in announcing a new metric, median days on market.

While days on market can be pulled from statistics maintained by local multiple listing services, the task is complicated because sellers sometimes take their homes off the market and relist them.

NAR is tapping monthly member surveys the trade group uses to generate its "Realtors Confidence Index" to calculate the new median days-on-market figures, which will be included in future news releases on existing-home sales.

Median time on market includes all listings, which can be misleading if an influx of fresh listings skews the calculation downward, NAR noted.

From 1987 through 2011, time on market was typically 6.9 weeks, NAR said. During that time, NAR’s data on existing-home sales showed the supply of inventory averaging seven months, indicating slightly less demand from sellers than in a balanced market.

In periods where for-sale inventory amounted to a six-month supply of homes, median selling time was just over six weeks. When inventories dipped to an average of 4.3 months during the boom years of 2004 and 2005, median selling time dropped to four weeks. Time on market peaked at 10 weeks in 2009 when there was a 10-month supply of homes for sale. 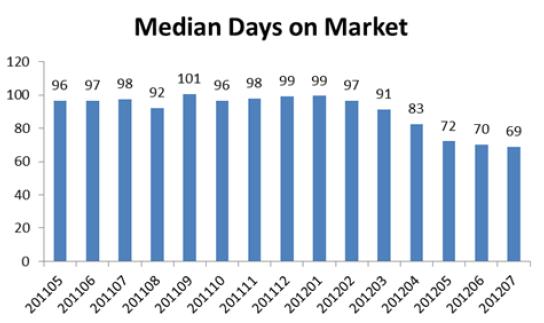 Factoring out short sales — which typically take three months or longer to sell — the median time on market for traditional sellers currently "appears to be in the balanced range of six to seven weeks," said NAR Chief Economist Lawrwence Yun.

Housing inventory and time on market correlates with rising and falling prices. If housing construction doesn’t pick up to normal within two years, Yun said a shortage of listings could lead to "above average" price appreciation.