The first week of every month brings the largest and freshest load of economic data. For once, don’t pay attention to it for three reasons: the data do not show meaningful change; the most important data by far is overseas; and third

The first week of every month brings the largest and freshest load of economic data. For once, don’t pay attention to it for three reasons: the data do not show meaningful change; the most important data by far is overseas; and third… for the next month, politics matter more than anything.

Before Tuesday evening, everybody could hear Brünnhilde warmin’ up.

At 6:57 p.m. Tuesday night my wife — Bronx-born native Democrat, 25-years an RN delivering babies, women’s rights combatant unimpressed by puffed-up males in white coats, as apolitical as I am a total junkie — came to sit on the couch. She did not move for an hour and a half.

I took out recycling, got some booze, read my book; she stayed put. She asked some questions about health care math, who Bowles and Simpson might be, but stayed glued to the show. Maybe one-third of the way in she observed, "Obama looks awful." A little past halfway, “If the election were tomorrow, I’d vote for Romney.”

Knock me over with a feather. Part of her reaction, I think: Romney did not have a tail, nor horns growing out of his head.

The greater surprise — after 18 months of televised bickering among unattractive Republicans, and an inert White House — is that anybody watched. Watch we did, 67 million of us, almost 20 million more than watched the first debate in 2008. And no political operative has a model for the consequences of epic grass-roots tweeting and e-yodeling during and after the debate.

The election is not tomorrow, and my wife and zillions of others may change minds more than once. However, instead of a minds-made-up election, this one may be an extraordinary deferred-decision election, boredom until showtime.

Back to data. The twin ISM surveys taken at the end of September found manufacturing activity improving from just below break-even 49.6 in August to 51.5, and the service sector from 53.7 to 55.1. These are not trend-changers, just stumbling on in the same mire.

Today every financial-political engine asserts discovery of meaning in a reported 114,000-job gain in September, an 86,000 upward revision in summer numbers, and a half-million people taking part-time jobs improving the unemployment rate to 7.8 percent. Give it up. Every one of these data points is miles within the range of statistical accuracy, let alone trend.

Remarks by Jack Welch (ex-General Electric CEO, aka "Neutron Jack"), asserting White House manipulation of jobs data, are harmful to us all. Give up on that argument. There is enough mistrust, and government stats are as straight as we can make them.

Long-term interest rates wrinkled upward at the jobs news, tons of people trying to find meaning in bonds, response to jobs and so on. Drop it. If anything, worried buyers of bonds sold a few on yet another hope for Euro-self-bailout, maybe Spain this weekend. Please.

Germany’s ISM number crawled back up to 47.4 from 44.7 but will be back below 45 before it sees 50. France fell to 42.7, comparable to rock-bottom here in 2009, but not at bottom there. China is below 50, now persistently so, even in official stats which everyone assume (correctly, there) are overstated.

The action is here. All polls agree that changes in the Senate will be minor, likely still a thin Democratic margin, not a working majority. To my surprise, the mass of ornery Tea Pots elected to the House in 2010 will be back, only a handful sent home. The largest numerical shift in the House since 1948 will remain in place, the hard-Right ego of Eric Cantor able to block his own party caucus and any legislation.

If Mr. Obama is re-elected, he will face exactly the same people and intransigence as in the summer 2011 budget wreck, plus fermented ill-feeling. Yet, it may take a Democrat to lead entitlement reform and cuts in future-promised spending.

On the other hand, perhaps only a Republican can get the House under control, and it may not matter what kind of budget deal gets done so long as there is one. Fast.

I know who I’ll vote for, but I don’t know if it’s right, or how it will turn out. I am certain only of how much is riding on how it turns out.

Chart thanks to Bill McBride, www.calculatedriskblog.com. There is no meaningful change, but all can see why the Fed would embark on QE3. 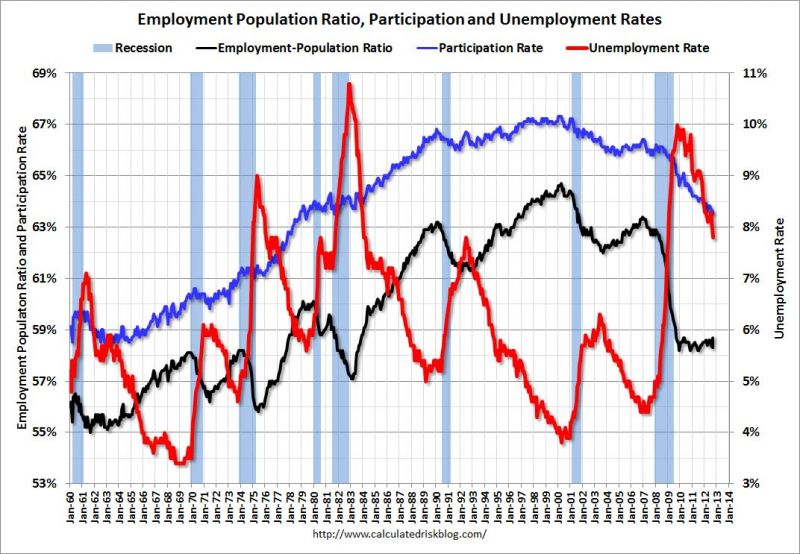