Cultivating a social media presence that is muscular enough to generate leads can be a protracted and time-consuming affair for real estate agents. But aspiring influencers may skid the wheels by getting other social media users, ideally ones with significant clout, to lend them a helping hand.

Cultivating a social media presence that is muscular enough to generate leads can be a protracted and time-consuming affair for real estate agents. But aspiring influencers may skid the wheels by getting other social media users, ideally ones with significant clout, to lend them a helping hand.

Seizing on this marketing strategy, New York City-based startup Saber Blast, which launched two weeks ago, provides a platform that makes it easy for marketers to forge social media partnerships.

A number of social media platforms allow professionals to closely monitor the activity of users of websites like Facebook and Twitter, and some brands may find them adequate tools for coordinating social media partnerships.

Customer relationship management and marketing suites like those provided by SalesForce and Adobe, as well as social media platforms including HootSuite, TweetDeck and Viralheat, already provide real estate agents with some features that could allow them to manage social media partnerships.

But unlike those platforms, Saber Blast is tailor-made to nurture social media alliances and streamline cross-promotion between marketers.

In one broad stroke, a user may blast out emails to contacts asking for them to promote certain content. All of those contacts can act on such requests by visiting websites individually and posting the content. But those who sign up for Saber Blast may fulfill them in just a few clicks. 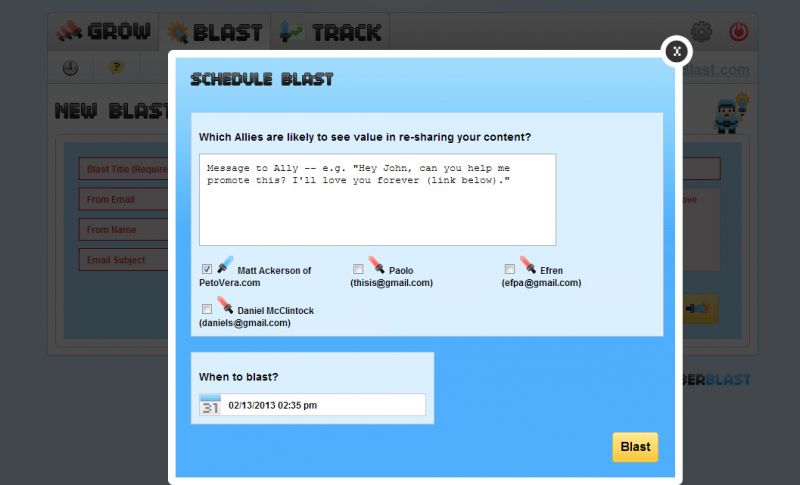 When scheduling blasts in Saber Blast, users can select which "allies" are most likely to see value in re-sharing.

After sending a blast, users may use the platform’s analytics component to view real-time stats that measure the blast’s impact, including how many page views it garners.

"This is specifically designed to help its members find new customers, unlike Hootsuite where you’re trying to beg people for (retweets) and re-shares," said Matt Ackerson, founder of Saber Blast. "It’s about categorizing people into different target markets and helping to try and match you up with people."

To help users form alliances, Saber Blast enables them to import prospective partners through their Gmail and Facebook accounts, and send them invitations to join Saber Blast for free. Invite-only accounts allow users to form up to three alliances. A $20-a-month "apprentice membership," meanwhile, caps an alliance roster at 20.

Saber Blast also helps users identify potential allies who already have accounts on the platform by recommending partnerships with users who share their target demographics. "Real estate" and "home/garden" are two interest categories that agents may check off to help Saber Blast match them with potential partners.

But while Saber Force may be effective at helping marketers incubate social media partnerships, it also makes it easy for them to overwhelm contacts — especially those who are not signed up for Saber Force — with a cascade of pleas for promotion.

To avoid turning off contacts, users would probably be well advised to customize their blast requests and frequently promote partners’ content.