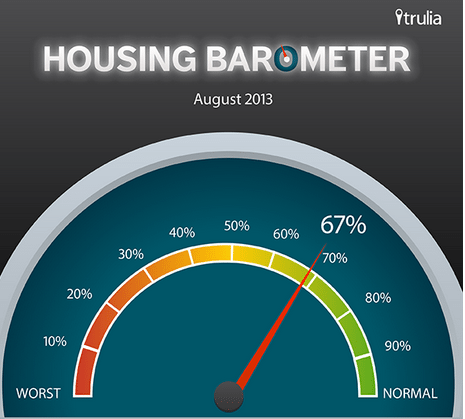 Here’s one sign that today’s housing recovery is not your average rebound.

Trulia has decided to scrap its “Housing Barometer” because it says the metrics that the index uses to gauge the market recovery — ones that might normally provide a telling snapshot of its health — no longer mesh together to produce an easily digestible picture.

That’s because the three metrics that the indicator uses — construction starts, existing-home sales, and the delinquency and foreclosure rate — show seemingly schizophrenic symptoms that confound the index’s ability to diagnose the market’s health.

Why is it that today’s market, were it a human patient, might be prescribed antipsychotics?

What’s throwing the index off is that improvements in existing-home sales and delinquency and foreclosure rates have far outpaced improvement in construction.

“When we titled the first Housing Barometer post ‘Are we there yet?’ the answer was clearly ‘no.’ Now, ‘Are we there yet?’ is no longer a yes-or-no question: The answer is yes and no, depending on which aspect of the housing recovery you look at,” said Jed Kolko, chief economist at Trulia.

Kolko has said construction has lagged because even though there’s a shortage of listings, the market does not have an actual supply shortage. A glut of unlisted foreclosures in many markets means vacancy rates remain elevated.

Another reason cited by Trulia for sluggish construction growth is that household formation, which fuels demand, is only half its normal rate.

Trulia’s final and most recent Housing Barometer found that the housing market was 67 percent back to normal in August, its healthiest state since the Great Recession.

The barometer was based on the following data:

Tapering could threaten 'already feeble' recovery
Back to top
Only 3 days left to register for Inman Connect Las Vegas before prices go up! Don't miss the premier event for real estate pros.Register Now ×
Limited Time Offer: Get 1 year of Inman Select for $199SUBSCRIBE×
Inmanpot
Log in
If you created your account with Google or Facebook
Don't have an account?
Create an Account
Forgot your password?
No Problem