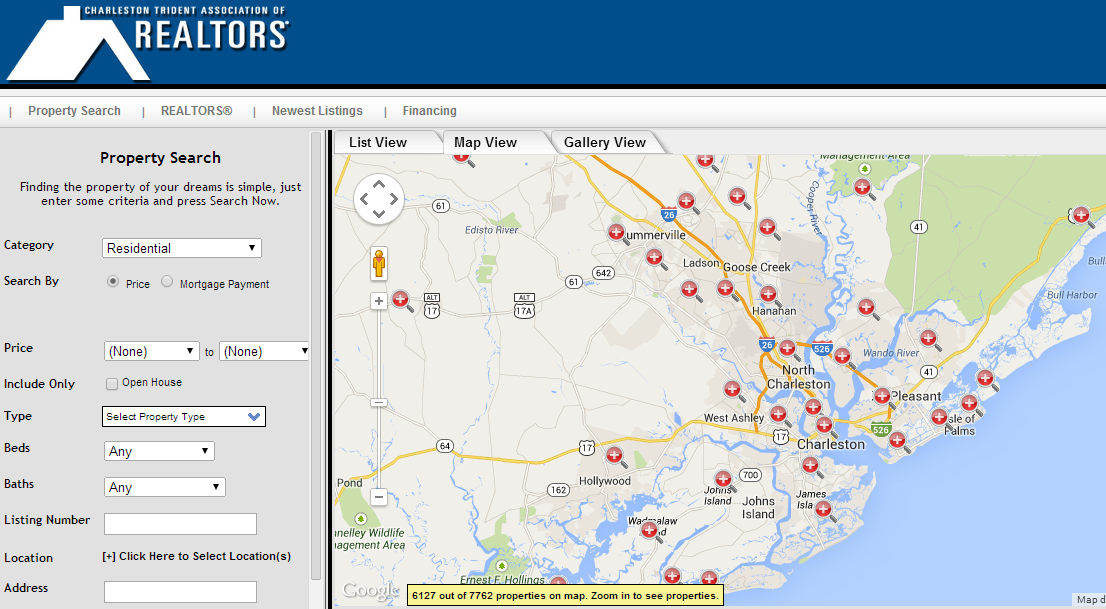 The Charleston Trident Multiple Listing Service will get a new MLS platform from real estate technology firm FBS this fall and eliminate its public-facing listing site in the transition.

The site, mls.charlestonrealtors.com, has been powered by FBS rival Solid Earth for the past five years, but hasn’t gotten much traction in the Charleston market, according to CTMLS spokeswoman Meghan Weinreich.

“We just weren’t really seeing the traffic on our side of it,” largely because CTMLS hasn’t invested a lot of resources advertising the site, she told Inman News.

“Other priorities have taken precedence. Some of them being increasing accessibility to technology tools and other third-party services to the MLS. [Such as] ShowingTime, CRS, CloudCMA.”

CTMLS feels reallocating staff and funds from the consumer portal to expanding members’ “toolbox” is a better value for members, she added.

Over the last five years the MLS’ board of directors has evolved to be more “member-centric” than “consumer-centric,” Weinreich said.

“The brokerages in our area are serving the consumers’ needs really well, so rather than duplicate the effort and potentially pull traffic away from them, we didn’t want to … continue to have a consumer portal that isn’t really serving anybody well,” she said.

“So it’s not something that we’ve advertised in the past and it’s not an initiative that our board really supports, so we just choose to have our local brokerages take the lead on that.”

While she is well aware of The Realty Alliance’s opposition to public-facing MLS websites, she said complaints from brokers were not a reason behind the decision to get rid of the site, perhaps because the MLS had not put advertising behind the site.

If the MLS had decided to promote the site, “I think they would have expressed concern about us pursuing it,” Weinreich said.

Moreover, “brokerages that are part of The Realty Alliance have always been part of our MLS discussion,” she added.

Indeed, of the 11 members of CTMLS’ board of directors, at least three belong to firms that are part of The Realty Alliance. This includes Ann Whalen, board president and broker in charge at Coldwell Banker United, Realtors; board vice president Rob Woodul, broker in charge at Carolina One Real Estate; and Kim Esarey, a manager and broker at Coldwell Banker United, Realtors.

South Carolina-based CTMLS, which is owned and operated by the Charleston Trident Association of Realtors, plans to make the flexmls platform available to its more than 4,500 members in late September with a final cutover date of Oct. 1.

FBS’ flexmls platform is currently used by 134 MLSs representing 110,000 subscribers, according to a recent survey from real estate consulting firm Clareity Consulting. The survey found that flexmls ranked second in end-user satisfaction among platforms with 10 or more MLS accounts and fourth among platforms overall.

“The technology and feature set this platform is built on will help our CTMLS members work faster, smarter and with greater efficiency than ever before,” said Joseph Cullom, CTMLS’ executive director, in a statement.

“Features like retina display photos, layered mapping and a highly functional mobile MLS will provide our members with an entirely different and enhanced MLS experience.”

The conversion to flexmls will not increase fees for users, “despite the significantly enhanced capabilities of the new system,” CTMLS said.

Flexmls works on any browser and on mobile devices, including iPads, through the platform’s HTML5-based mobile site, Flexmls Mobile.

“Need to add a quick photo while you’re out at a client’s property? Done. Use your tablet or mobile phone to take a quick shot, log into FlexMLS Mobile and upload it immediately,” CTMLS said.

All third-party tools currently available to CTMLS members will transfer to the new system, the MLS said.

A group of more than 30 real estate professionals, including residential agents and brokers, property managers and appraisers, chose flexmls after a search process that began more than a year ago. The group put out a nationwide request for proposals and chose from among four finalists in December.

CTMLS has set up a website, www.yourmlsupgrade.com, to keep members informed through the conversion process.