by Max Galka
Share this article
You successfully shared the article.
Close

Now that Zillow and Trulia are merging, many are predicting “game over” in the listing portal space. Already the two most trafficked real estate websites individually, a combined “Godzulliow” may be on the verge of total domination of the industry, the Amazon.com of home search.

Now that Zillow and Trulia are merging, many are predicting “game over” in the listing portal space. Already the two most trafficked real estate websites individually, a combined “Godzulliow” may be on the verge of total domination of the industry, and to becoming the Amazon.com of home search.

However, there is an equally compelling narrative that points to the complete opposite outcome. Many of the best and brightest from a wide range of industries have set their eyes on the listing portal space, taking the bet that both Zillow and Trulia are outdated technology and ripe for disruption.

The case for Zillow-Trulia dominance is an easy one to make. Since 2012, they have been the Web traffic leaders of the real estate industry, and their lead has only increased with time. Combined, they receive 25 percent of U.S. real estate Web traffic, according to Experian Marketing Services, which is 3.5 times as much as their nearest competitor, realtor.com. 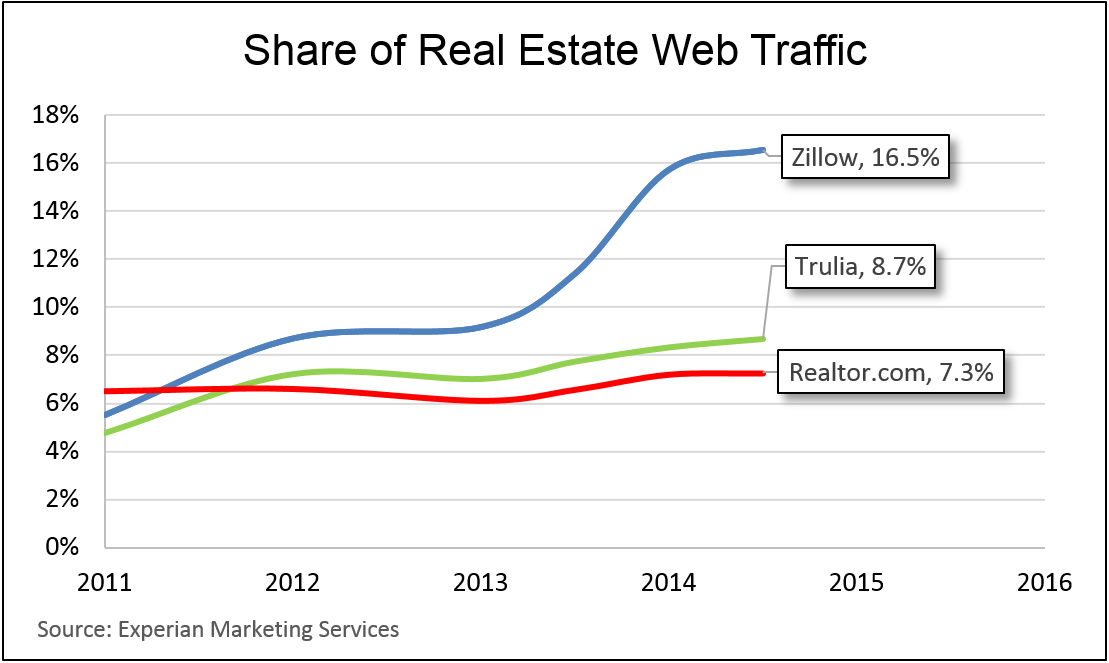 Zillow says it plans to keep the Trulia search portal and brand alive. Given Zillow and Trulia’s dominance while operating separately, it is difficult to see how other portals will even be competitive once they have teamed up. This concern seems to be shared by the Federal Trade Commission as well; it has requested an additional round of information for its review of the deal, implying antitrust concerns.

However, if Zillow-Trulia really will be unstoppable, there are at least a few companies that have not yet taken notice that the war for online dominance is over. This year has seen an unprecedented amount of activity in real estate technology — both in terms of mergers and acquisitions (M&A) and venture capital investment.

Moreover, the size, diversity and power of the businesses involved in these transactions is staggering. Below is a list of some of the powerhouses that are now challenging Zillow-Trulia for control of online home searches in the U.S.: 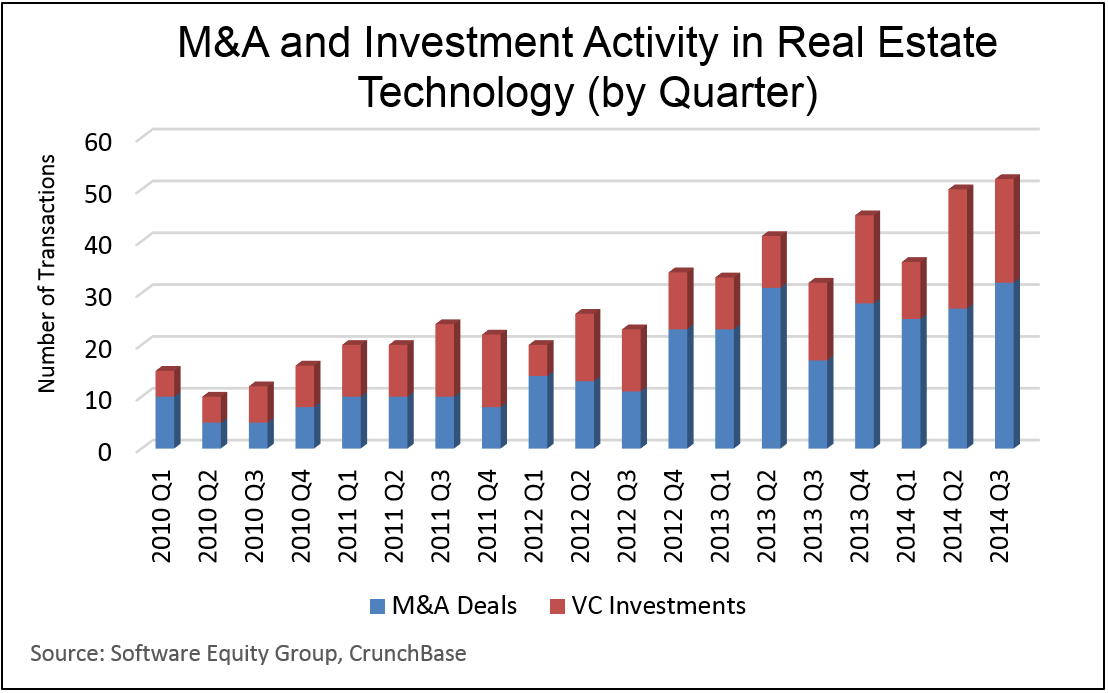 Given Zillow and Trulia’s long-standing track record of dominance, what opportunity do these companies see?

Both Zillow and Trulia launched in 2005. Since that time, technological innovation in other industries has completely transformed our world. To give some examples of just how far technology has advanced, in 2005 most households still owned cathode ray tube televisions, the iPhone was still two years away from being invented and Facebook was nothing more than a novelty used by a few university students. Each of these has clearly undergone massive innovation since that time, yet the process for finding a home has remained more or less the same.

A plausible explanation for this lack of innovation is the declining housing market. With housing transactions trending downward since 2005, real estate has hardly been the most attractive sector for innovation. As a result, Zillow and Trulia have spent their lifetimes operating in a relatively friendly environment, largely free from would-be disruptive challengers. But with the housing market now poised for recovery, that environment is about to change. 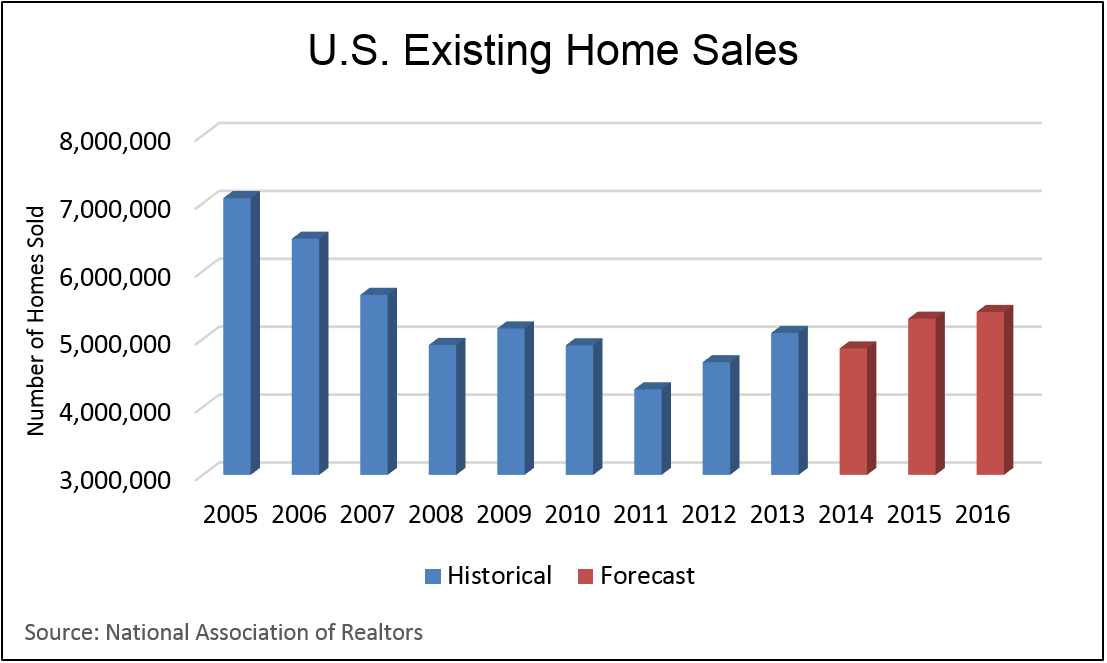 Whatever the reason may be, a multitude of businesses from a wide range of industries have entered the space with the goal of revolutionizing online home search. After nearly a decade of unchallenged growth, Zillow and Trulia will have to defend their position against a powerful lineup of adversaries armed with new and innovative technologies.

What do you think? Has Zillow-Trulia already won the war for consumer eyeballs? Or are they an outdated technology soon to be disrupted?

Max Galka is co-founder of Revaluate, a member of Code for America’s BetaNYC Brigade, and a participant in the New York City Open Data Working Group.