Real estate brokers and agents will spend less money on online advertising this year, as the great migration of marketing dollars from traditional media channels to the Internet plateaus, an annual analysis of real estate ad spending by Borrell Associates Inc. predicts.

But Borrell’s 2015 Outlook for Real Estate Advertising predicts that with agents and brokers now spending 75 percent of their ad budgets online, digital channels may have reached a saturation point.

The report estimates that real estate agents and brokers spent $13.6 billion on all forms of advertising in 2014, up 7.9 percent percent from the year before. This year Borrell predicts that total ad spending by agents and brokers will rise by a much more modest 2.2 percent.

More startling, the company forecasts the share of agent and broker ad dollars spent online will actually decline — from 78.5 percent in 2014 to 75.6 percent this year. Online ad spending by agents and brokers is projected to decline by 2 percent this year, to $10.5 billion.

If that comes to pass, it could indicate that brokers and agents think they’ve reached “an optimal ratio” of online vs. offline ad spending — about 75 cents of every dollar — the report concludes. 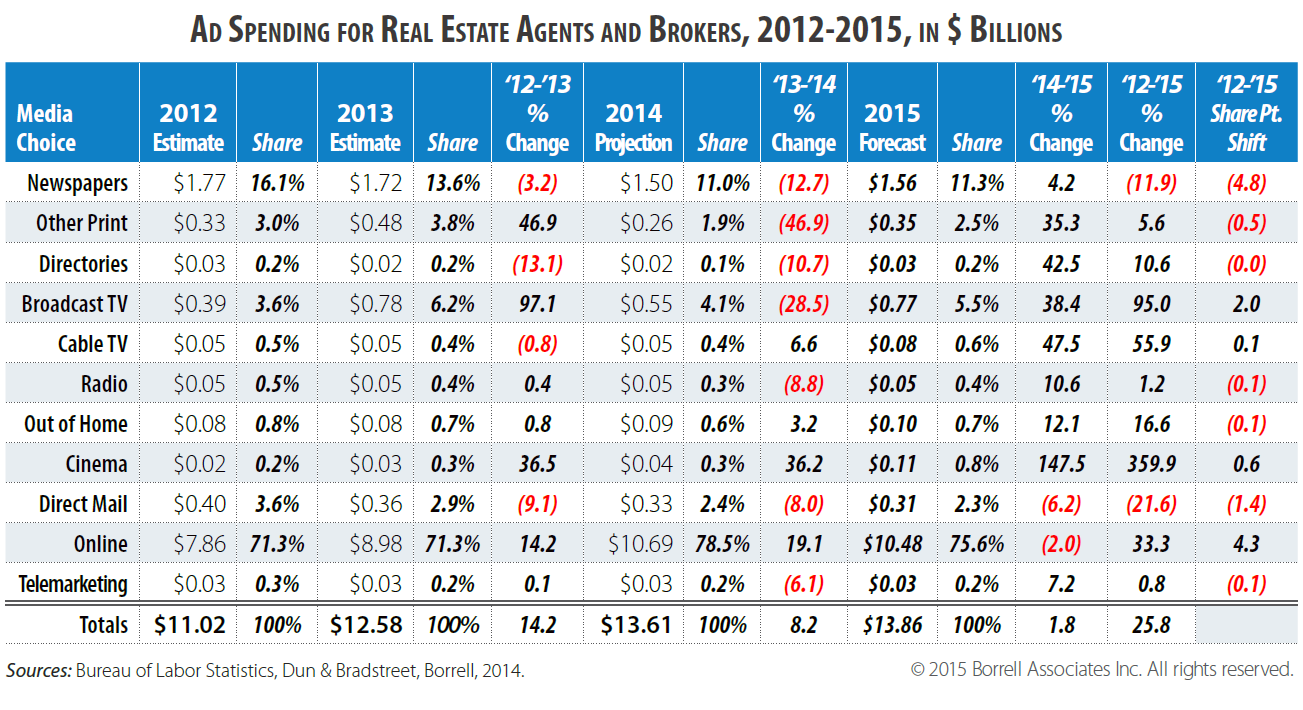 Right-click on table to enlarge.

The fact that agents are scaling back could even mean that “75 percent may be too much to devote to one medium,” the report concludes. “Furthermore, this is one of the rare categories that will actually see a decrease in targeted online display revenue by 2019.”

The report surmises that having come early to the Internet, real estate advertisers “have reached their optimum mix of ad spending” having learned what works — and what doesn’t.

“For many, buying keywords (“house for sale in Peoria”) has given way to search engine optimization (SEO),” the report said. “External advertising has been replaced in many cases by website, mobile and mapping initiatives.”

Another reason that the share of real estate broker and agent ad dollars spent online could decline is that several major real estate franchisors are expected to mount television and cable initiatives this year in hopes of prodding millennials and other reluctant homebuyers to get off the fence, the report said.

The report looks at advertising expenditures by all companies in the real estate business, and forecasts that agents and brokers will continue to be the biggest spenders in the category in 2015, accounting for almost 44 percent of the projected $31.8 billion total. Mortgage lenders are expected to be the next biggest spenders, accounting for 39 percent of the total real estate ad spend, followed by rental property managers (10 percent) and real estate developers (7 percent).

Spending by rental property managers is expected to grow by nearly 14 percent this year to $3.3 billion, as “demand for rental living space is hot and has remained so since the beginning of the recession,” the report said.