In a major overhaul of its agent matching tool, Zillow has revamped searches of its vast agent profile database by adding new search filters that allow consumers to see which agents in a particular city, neighborhood or ZIP code have the best reviews, the most recent sales or the greatest number of listings.

Home shoppers can drill down further on the revamped “Agent Finder” platform based on other criteria including price point, property type, agent type (buyer’s agent or listing agent), and specialties such as relocation or short sales and languages spoken.

Consumers can then sort their search results to surface the agents with the most recent sales, most listings, most “active” or best reviews in their search area. 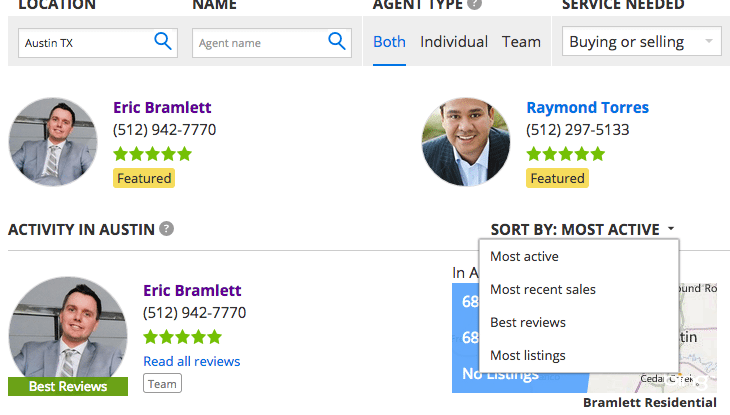 Consumers can sort agent search results by most “active,” most recent sales, best reviews and most listings.

Past attempts to help consumers find agents by making performance data searchable — by realtor.com, Redfin, the Houston Association of Realtors and NeighborCity — have all met with resistance from agents, who have complained that the statistics associated with them are not always accurate, or are incomplete.

If consumers are able to search for an agent by the number of listings they currently represent or have sold in the past, new agents or agents who are members of teams may be at a disadvantage, some have complained.

This latter feature could prove controversial for Zillow if history is any judge. Zillow’s chief rival, realtor.com, piloted an agent-search platform in 2013, AgentMatch, that it had to shutter based on industry pushback.

Zillow’s revamped agent search platform also features a set of three agent ads that show up at the top of search results.

Three “featured” agents show up at the top of the search results on Zillow’s revamped “Agent Finder” platform.

Zillow has been traveling the country, encouraging agents to build out their profiles with reviews, ratings and transaction histories, and the number of agent profiles and reviews have taken off, helping the firm become the “Google of real estate.” Currently more than 780,000 agents have Zillow profiles, which are free for agents to set up.

Up until now the profile side of Zillow has been an ad-free ride for agents, but that has ended.

Zillow doesn’t have a separate ad product for agents to target exposure on Agent Finder. The Premier Agents that currently pay to show up on homes in a certain ZIP code now are included automatically on the agent search tool, at no cost, according to Zillow Group spokeswoman Amanda Woolley.

Woolley wouldn’t say whether Zillow has plans to develop an Agent Finder-specific ad product or if the ad impressions that accrue there will begin counting against the impressions Premier Agents currently buy in a ZIP code.

The other top portals, realtor.com and Trulia, also have built out large databases of agent profiles. Currently they don’t include agent ads.

Trulia, which now lives with Zillow under Zillow Group, revamped its agent profiles last summer with unfiltered agent ratings and reviews. Realtor.com is moving toward including ratings and reviews on its agent profile platform this year after the National Association of Realtors passed policy recommendations at its annual convention last fall that opened the door for the portal to do so.

Real estate agent ads on portals in the Internet era has primarily focused on listings, but as agent profiles on the profiles become richer, that could change. Consumers might soon go straight to the portals’ agent databases to research agents and find the best one for them.

Realtor.com experimented with this idea with AgentMatch, the controversial agent-search platform it tested in two markets in 2013. The tool faced pushback from agents who didn’t like the tool’s ranking feature or that it used multiple listing service data, in part, to spotlight agents, and was shuttered before the year ended.

Agents frequently tell Zillow that online reviews are an important part of their marketing efforts and that increasing their online presence has generated more business, said Jay Thompson, Zillow’s director of industry outreach, in a statement.

“We’re thrilled to give agents another way to highlight their areas of expertise and local knowledge to connect with home shoppers on Zillow,” he said of Agent Finder.

To highlight their expertise, real estate agents can update their Zillow profile with skills, past sales, active listings and client reviews.

Zillow began automatically adding transaction histories to agent profile pages last fall, but Zillow appears to be acknowledging that some sales may fall through the cracks by also encouraging agents to upload sales themselves.

Many of the millions of consumers who visit Zillow every month haven’t settled on a real estate agent yet, said Amy Bohutinsky, Zillow chief marketing officer.

So “being able to evaluate an agent based on his or her local reputation, experience in a given area, as well as individual expertise, is incredibly useful for buyers and sellers,” she said.

Editor’s note: This story has been updated with information about the agent ads that show up on Zillow’s revamped “Agent Finder” platform.