In addition to talking about housing bubbles, another topic that is becoming popular among housing scaremongers is the ongoing decline in the U.S. homeownership rate.

The data that everyone uses to track homeownership is provided by the U.S. Census Bureau, which publishes quarterly stats on ownership rates dating back to 1965.

For the purposes of this discussion, I have highlighted three presidential terms: two under President Clinton and President George W. Bush’s first term. 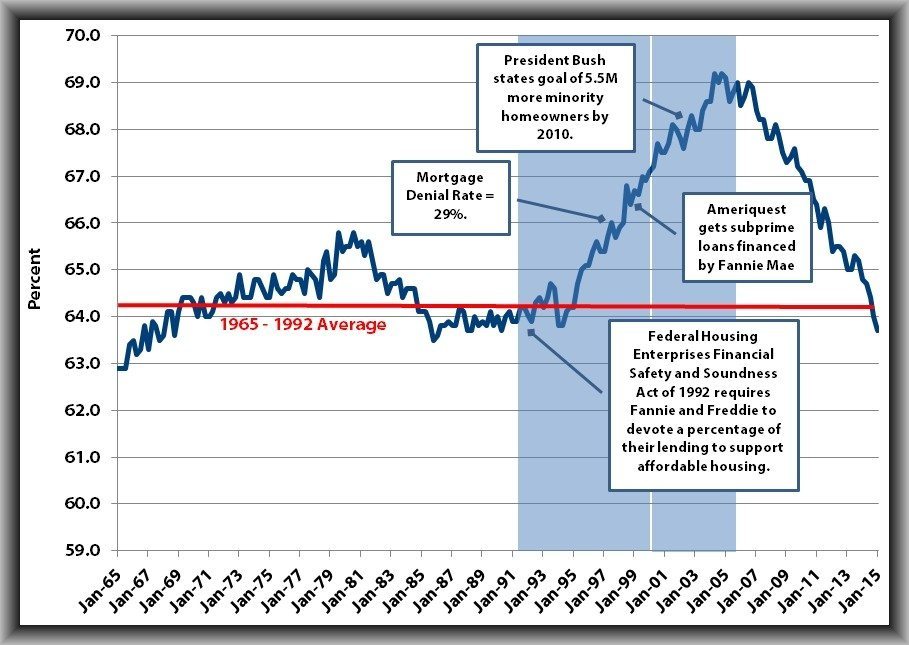 The “boom times” for housing primarily started after the election of President Clinton, who went to remarkable lengths to encourage homeownership.

Readers might remember the 1994 National Homeownership Strategy, when Clinton directed HUD to come up with a viable plan to increase homeownership. And it worked — during the Clinton administration, homeownership rose from 64.2 percent to 67.1 percent.

During the Clinton administration, homeownership rose from 64.2 percent to 67.1 percent.

During his first term, President Bush continued the practice of encouraging homeownership, as it dovetailed with his Ownership Society goals.

His and President Clinton’s efforts led to the highest homeownership rates on record. It peaked at just over 69 percent (about 5 percent greater than record-keeping averages). But as we all know now, it also led to the burst of the biggest housing bubble in our nation’s history.

Yes, ownership rates skyrocketed, but the market was artificially inflated and unsustainable. Homeownership rates have since dropped to 63.7 percent, but this is only marginally below the long-term average of 64.3 percent. Hardly calamitous, as some are suggesting.

That said, I do think that that the rate could fall a little further. Now, before you start blaming the millennial generation — stop, because they are not the ones leading this charge. As a side note, I do feel rather sorry for this group, as they appear to be taking the brunt of any and all economic woes at the moment.

If we look at homeownership rates by age, between 1994 and today, the decline in homeowners under the age of 35 is 2.5 percent. A palpable drop, but slight when compared to 35- to 44-year-olds who have seen their numbers fall by 6 percent from 64.4 percent to 58.4 percent.

Why? Because this group took the largest hit following the housing crash, and many lost their homes to foreclosure.

Circling back to millennials, it’s true that this group is more subdued about homeownership — and there’s good reason for it. Millennials comprise a smaller share of married couples and a higher share of city dwellers versus suburbs.

But their lack of growth might well be offset by middle-aged families who are thinking about getting back into homeownership again.

According to RealtyTrac, though millennials have received a lot of attention lately as the generation whose below-normal homeownership rates are changing the landscape of the U.S. real estate market, the boomerang buyers are also responsible.

Boomerang buyers — who are primarily Generation Xers or baby boomers — represent a massive wave of potential pent-up demand that could shape the housing market in the short term even more dramatically.

There are about 700,000 consumers who will become eligible to re-enter the housing market in 2015.

Data from TransUnion supports this theory, suggesting that there are about 700,000 consumers who will become eligible to re-enter the housing market in 2015. And up to an additional 2.2 million potential buyers will requalify over the next five years.

An additional 2.2 million potential buyers will requalify over the next five years.

It’s likely that these so called “boomerang buyers” will become homeowners again, which will do its part to offset the millennial drop and raise the homeownership rate back up to its historic averages.

So, have homeownership rates declined? Yes, but as the data and this analysis show, taking a simple “peak-to-trough” view of homeownership figures does not necessarily provide accurate results. Regardless of how many scaremongers declare otherwise.

Matthew Gardner is the chief economist for Windermere Real Estate. He is the former principal of Gardner Economics and has over 25 years of professional experience both in the U.S. and U.K. Follow him on Twitter @SeattleEcon.

7 wagers on the economic future

Fed is prepared to begin normalizing -- a euphemism for 'tightening'
Back to top
Only 3 days left to register for Inman Connect Las Vegas before prices go up! Don't miss the premier event for real estate pros.Register Now ×
Limited Time Offer: Get 1 year of Inman Select for $199SUBSCRIBE×
Inmanpot
Log in
If you created your account with Google or Facebook
Don't have an account?
Create an Account
Forgot your password?
No Problem