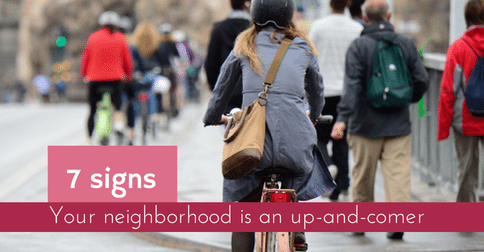 by Trulia Pro Blog |
You successfully shared the article.
Close

Real estate is an industry that’s all about your hyperlocal expertise. As an agent, you specialize in specific ZIP codes, home types, client types — you name it. This industry is as much about niche specialties as it gets.

That said, if you want to be the agent who blows away the competition and makes your business go gangbusters this year, you need to know how and when to expand your expertise into new areas of interest. And that means that you need to anticipate what neighborhoods are going to be super hot in the near future. If you establish yourself as the go-to agent in those markets now, there will be no stopping you in the future.

Here are the top telltale signs of a soon-to-be hot market. Play your cards right, and your business (and clients!) will thank you for it!

1. On-trend businesses are moving in.

In my neck of the woods, when a co-working space, a Whole Foods or a Blue Bottle coffee moves into the neighborhood, it’s a sign that the nature of things might be changing. This is just as true for small, local businesses that attract people with disposable income as it is for businesses that sell the basics with flair. In fact, most larger businesses do a fair amount of economic research and projections on the neighborhood before moving in. Watching big industry and business moves can be a great way to spot emerging areas with strong fundamentals way before other agents might otherwise be able to see them.

2. Uber-convenient location in a land-impacted metro.

If you live in a densely populated metro area — especially one that is coastal — or an urban setting with intense governmental restrictions on building, demand for homes will continue to grow as the population does, but the supply will remain somewhat limited. In many of these situations, neighborhoods that have been downtrodden but have very convenient proximity to employment centers, public transportation, freeways and bridges tend to be prime for whole-neighborhood remodeling in times of population growth or rapid real estate price rises in already prime areas.

3. Downsides have an expiration date.

If there’s one major issue that has caused an area to be less desirable for decades, and that issue is being eliminated or ameliorated, it could set the neighborhood up for a turnaround. For example, striking crime decreases or a major employer moving into the area where none were before can spark a serious real estate renaissance in an area that has some of the other desirable features on this list.

Also, keep in mind that a new generation of homebuyers has a new set of values, and might simply not be concerned or deterred by things their parents might have viewed as turnoffs. Living above a commercial unit might have been a deal-killer for my parents, but my son thinks it’s cool — even desirable, depending on the business on the ground floor. Similarly, gritty and urban might not be the descriptors of your dream home, but some 20-something first-time buyers in major metros are seeking exactly that feel.

4. Architectural themes with a following.

Many up-and-coming neighborhoods find themselves pulled by aficionados of the particular type of architecture that characterizes the neighborhood. Often, down-at-the-heels neighborhoods that are riddled with Tudors, Victorians, Spanish-style homes or even midcentury moderns will see a surge of revitalization when a fresh generation of frugal homebuyers falls in love with the style and realizes the deals that can be had there vs. other, already prime areas in town.

5. At least one major economic development is brewing.

Never underestimate the power of a major economic development to overhaul a neighborhood’s fate. From Google and Microsoft building cloud storage data centers in Des Moines, Iowa, to a new light rail station going live in Denver, Colorado, one large-scale employer or infrastructure development can be a very early, very strong sign that an area will see its real estate fortunes rise. (That said, areas dependent on one near-obsolete employer or industry can see their fates decline rapidly. Look for industrywide investment in an area vs. a single company’s investment.)

When you see that an area long known for its run-down homes has a number of homes being renovated and rehabbed from the inside out, this can be a sign of fledgling neighborhood turnaround. If you spot these sorts of projects visually, it might be worth taking a trip down to the city building permit counter to see whether the staff has seen the same uptick in individual owners’ investment in the area, and if so, what they think the story of the neighborhood might be — or might become. City staffers often have a wealth of information at the ready, everything from pending commercial development applications that could change the whole landscape of an area to projects the city itself has funded or will prioritize due to its own development initiatives.

7. Slow but steady decrease in DOM (days on market)

Ten years ago, I listed a charming, pristine home on a not-so-charming, less-than pristine street — the location was its fatal flaw, and the place just lagged on the market as a result. Now, millennials buying their first homes are salivating over that precise location, for its mix of urban feel, new trendy restaurants and yoga studios, and complete convenience to both the subway and the Bay Bridge.

In between now and then, though, those who were watching carefully would have noticed how homes that once took 90 days to sell gradually were selling in 45, then in a couple of weeks — and would have noticed that this decline in the number of days an average listing stayed on the market occurred way before the home prices themselves increased. A slow, steady decrease in DOM is a smart, early sign that a neighborhood might be poised on the precipice of up-and-coming status.

Tell us! What are other signs you would add to our list?