It’s an Inman News tradition to report on the predictions made by economists at major trade groups for real estate in the coming year, and to look back to see whether what they said last year panned out.

Many experts didn’t foresee the massive disruption of credit and financial markets that took hold in 2007, and now threatens to e

It’s an Inman News tradition to report on the predictions made by economists at major trade groups for real estate in the coming year, and to look back to see whether what they said last year panned out.

Many experts didn’t foresee the massive disruption of credit and financial markets that took hold in 2007, and now threatens to extend well into 2008. So it’s perhaps no surprise that these trade group economists were all overly optimistic in their predictions for a "soft landing" in 2007, with sales dropping off more sharply than any had expected.

At this time last year, NAR chief economist David Lereah thought sales would stay relatively flat in 2007, and that overall home-price gains would be modest. Sellers were "becoming realistic about current market conditions and are now offering more competitive pricing," he said at the time.

As was also the case in 2006, Lereah’s projections for both new and existing home sales proved overly optimistic. The former NAR economist had foreseen existing home sales would "coast" in 2007, and stay essentially flat relative to the 6.48 million closings in 2006. Existing home sales are expected to total 5.67 million in 2007 — about 12 percent less than the 6.43 closings Lereah had anticipated.

Yun sees sales and median prices remaining essentially flat in 2008, but anticipates that sales of new homes will continue to slide along with median price.

"The unusual mortgage disruptions that peaked in August were clearly seen in lower home sales that were finalized in September and October, so the market was underperforming," Yun said in announcing NAR’s 2008 forecast. "Now that mortgage conditions have improved, some postponed activity should turn up in existing-home sales over the next couple of months, and I expect sales at fairly stable to slightly higher levels."

MBA Chief Economist Doug Duncan’s forecast of existing home sales for 2007 turned out to be much closer to the mark than Lereah’s, and Duncan’s expectations for that category in 2008 are also more pessimistic than Yun’s.

While Yun sees mortgage conditions improving and existing home sales remaining essentially flat, the MBA is predicting sales of existing homes will decline by about 13 percent, to 4.95 million.

At $2.32 trillion, 2007 mortgage originations will exceed Duncan’s forecast, but he predicts they are headed below the $2 trillion mark in 2008 – even if interest rates on 30-year fixed-rate loans fall below 6 percent.

Duncan did not anticipate that new home sales would plummet as precipitously as they did in 2007, but he’s now predicting more severe slackening in that category than the National Association of Home Builders. Duncan sees new home sales falling more than 14 percent in 2008, to 677,000 homes, while NAHB is projecting that builders will manage to close on the sale of 741,000 new homes.

"Given the huge overhang of unsold inventory in many parts of the country, a sharp pullback in housing starts is necessary for the recovery of the housing market,"  MBA forecasts. "Large builders reported that the demand for new home sales continues to trend down because potential buyers are waiting for prices to fall even more. Since demand is slowing as fast as builders are curtailing new construction, builders have not been successful at trimming inventory overhand and will need to cut home building further." 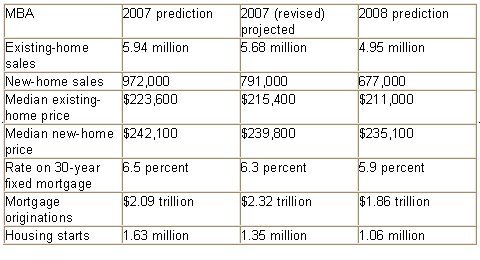 The most optimistic prediction for new home sales in 2008 comes from David Seiders, chief economist for the National Association of Home Builders. Although Seiders’ prediction for 2007 new home sales was far off the mark, his forecast for 2008 could end up in the ballpark if bargain hunters help builders close deals at a slightly reduced rate from 2007.

Like Duncan, Seiders sees a sharp pullback in construction as a prerequisite for a housing recovery.

The chief economist for the California Association of Realtors, Leslie Appleton-Young, produces an annual forecast for one of the most closely watched housing markets in the nation. After dodging depreciating home price, delinquency and foreclosure trends during the initial phase of the housing downturn, California is now experiencing the impact of subprime lending and resetting ARM loans.

"By price-range, the highest-priced markets – those with medians over $1 million — will show less stress," Appleton-Young said in releasing CAR’s 2008 forecast in October. "The lower-priced markets will continue to face fallout from the subprime crisis, tighter underwriting standards, and competition from new home developments where price-cutting has been even more severe."