by Bill and Kevin Burnett
You successfully shared the article.
Close

Q: I want to take down the wall separating my kitchen and dining room. How do I find out if it‘s a load-bearing wall and if it would be OK to do this? Who should I call to answer this question at a reasonable cost? Should I call an expensive structural engineer or a licensed remodeling contractor? Hopefully not an architect … they cost a small fortune!

A: An architect is not required and a structural engineer is probably overkill. An experienced licensed remodeling contractor should be able to provide this information.

If you’re going to do the job yourself, plan on compensating him for his time. If you’re planning on hiring the job out, your question will be answered as part of the bidding process. 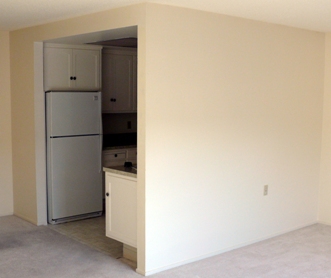 A bearing wall supports the weight of the structure and activity above it. In a single-story home with a stick-built gabled roof, the bearing walls are the exterior walls where the rafters rest. The load from the roof is transferred from the rafters to the walls and down to the foundation footings.

In addition, there may be one or more interior walls that support the ceiling joists. Ceiling joists are typically 2-by-4s. They will only span so far without sagging under the weight of plaster or drywall. Interior walls reduce the span and prevent sagging.

If the roof structure is built with prefabricated roof trusses, the bearing walls are typically only the exterior walls as the trusses are engineered and constructed to bear the load of the roof and the finished ceiling. …CONTINUED

We’ve had experience dealing with both situations. Back in the day, Bill lived in the hills above Hayward, Calif., in a two-story house that could only be described as chopped up. Just like you, Bill wanted to take out a kitchen wall to add more light and to open the floor plan up by creating a continuous kitchen/family room. Problem was, the wall ran perpendicular to the second-story floor joists and supported the second-story floor.

The solution was to bury a beam in the ceiling to pick up the load of the second-story joists. One end of the beam would rest on the framing of the outside wall, the other end on an interior partition. As we recall, the joists were 2-by-8s and the beam was a 6-by-8, spanning about 16 feet. We built a couple of temporary walls on either side of the intended beam installation and cut a space in the floor joists to accept the beam. 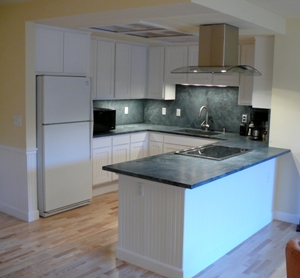 Being young and strong (and not too bright) we hoisted the beam into place. It was one heavy mother. Knowing what we know now, we should have rented a mechanical hoist to do the heavy lifting.

After nailing up joist hangers on the beam to accept the cut floor joists and connecting all the parts, we removed the temporary walls. After installing and finishing a drywall patch, the kitchen and family room became light-filled open space.

Today, Bill is in the middle of another kitchen remodel. Again looking for space and light, he is removing a wall between his kitchen and front room. Since his condo is built with roof trusses, the wall he is removing is nonbearing. A reciprocating saw took care of it lickety-split (see photos).

So, one way or another we think you can remove that wall. We suggest you start with a licensed building contractor who specializes in remodeling to assess your situation. Happy demolition.