by The Real Deal
Share this article
You successfully shared the article.
Close

NEW YORK — A Prudential Douglas Elliman report released today depicts the spectacular rise of home prices over the past decade, but also the sudden — and definitive — arrival of the real estate slump in Manhattan.

Editor’s note: This article is reposted with permission by The Real Deal. Click here to view the original article.

NEW YORK — A Prudential Douglas Elliman report depicts the spectacular rise of home prices over the past decade, but also the sudden — and definitive — arrival of the real estate slump in Manhattan.

Other areas of the country have seen real estate activity and prices decline gradually over the past few years, but the Manhattan real estate market was still booming until the Lehman Brothers collapse in the fall of 2008. In fact, Manhattan prices set new records in 2008. That year, the average sale price of a Manhattan apartment reached a new high of $1.59 million, while the median was $955,000 and the price per square foot was $1,251, according to the report. 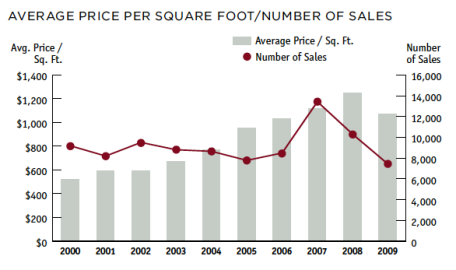 Brokers recall watching in awe as prices began their rapid ascent in the 2000s.

"A thousand per square foot — that’s a number that I never would have imagined," said Jeff Wolk, the president of real estate brokerage Fenwick Keats Goodstein, who has been a real estate agent in the city for 20 years. He recalled being flabbergasted when Manhattan apartments started selling for $30 and $40 million in the aughts. "Thirty million dollars for an apartment?" he said. "Those are stratospheric prices. We’re still talking about incredible sums, even though the market is off since the onslaught of the recession."

The aughts saw more price appreciation than either of the two prior decades, Miller said. The average sale price increased 96 percent throughout the 2000s, but it grew only 26 percent in the 1990s, Miller said. While he does not have specific data for the 1980s, he estimated that prices during the decade grew more than in the 1990s but didn’t match the monster increases of the 2000s, he said.

One reason for the dramatic price increase was the mid-2000’s construction boom of new condominiums. In 2000, co-ops represented 60 percent of the units that changed hands, but in 2009, that percentage had shrunk to 46 percent, while condos made up 54 percent. Co-ops still represent about three quarters of the total housing stock in Manhattan, Miller said. 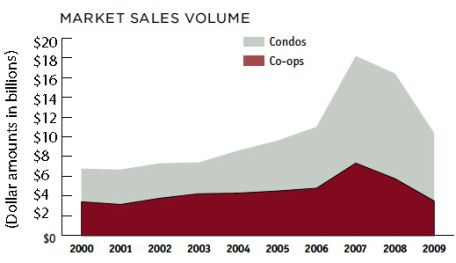 Because of the new construction, Manhattan’s housing stock is more luxurious than it was a decade ago. "The new product that’s been added to the market is larger, the mix of larger units is higher, and you have more full-service, doorman-type properties," Miller said.

Easy credit and speculation also helped fuel rising prices in the last decade, he said, even in the face of 9/11 and two recessions.

"Clearly, we did have a housing bubble, and that was part of it, and we also had significant economic expansion during this period," Miller said. "A big part of it, really, was a function of credit." …CONTINUED

In addition, New York City itself was transformed during the late 1990s and 2000s as crime rates fell.

"It’s become safer and more cosmopolitan," Wolk said. Manhattan’s enhanced reputation for safety has made it more desirable to foreign buyers, who in turn helped drive up real estate prices.

"We attracted a higher concentration in the aughts of foreign buyers, and I think safety was a huge element of that," Miller said.

Wolk also attributed the run-up in prices to the expansion of Wall Street during the 2000s.

"The growth of the financial markets and the huge amounts of money [it produced] has fed right into our market, no question," he said.

Areas that saw the most price appreciation over the past decade were what Miller called "fringe" neighborhoods like Harlem. For example, the average sales price of a co-op or condo in Upper Manhattan (north of Central Park) in the year 2000 was $170,332, a figure that shot up 204 percent to $519,169 by 2009.

An anomaly in the report was Battery Park City, which saw its prices quadruple as new condos were built with much larger units than had been found in the area in the past, Miller said.

Meanwhile, townhouses saw a slow-but-steady appreciation over the decade, though their prices are also down from 2008.