“People will come, Ray. They’ll come to Iowa for reasons they can’t even fathom. They’ll turn up in your driveway, not knowing for sure why they’re doing it. They’ll arrive at your door as innocent as children, longing for the past.” — Terence Mann, a character in “Field of Dreams”

They climbed out of tour buses and minivans to play catch or to buy souvenirs or just to gawk at the emerald baseball diamond that a movie crew carved out of Iowa farmland more than 20 years ago for the set of “Field of Dreams.”

Ken Sanders said he isn’t quite sure why people come, year after year, to the spot where the famous baseball fantasy film was shot, but knows that the place is beloved by many. That’s why he thinks it has a monetary value that far exceeds its worth as mere farmland: $5.4 million, to be exact.

That’s the asking price for the 193-acre family farm that’s also the home to the Field of Dreams Movie Site near Dyersville, Iowa, which went on the market in May. With the help of a public relations firm spreading the news, it created a minor media sensation and caused Sanders’ phone to ring and ring and ring, he said.

“(Celebrity gossip site) TMZ calls me 25 times a day,” said Sanders, a former Major League pitcher who is in the unusual role of long-distance real estate “consultant” for the farm’s owners, Don and Becky Lansing.

Within two weeks of the Lansings’ official decision to sell, the story had been picked up by more than 500 media outlets, Sanders said.

“There has been potential interest from buyers from around the world,” he said, declining to be specific. “Let’s just say there have been numerous potential buyers — companies and individuals, the majority of whom want to keep it the way it is.”

And that would be largely as it was when Universal Studios encamped there to film the movie, based on W.P. Kinsella’s novel, “Shoeless Joe.” Next to the baseball diamond stand the magical cornfields from which the ghosts of legendary long-ago baseball players Joe Jackson, “Moonlight” Graham and others emerge to play ball in the 1989 film.

In the plotline, a farmer portrayed by actor Kevin Costner hears a voice telling him, “If you build it, he will come,” which evolved into a pop-culture catchphrase.

Tourists started showing up to see the place almost as soon as the film came out. Though the Lansings don’t charge admission, they do maintain a stand that sells an extensive array of licensed “Field of Dreams” goodies, from baseball jerseys to shot glasses.

Sanders, 68, is a real estate broker in Wisconsin who got to know the Lansings in the mid-1990s when he organized “Field of Dreams” fantasy baseball camps featuring such stars as George Brett, Jim “Catfish” Hunter, Buck O’Neil and others.

“It was fun because the teams came out of the corn and played on the field every day,” he said.

Sanders maintained his friendship with the farm’s owners, and when they decided they were ready to sell and retire, they thought of him, he said.

“They felt with my Major League background, we might find a purchaser through baseball,” he said.

So far, no, but Sanders said he’s heard interesting ideas for the location, 24 miles west of Dubuque.

One caller discussed turning the location into a Little League complex that would host tournaments. Another idea has been to build an additional ballpark on the land to host a minor-league team, he said. (Separately, People for the Ethical Treatment of Animals has proposed using the location for a temporary display, “Field of Nightmares,” to highlight its views of how pigs are treated by Iowa pork producers.)

Sanders said the Lansings have placed no restrictions on a buyer’s use of the property. “It’s pristine, in the same condition it was in the movie, and that’s a compliment to the owners,” he said. The $5.4 million price includes seven buildings, including the white Victorian house featured in the movie.

“The land doesn’t substantiate the asking price, but the movie site does,” Sanders said. (According to the Dubuque Telegraph Herald, farmland in the area has sold recently for anywhere from $7,756 per acre to as much as $34,643 per acre for an improved property.)

“I keep telling the sellers this is not a three-bedroom, bath-and-a-half house,” Sanders said. “There’s income and there’s land that’s rented for farming.”

He declined to venture an opinion on how long it will take to find a buyer, though his instincts tell him that for a unique, high-profile property such as this one, “your first offer may be your best offer, just like it would be in residential,” he said.

Although he has maintained his broker’s license, Sanders is easing away from real estate. Eleven years ago, he sold the metropolitan Milwaukee Coldwell Banker franchise he co-owned, though he stayed on with the firm for five years, and then worked for five years more with a GMAC Real Estate affiliate in the area.

“In those days, we didn’t make as much money as they’re making today,” he said. “I had a young family, and when my career ended, I had to do other things.”

So, after he played his last game, for the Royals in 1976, he returned to Milwaukee and obtained his license. He began with an independent, Stefaniak Realty, which eventually became a Coldwell Banker franchise.

Sanders was co-owner and director of relocation for the firm. The latter role was a good fit because he seemed to have spent his early adulthood constantly on the move, he said.

“I played for eight teams,” he said. “In my real estate career, one thing that was important to our company was relocation. I think at one time our company did the largest relocation volume in Wisconsin.”

His baseball experience helped in real estate, he said.

“I think it definitely did,” Sanders said. “No. 1, it’s the competitiveness of it. That gave me initiative, and I think it helped in recruiting (agents) because I think I have a good name in Wisconsin. I was the Brewers’ MVP in 1971.

“The other thing is, when people thought their house was worth a lot of money, they thought I would know the athletes in the area who could buy the home,” he said.

Sanders still has his fingers in baseball. “I run the (Boston) Red Sox fantasy camp, which will be the first week of February in Ft. Myers, Fla., and I do a lot of things for the Brewers: personal appearances and speaking engagements.”

Sanders, who isn’t licensed in Iowa, described his role with the Lansings as a consultant. He doesn’t have a listing on the property — he’s merely advising the owners on the marketing, he said.

“I have an agreement with them, and I checked it with my attorney and their attorney,” he said.

“This is my final project” in real estate, he said. “I thought this would be a good way to wind down my career.” 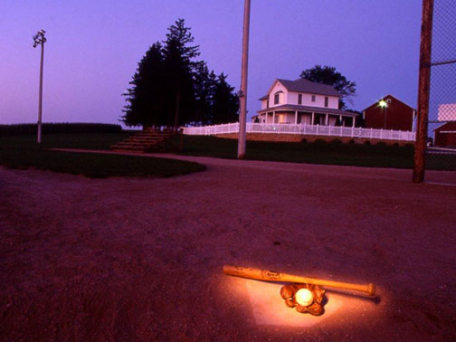