Reports by financial institutions of incidents of suspected mortgage fraud climbed 13 percent during the six months ending March 31 compared to the same period a year ago, the FBI said in releasing its annual report on mortgage fraud.

Some of the rise in suspicious activity reports (SARs) filed with the U.S. Treasury Department

Reports by financial institutions of incidents of suspected mortgage fraud climbed 13 percent during the six months ending March 31 compared to the same period a year ago, the FBI said in releasing its annual report on mortgage fraud.

Some of the rise in suspicious activity reports (SARs) filed with the U.S. Treasury Department’s Financial Crimes Enforcement Network (FinCEN) is connected to loans that were originated years ago.

In releasing its first analysis of foreclosure-rescue schemes today, FinCEN said those types of scams are evolving from operations that attempt to convince troubled borrowers to sign quitclaim deeds, to scams that collect advance fees from homeowners who are promised help in obtaining loan modifications.

According to FinCEN, the top 10 metro areas for mortgage fraud, based on the concentration of suspicious activity reports between Jan. 1, 2008 and June 10, 2010, were: 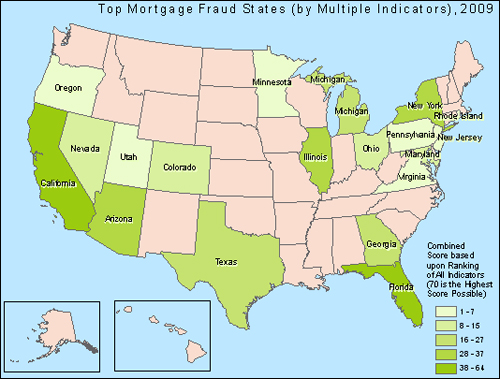 The FBI expects the most common schemes to exploit the homebuyer tax credit program will employ the use of people under 18 or nonresident aliens to claim the tax credit.

Other schemes used to exploit the homebuyer credit program include applicants with income that exceeds program requirements, individuals who have owned a home more than five years, and individuals applying for the program before finalizing the purchase of a home, the FBI said.

In "property flopping" or short-sale property-flipping schemes, perpetrators use distressed properties of homeowners who are unemployed or facing foreclosure. They negotiate a short sale with the bank or lender, purchase the property at a reduced price, and flip it to a preselected buyer at a much higher price.

Perpetrators collude with appraisers or real estate agents to undervalue the property using an appraisal or a broker price opinion to further manipulate the price down — the flop — to increase their profit margin when they flip the property, the FBI said.

The FBI said regulators and law enforcement officials continue to oppose a waiver of the FHA 90-day property flip rule in effect through Jan. 31, 2011. The waiver "contributes to an ever-increasing pool of potentially fraudulent property flipping schemes as it does not require the seller to have title to the property for a minimum of 90 days," the FBI said.