Ross Richardson is a treasure hunter who stumbled upon — rather, floated over — the find of a lifetime.

A real estate agent in Traverse City, Mich., Richardson has for years spent his free time combing Lake Michigan for shipwrecks that went down in the 19th and early 20th centuries. Working with other diving enthusiasts, he’s amassed a respectable track record of finds.

In July, he hit the Big One.

Slowly crisscrossing the waters with his sonar equipment near the Sleeping Bear Dunes National Lakeshore in Empire, Mich., on July 7, Richardson’s equipment showed a large image that made him wonder whether it was the ship he’s been seeking since 2004 — the Westmoreland, which foundered in a winter storm nearly 156 years ago.

"I have a friend who calls the Westmoreland the most romantic shipwreck story on the Great Lakes," said Richardson, who explained that people have been searching for the ship since the 1870s, when stories — which grew ever grander over the years — began to circulate that the ship’s cargo included gold and whiskey.

"That’s part of the allure — people are looking for the gold and the liquor," he said. "It’s quite a romantic story, and I’ve documented the stories of the people who have been searching for it for 130 years."

Though he was hopeful that day, he wasn’t sure what his sonar had found, Richardson said.

"On my first pass over the spot, I saw a target and it was interesting," he said. "I couldn’t see what it was — I just knew there was something down there."

On his next pass-by, he looked at the full image and concluded it was definitely a shipwreck, about 200 feet long. He decided to limit the news to a close circle of family members and shipwreck enthusiasts until he was more certain.

A certified diver, a few days later Richardson made the first of several visits down to the ship’s remains and put together extensive video footage, which he has posted at his website, MichiganMysteries.com.

"My big thing is sharing my passion for this with people," he said. "I put together the website and prepared a press release. That was my way of sharing it."

The video shows the recognizable outlines of the Westmoreland and its distinctive "hogging arches," which are suspensions built over the deck of the ship to help reinforce its wooden hull.

"I’d say it’s in better shape than the Titanic, which is amazing because it was on the bottom 60 years before the Titanic sank," he said. "I didn’t expect it to be in this condition."

Richardson hasn’t tried to enter the boat to explore it, however.

"That’s extremely dangerous," he said. "You can easily get lost inside a ship. You kick up silt and lose visibility, and there’s a danger of collapse and entanglement. I peeked inside some hatches, but that’s as far as I’ve gone."

Nor does he get very specific about the depth and location of the wreckage, which legally belongs to the state of Michigan.

"Let’s just say it’s well beyond recreational depth, which is 130 feet," he said.

He won’t divulge the location coordinates at this point because he fears that souvenir-hunting divers will loot the ship’s fixtures.

"Finding a wreck like this is like finding an underwater museum," Richardson said. "A minority of divers are trophy-hunters and they steal things off the wrecks."

CONTINUED … Eventually, he said, he’ll provide the details, and he hopes his find will promote local tourism by attracting curious divers. He doubts, however, that the ship could be raised because it would deteriorate quickly if exposed to air.

In the meantime, he’s writing a book about the Westmoreland and those who have searched for it; he’s also working with his son on a documentary about the ship.

Several years ago, he moved with his family to the Traverse, Mich., area, where he became a stay-at-home dad, he said. A year ago he became an agent with Century 21 Northland.

Richardson said shipwrecks have captivated him since childhood.

"I used to read books on the Titanic, and I would build model ships and sink them — I was in third or fourth grade," he said, laughing. "I always have had a fascination that I can’t really explain."

His interest waned as he got older, started working and had a family, he said. 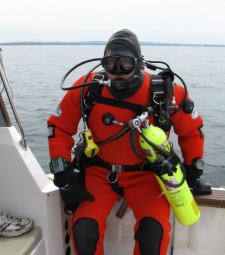 "But the movie ‘Titanic’ came out (in 1997), and it reignited that excitement about shipwrecks, and I found that there were a lot of missing shipwrecks in Lake Michigan," he explained.

He connected with and began to learn from other shipwreck-hunting enthusiasts. About 10 years ago, he learned to dive, he said. He has participated in a number of shipwreck finds, including the S.S. Michigan, a passenger steamer that sank off the shores of the city of Holland in 1885; the Hennepin, a steamer that sank near South Haven in 1927; and the Ann Arbor No. 5, a car ferry that sank (without cars aboard) near South Haven in the early 1970s.

But the Westmoreland stayed at the top of his wish list, he said.

The ship set out from Chicago in December 1854, and almost immediately hit bad weather. It sheltered in Milwaukee for a few days, but once again met with vicious winds, according to newspaper reports at the time.

As one paper reported, in the language of the day:

"The sea, which was very heavy, washed the decks constantly, and becoming fast frozen, so loaded the vessel that she lost life and soon began to wallow very much, grew constantly deeper in the water and became so loaded and strained that she seemed to open at every seam, and the labor of all hands, though unceasing, was found insufficient to keep her free."

Casualty reports at the time were contradictory, but Richardson believes 17 aboard the ship survived and 17 died — 15 of them when their lifeboat flipped over, and two when another lifeboat crashed in the surf.

Some of the survivors later talked about gold aboard the ship, but Richardson is skeptical.

"I don’t think there’s any gold," he said. And if there is, it’s certainly not going to the huge quantity rumored by some treasure seekers’ stories, which have become more wildly exaggerated with each passing year.

But he intends to touch on all of the Westmoreland lore if the public-speaking appearances that he hopes for materialize.

His shipwreck searches haven’t led to any real estate clients, he said, but perhaps the talks will.