But "sexy" is what some people are calling them, and the couple shrug it off. That’s because business, they said, has exploded in the month or so since they started marketing their listings with sometimes-provocative photography of real estate agents and models in the houses — wearing lingerie, lounging on a bed, even in the bathtub.

"That’s how we’ve been portrayed in news articles," said Miriam, who heads Peters & Associates, a six-person brokerage in the Charlotte, N.C., area that specializes in luxury properties. "They’ve spun it as ‘sex sells,’ but that isn’t exactly what our campaign is about.

"It’s supposed to be about lifestyle," she said. "It was misconstrued."

Nonetheless, the Peterses said, the pace of their lives and their business ratcheted up dramatically after they hired a professional photographer about a month ago to shoot them and a few models inside some opulent homes, with the intention of projecting "fantasy" to would-be buyers. Nick said visits to their website have popped, they’ve gained new listings and lately a professional video crew has followed them around, capturing footage for a cable reality series pilot.

The couple were tossing around ideas for how to revive business when they hit on the idea of developing an ultra-glam image for themselves.

Beautiful architectural photography and virtual tours of the homes have become the norm at the high end of their market, they said, so they set out to sell a fantasy version of what it might be like to live in million-dollar homes by putting people in front of the camera, a concept they dubbed "lifestyle real estate."

Some of the photographs are wholesome and family-oriented, or they focus on glamour, they said. Their own son, for example, posed in one setting, playing with a basketball. In a "picture your life here" moment, Miriam wears a wedding gown as she climbs a house’s dramatic staircase. A model in a sundress playfully splashes around, barefoot, in an extravagant fountain.

But other pictures are straight out of Victoria’s Secret. In one scene, Miriam and another model, clad in lingerie, play chess. At a swimming pool, two women in bathing suits absent-mindedly nibble on their sunglasses’ frames as they eye a bare-chested "pool boy" at work.

Elsewhere, Miriam, in a red silk slip, perches on a bed and sorts through an array of stiletto heels. Fast-forward to a model soaking in a bathtub. (She was wearing a bathing suit, the Peterses said.)

Consumers get to glimpse the photography in postcard mailings and in marketing materials the brokerage sends to carefully delineated groups of prospective clients, the couple said.

"We have our data base sorted by clientele," Nick said. The happy-family and "Cinderella-in-an-evening-gown" poses go to clients in upscale, more conservative neighborhoods, he said; the lingerie-and-beefcake stuff goes to residents of the city’s hip Uptown neighborhood or to members of the Carolina Panthers football team.

A four-minute slide show of about 30 photos at the brokerage’s site, YourLeaderInLuxury.com, however, leans heavily toward the latter. Website tracking data indicate that viewers stay glued for the entire four minutes, Nick said.

And response, so far, has been almost entirely positive, he said. The firm has signed up a couple of listings directly in response to the photography, he said. Web traffic is booming.

He said they’ve discussed the photo shoots with all clients. The only disapproving comments they’ve heard, he said, have come from members of the real estate community, mostly in a follow-up story about the lifestyle campaign by a local television station. WBTV quoted one agent’s response to the original story: "To present Realtors in the role of hottie as opposed to educated, knowledgeable, professional Realtors is demeaning, degrading and inexcusable," the agent said.

Nick doesn’t see it that way, he said. Marketers sell everything from candy bars to Cadillacs by feeding consumer "lifestyle" fantasies, and real estate needn’t be any different, he said.

"I understand the (photos) picked by the TV station were the sexier ones," he said, adding that he regretted that the headline on the story on station’s website used the term "sex sells."

"I wish they didn’t write it that way, but it’s true," he said. "Sex does sell. Clients at our level of the game are buying a fantasy — they’re buying these houses to live a lifestyle. We’ve tried to present that luxury lifestyle to the clients in order to get them to look."

And the couple are trying to build on their own "lifestyle." They’re working out a promotional deal with a local luxury-car dealer, for example.

"Our clients are the same as his clients," Nick said. "We’re working on an arrangement (to borrow cars) where we’ll pick up buyers in a Ferrari or a Bentley and tour houses in their dream car."

In recent weeks a video crew tagged along on the photo shoots and with the husband-wife agents as they toured high-end properties with clients.

The crew heard about the Peterses through their photographer, Leif Wombwell, and are hoping to sell the footage as a reality show pilot to a cable network, he said.

"Originally it was going to be like ‘Million Dollar Listing,’ " the Bravo cable reality series about Manhattan agents, he said.

The attention generated by their photography has not come cheaply, he said.

"At a photo shoot, once you add the makeup artist, hair stylist, photographer and models, you’re talking about $3,000," he said, though so far the models have donated their time. The couple is talking to local retailers about lending clothing in exchange for promotional credit, they said.

(The brokerage picks up the tab for the photography, not the homeowners, he said.)

Peters & Associates has done "lifestyle shoots" at half a dozen homes, with the goal of photographing in every one of their 28 listings, he said. They’re doing three to five homes a week (each shoot takes about eight hours, they said) because they’re eager to get it done while the idea is still a novelty, Nick said.

"What’s making it so successful is that we haven’t had competition," he said. "If you had seen it everywhere, it wouldn’t make any impact." 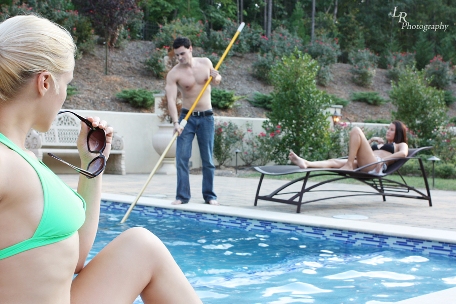