A Texas real estate agent rolled out a review site for cities and neighborhoods today.

The site, YourPlace.com, bills itself as "a fun way to explore and discuss great places to live," or a "Yelp for real estate." Users can see and contribute ratings and reviews for various aspects of a city or neighborhood, such as schools, safety, quality of life, local economy, cost of living, activities, and places to visit, among others.

"We’re essentially trying to solve the problem of people getting candid content about local neighborhoods. What Yelp did for helping people choose a good restaurant, we’re going to do for helping people choose a place to live," said Brian Wilson, founder of YourPlace.com. Wilson is an agent at Keller Williams Realty – The Woodlands and Magnolia, outside of Houston, Texas.

A Texas real estate agent rolled out a review site for cities and neighborhoods today.

The site, YourPlace.com, bills itself as "a fun way to explore and discuss great places to live," or a "Yelp for real estate." Users can see and contribute ratings and reviews for various aspects of a city or neighborhood, such as schools, safety, quality of life, local economy, cost of living, activities, and places to visit, among others.

"We’re essentially trying to solve the problem of people getting candid content about local neighborhoods. What Yelp did for helping people choose a good restaurant, we’re going to do for helping people choose a place to live," said Brian Wilson, founder of YourPlace.com. Wilson is an agent at Keller Williams Realty – The Woodlands and Magnolia, outside of Houston, Texas.

YourPlace currently has more than 23,500 places in its database, but has launched in only three cities as a starting point: The Woodlands; Colorado Springs, Colo.; and, Fort Lauderdale, Fla. The other places in the database are "locked" for the moment and users are encouraged to vote to have their own favorite places unlocked in future launches.

Places that get the most votes, or have some local people who express interest in contributing heavily to the site, will be unlocked sooner rather than later, Wilson said.

"We’re going to focus on these three geographic areas and build a critical mass. We really want (real estate) agent participation because this is a real estate site and real estate agents — they know their neighborhoods, " Wilson said.

Users can type in a place on the home page to see local reviews and ratings. If they’d like to contribute, they complete a registration process and then proceed to type in a review. If they’re stumped about topics, the site makes suggestions, then asks how they know the place, and gives them the option of adding photos and/or YouTube video to their post. Users can also add links to their profile for their website and social media accounts, like Facebook and Twitter.

In addition to tabs for things like "Schools" and "Neighborhoods," a "How’s the Market?" tab includes statistics on the community, such as median sales price, as well as on the people who live there, such as median household income. Users can also contribute their own views of how the real estate market is doing. A "Map" tab allows users to highlight points of interest, such as local parks, and to submit reviews.

In addition, a "City Talk" forum hosts questions and answers from users. For example, a user can ask which is the best elementary school in their area and another user can answer the question in favor of a certain school, but can also add helpful tidbits like "If your kid’s in third grade, ask for Mrs. Johnson" — the kind of personal, nitty-gritty information that often surfaces on Yelp.

"When you move somewhere there are a lot of sites where you can find homes for sale. What’s hard to find is what area you should be looking for, what the neighborhoods (are like). Say you’re having your first child. You want to know (the) kinds of neighborhoods where kids play outside," Wilson said.

You don’t want to move in and find out a home is "really not a good fit for us — the traffic’s too loud and the neighbors don’t like kids running through their grass," he added.

At least two other sites, StreetAdvisor and NabeWise, have come up with similar concepts. StreetAdvisor launched in 2007 and offers community reviews and ratings nationwide. NabeWise allows users to search for neighborhoods in selected cities by lifestyle and also offers local reviews and neighborhood rankings as well as school statistics.

While serving as a U.S. Army reservist in Baghdad in 2007, Wilson started a referral network for real estate professionals called Zolve. (He had left behind a real estate business in Colorado Springs before he was called up for duty.)

The network launched on the heels of ActiveRain’s debut and experienced a short burst of activity. Although not as well-known as ActiveRain, Zolve has grown to 8,000 members since then. Wilson hopes to leverage Zolve’s membership in the starting cities to attract contributions and reviews to YourPlace.

"The worry of any content site is you don’t get the people (to contribute). I’m really worried about just not getting the word out to the regular real estate agents (that) you don’t have to build a blog, you don’t have to build out the whole thing in order to be successful. Just come in and write about what you know, the parks you go to, the schools you know about," Wilson said.

Agents are likely to get business from showing off their expertise, and "that’s a compelling reason to spend a little time at YourPlace for the real estate agent," he said.

Wilson estimates that each place will need somewhere between five and 10 steady contributors at the beginning and hopes to attract them in three ways. One approach is to offer local brokerages the opportunity to fill out a city page before it’s unlocked in exchange for branding and lead generation to the brokerage’s website or IDX after the page launches.

Wilson plans to allow agents to post for-sale listings eventually — but only after a place has built up other kinds of content. Even then, listings will not be the site’s focal point, he said.

"Listings are just another piece of content around that community," he said.

Another approach is to reach out to the "social media leaders" in the three launch cities — the local people the most visibility on Twitter, Facebook, community portals, and local-themed blogs. A third approach is to seek coverage in local news outlets and compliment that with pay-per-click search-engine marketing for people searching for real estate information locally, Wilson said.

YourPlace rewards the most active users with a points and ranking system similar to that used on the social networking and gaming site Foursquare.

Users who post the most content and receive the most positive reviews of that content from other users can earn titles such as "Mayor" for the top contributor to a place and "Founder" for the first person to make a contribution to a city or create a neighborhood. Wilson also hopes to attract a volunteer "Town Marshall" to moderate posts and assist new visitors in each city and neighborhood.

In addition, other users can click a button similar to a "Like" button on Facebook called "Give Compliment," which generates an e-mail notification and has the added benefit of pulling users back to the site, Wilson said. "Compliments" are also a factor in deciding who earns a title, he added.

An individual user’s dashboard will show how many compliments he or she has gotten, how many times people have seen his or her posts, and how many clicks each post has gotten — thereby showing agents "what kind of direct response they’re getting for their time," Wilson said.

YourPlace is also developing a real estate mobile application called "Place Explorer" styled somewhat after the gaming platform SCVNGR. The app will make a competitive game out of exploring for-sale homes in a certain place.

"We’re really excited about the mobile application. It helps (homebuyers) be more comprehensive (in their home search) because they get points and titles by doing things that are important, like giving feedback on the homes (they) see," Wilson said.

In addition to giving feedback, buyers would earn badges for "checking in" to homes, adding their own pictures and making comments. Homeowners and agents would also be able to earn badges.

"We take what are the things that a good buyer, seller, and agent should do and quantitate them," Wilson said.

Place Explorer will also connect to YourPlace, so that if a user submitted a review on the app, it would also appear on the site.

Agents would pay a monthly fee to participate in the game; buyers and sellers would be able to take part for free. The app will be ready in six months, Wilson said.

Wilson said he has been working with a team of Russian programmers and a 19-year-old German designer over Skype for the past nine months to develop YourPlace.

The site is currently self-funded — Wilson signed up for another tour of duty in Afghanistan to fund it and borrowed from family and friends.

He eventually hopes to attract subscribers looking for detailed, local data to the site, such as local chambers of commerce. He is supplementing revenues with inexpensive local advertising on the pages for each of the launch cities, but is looking for national companies that would like to advertise throughout the site.

Although Wilson said the site is "really not focused on generating revenue right now," he does hope to attract investors, especially those in the real estate industry.

To that end, YourPlace will be competing in a venture capital forum in Houston on Dec. 9, Wilson said. The company will pitch its business to an audience of venture capitalists, successful entrepreneurs, and early-stage investors, among others.

YourPlace has also been selected to participate in The Founder Institute, which helps new tech startups launch and get funding and provides entrepreneurial training for company founders, Wilson added. 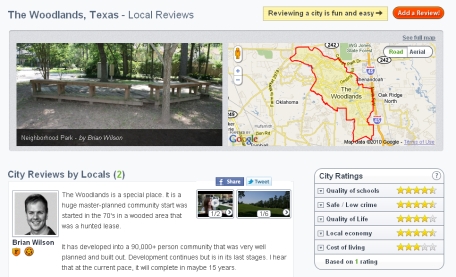