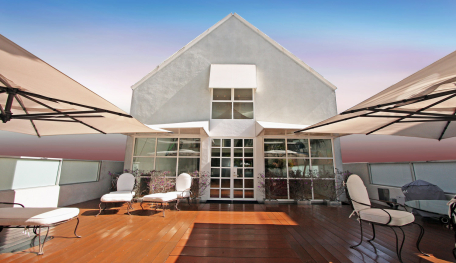 Suppose you bought a home in Vienna, Austria, that once was owned by Wolfgang Amadeus Mozart. One day, you opened up a wall and discovered a heretofore unknown musical composition by the master. That’s how Steve Meadows likened the experience of finding a tape recording made by Eric Clapton on his home’s audio system. Meadows bought the architecturally significant house in Venice Beach, Calif., from the legendary guitarist and singer in 2003 …

Suppose you bought a home in Vienna, Austria, that once was owned by Wolfgang Amadeus Mozart. One day, you opened up a wall and discovered a heretofore unknown musical composition by the master.

That’s how Steve Meadows likened the experience of finding a tape recording made by Eric Clapton on his home’s audio system. Meadows bought the architecturally significant house in Venice Beach, Calif., from the legendary guitarist and singer in 2003.

"People told me he played his guitar here a lot," Meadows said. "You hear him tuning up (on the tape) and he plays guitar for 12 to 14 minutes. It’s distinctive. I had never heard it before and it’s never been recorded, to my knowledge."

Recently, Meadows listed the home for sale for $2.5 million. Bonus for the buyer: The tape stays with the house.

As a further enticement, any amount paid for the house that exceeds the market price will be donated to relief efforts in Japan, explained Meadows, an architect who assisted with recovery efforts in Sri Lanka after the tsunami there in 2004.

Clapton bought the house from the original owner in 1998 and lived there part-time for five years. It’s mentioned in "Clapton: The Autobiography," which the musician published in 2007. He bought it at a time when he was "footloose and fancy-free, beginning really to enjoy life again" after breaking off with his manager, he wrote.

"Situated one block from the mellow end of Venice Beach, it made a perfect bachelor pad," Clapton wrote.

He got that right, according to Meadows. Although it now encompasses 2,850 square feet, it’s essentially a two-bedroom house with a spacious central 1,000-square-foot "gallery" that has six triangular skylights in its 26-foot ceilings, Meadows said.

The original owner was an art collector who hired Arata Isozaki, the celebrated Japanese architect who designed Los Angeles’ Museum of Contemporary Art, to create the house in 1987.

His client, Teresa Bjornson, asked him to design a soaring space where visiting artists could work, and spacious enough to display her collection of works by Louise Nevelson, David Hackney, Andy Warhol and other noted artists.

Clapton wrote in his autobiography that he loved the house, but when girlfriend Melia McEnery moved in, he decided his life "had taken a more domestic turn … I began to question my reasons for living there."

Meadows said he learned that Clapton also apparently was beginning to feel a lack of privacy, even though the property has a gated entry.

"One of the reasons he sold the house was because too many people had found that he stayed there when he came to L.A.," Meadows said. "It wasn’t listed in his name, it was in one of his companies’ names.

"But one of the people I talked to said that Clapton was sitting there one day, playing his guitar, and he looked up and saw a forearm over the wall, holding a video camera," Meadows said. "All he could see was that arm and that camera.

"He kind of felt that too many people knew where he was."

When Meadows bought the house, he said Clapton’s "people" handled the sale, so he spent only a few minutes with Clapton himself. Meadows remodeled the space to add a "mezzanine" and office space, he said.

Besides the sound system that he installed, Clapton left behind some furnishings and a 20-foot indoor palm that stay with the house, Meadows said.

Meadows rents out the home for much of the year, at $475 to$750 per night, depending on the season. He advertises the rental, at PalomaVenice.com, as Clapton’s former home because he recognizes the drawing power of the blues-rocker, he said.

" I had one fellow pop in at 1 or 2 in the morning who had played drums with the Rolling Stones," he said. "He was looking for Eric. His name is Remy Kabaka. We became acquaintances, and he’s come back a couple of times to see me."

The house immediately drew buyer interest when it went on the market April 12, according to Keller Williams Beverly Hills agent Robert Glinert, who has the listing. He said he got five requests for showings on the first day.

"You have to buy in to the cachet of it being Eric Clapton’s former residence," Glinert said. "And there’s the connection to the famous architect."

Meadows said he hopes the Clapton pedigree will bring a premium for the house. He knows that some Clapton aficionados have deep pockets.

In 2004, Clapton donated 100 guitars from his collection, along with amplifiers and a number of guitar straps, to a fundraising auction to benefit the Crossroads Centre, a drug-and-alcohol treatment center he founded on the island of Antigua. The overall auction, at Christie’s, raised $4.5 million, he wrote in his autobiography.

The guitar known as "Brownie," on which he had played what is arguably his best-known song, "Layla," fetched $450,000. A Fender Stratocaster named "Blackie" sold for nearly $1 million.

In advance of a similar auction of Clapton guitars this year (in which four instruments were sold for charity at $2.1 million) , the New York Times reported that social scientists at Yale University had conducted experiments and interviews with guitar players and collectors to analyze the yearning for Clapton relics.

"The contagious powers of Eric Clapton seem to extend not only to the guitars but also to the amplifiers whose knobs he presumably touched," the Times reported.

"I’m hoping that (the Clapton name) will bring a buyer to pay more than the market value for the house so we can donate something to charity," Meadows said.

The Clapton connection was part of his own decision to buy the house, he said.

"I’m a fan of his, but I didn’t know much about him when I bought the house," Meadows said. "But he’s an icon. It was part of the attraction for me and I thought, ‘If I ever want to sell it, it would be an attraction for someone else, too.’ "