A pickup in household formation and access to mortgage credit are critical factors in spurring a lasting recovery in housing, researchers with the Joint Center for Housing Studies of Harvard University concluded in the latest annual "State of the Nation’s Housing" report, released today.

While job growth and consumer confidence remain key to an economic recovery, the "Great Recession" has crimped demand for housing by slowing immigration and the creation of new households by young and middle-aged adults.

Estimates vary, but Harvard researchers say Census data shows household growth averaged about 500,000 per year in 2007–10 — less than half the 1.2 million annual pace averaged in 2000–07. While builders have cut back drastically on home production, a more normal rate of household formation is needed to absorb the current glut of foreclosed and distressed homes, the report said.

An estimated 3.8 million baby boomers will need to downsize in the next decade, creating demand for smaller homes, and "the echo boomers" coming up behind them could represent a fresh supply of first-time homebuyers — if they can find jobs and qualify for loans.

But even as echo boomers — those born in 1986 and later — enter their peak household formation years, household growth has plummeted as young adults delay setting out on their own and immigration slows. 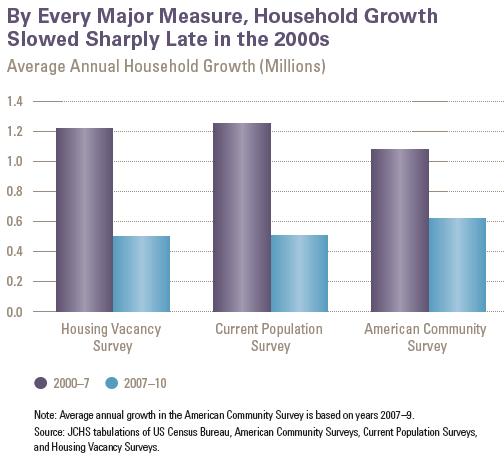 This, at a time when many housing markets are flooded with inventory in the form of distressed properties and bank-owned homes that lenders have foreclosed on.

While Harvard researchers said there is no definitive way to determine how much excess inventory exists, one common approach is to start with "normal" vacancy from the pre-boom years. Comparing these rates against those in 2010, the excess inventory amounts to approximately 700,000 for-sale homes and 160,000 rentals, the report said.

Add to that number an estimated 1.1 million units held off market in preparation for sale or rent in 2010, and about 700,000 excess seasonal homes, and the excess housing inventory could total as much as 2.6 million units, the report said.

Adding to the problem, the report estimated more than 11 million homeowners remain stuck in homes worth less than their mortgages, 2 million are severely delinquent on their payments, and 2.2 million are in the foreclosure process.

Builders have responded to these extreme conditions by keeping housing starts below 1 million a year for the third consecutive year in 2010, with single-family completions dropping to lows last seen in the middle of World War II. New-home sales dropped 14 percent in 2010, to a low of 323,000, marking the fifth consecu­tive year of double-digit declines.

"Working off the inventory overhang appears to be a demand-side problem," based on the minimal impacts that severe cuts in housing production have had on supply so far, according to the report.

But low interest rates and weak prices have made homeownership more affordable than it’s been in decades, the report noted, and several strong months of private-sector job growth in early 2011 are "encouraging signs of a housing market rebound."

One common measure of affordability — the ratio of median house prices to household income — fell to 3.4 last year, the lowest level since 1995 and in line with the two decades ending in the year 2000.

"With inven­tories of new homes at historic lows, a turnaround in demand could quickly result in tighter markets," the report noted. "Over the longer term, the number of younger households is set to rise sharply, sup­porting growth in the population that fuels growth in both new renters and first-time buyers. The path of the economy and evolution of the mortgage market will determine when and if this increased demand materializes."

The government footprint in the mortgage market was larger than ever in 2010, the report noted, with Fannie Mae, Freddie Mac, and the Federal Housing Administration buying or guaranteeing approximate­ly 90 percent of single-family mortgages originated last year.

With Fannie, Freddie and FHA cutting back on higher-risk loans, borrowers with low credit scores have found it increas­ingly difficult to obtain financing.

"The combination of higher income, down payment and credit score requirements in today’s broader mortgage market will pre­vent many borrowers from getting the loans today that they would have qualified for in the 1990s, before the housing boom and bust," the report said.

"While a return to more stringent standards was clearly warranted, there is concern that overly rigid guidelines may unnecessarily restrict access of low- and moderate-income households to the benefits of homeownership."

Regulators implementing the Dodd-Frank Wall Street Reform and Consumer Protection Act have signaled they are inclined to take a conservative approach to defining risky loans, the report noted.

Over the longer term, it is unclear how the impending reform of the housing finance system, includ­ing changes in the role played by Fannie Mae and Freddie Mac, will influence the cost and availability of mortgage loans.

Add demand for homes driven by immigration, the need to replace existing homes, and demand for second homes, and there’s baseline demand for at least 16 million new housing units over the next 10 years, the report’s authors conclude.

"While it is difficult to gauge how close the market is to balance, the longer-term outlook is positive," the report concluded. 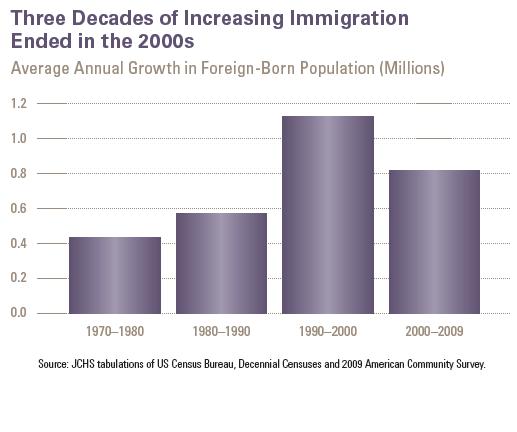 Even under the most conservative immigration assumptions, minorities will account for about 70 percent of the 11.8 million net new households in 2010–20, the report estimated. Because minorities have lower average income and wealth, they have lower homeownership rates. That will put further downward pressure on the national homeownership rate.