Despite a recent report that U.S. home prices "double dipped" in the first quarter, prices bottomed out in March and saw seasonal rises in April and May, according to real estate data company

Despite a recent report that U.S. home prices "double dipped" in the first quarter, prices bottomed out in March and saw seasonal rises in April and May, according to real estate data company Altos Research.

"We’re pretty confident that that means there is going to be a rebound," said Scott Sambucci, the company’s vice president of market analytics, in a recent webcast.

"Even though we’ve busted through that floor in what is called officially a ‘double dip,’ there’s still plenty of movement upside and we’re going to probably move … back into positive ground."

In its most recent monthly report, the company found that median list prices for single-family homes rose between March and May in all but two of the markets tracked in the Altos 20-city composite. Only Las Vegas and New York showed decreases, of less than 2 percent each.

"The prices of new listings have been accelerating pretty rapidly and pretty consistently since the early part of the spring … which would indicate that (closed) transactions, or homes that are leaving the market, are moving higher," Sambucci said.

"This is a very healthy sign for the market that even with higher inventory levels, (the) market is able to tolerate that new supply … and still ask higher prices," Sambucci said.

"Typically, you would assume that in the spring prices go up, because there’s more demand, and inventory moves up because there’s just more sellers on the market, and this is the first time in the last four years we’ve actually seen this trend bear out."

Despite the seasonal price bump, the company does not expect a significant upward trend in prices. Now that the federal homebuyer tax credit program has passed, Altos expects the housing market to return to historical levels of volatility — what it calls a "catfish recovery."

"Catfish spend their time moving slowly at the bottom of lakes and rivers, bobbing up and down from place to place without a clear direction. Expect prices over the long term to hit a bottom, rise a bit, sink back down, rise again — a pattern we expect with the housing market for several years," the company said.

"The ‘double dip’ that is being reported in the headlines is really just the start of the next housing cycle. Volatility is going to continue. There is going to be volatility on a continued and a persistent basis for a long period of time," Sambucci added.

"The only period where we had long-term consistent, constant growth was during the period of time when the housing market was fueled by debt leverage," Sambucci said.

"It’s what we are calling the ‘constant growth myth.’ The notion in our world, from our perspective, that the housing market is going to hit bottom after correcting and then start moving up 3 percent or 5 percent or 7 percent a year going forward — it’s just ignoring history." 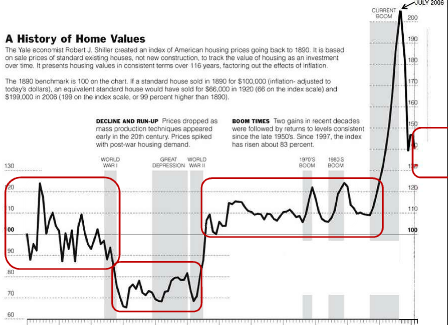