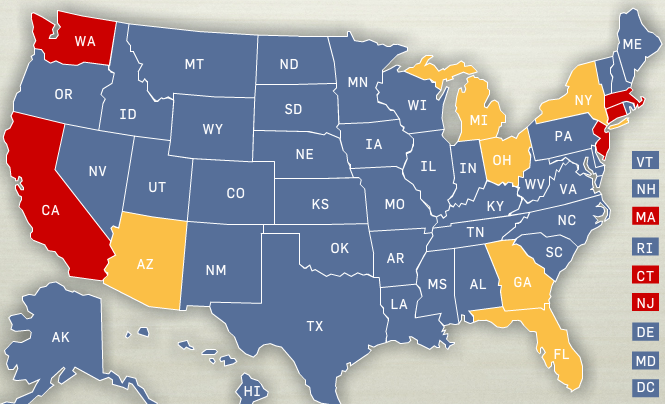 Screenshot of most expensive (in red) and least expensive (in yellow) states according to Coldwell Banker’s Home Listing Report. Click on image for interactive map with local market data.

Six out of the 10 most expensive housing markets in the U.S. are in California, according to an annual report from Coldwell Banker Real Estate released today.

The Home Listing Report examined average listing prices for four-bedroom, two-bathroom homes in more than 2,300 markets in the U.S. and Canada between September 2010 and March 2011. The data includes listings from Coldwell Banker affiliates and other
Realogy franchise brands on coldwellbanker.com. U.S. markets had to have at least 10 properties fitting these criteria to be included; Canada markets had to have at least five.

Among the most expensive U.S. markets, Newport Beach, Calif. topped the list for the second straight year with an average listing price of $2.54 million, nearly $1 million more than the second most expensive market on the list, Pacific Palisades, Calif.,
a district of Los Angeles about 50 miles to the north.

Georgia accounted for three out of the 10 least expensive markets in the U.S. All three (Riverdale, College Park and Lithonia) are within a 20-mile commute to Atlanta, which has an average listing price of $255,448, the report said.

California saw the biggest disparity in prices between its most and least expensive markets: Newport Beach ($2.54 million) in Orange County and Rosamond ($108,263) in Kern County, respectively.

Nebraska had the most parity between its most and least expensive markets: Kearney ($163,300) in Buffalo County and North Platte ($140,440) in Lincoln County, respectively.