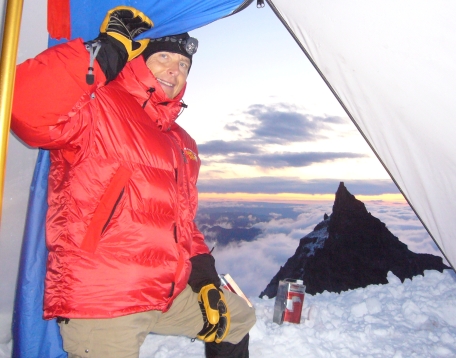 When British climber George Mallory was asked in 1924 why he wanted to scale Mount Everest, he very tersely and very famously replied: "Because it’s there." Rick Davidson is a little more specific about …

When British climber George Mallory was asked in 1924 why he wanted to scale Mount Everest, he very tersely and very famously replied: "Because it’s there."

Rick Davidson is a little more specific about the kick that drives him to strap on a heavy load of supplies and gear and climb 12,000 feet in a day (and back).

"It truly is about taking yourself to a limit and being able to blow past that limit — to me, that is exhilaration," Davidson said.

Davidson, who is president and CEO Century 21 Real Estate, the world’s largest real estate franchise network, next week will join a team of seven other climbers, all of them in the real estate industry, to tackle peaks in Alaska.

The undertaking is a fundraiser for Easter Seals and Big Brothers Big Sisters. The effort will be tracked each day at http://www.facebook.com/Century21.

"We’re hoping to raise $1 a vertical foot, and make as many vertical feet as we can," he said. The plan is to do up-and-back climbs of Mount Eldridge and Explorers Peak, Davidson said. A third peak hasn’t been decided, he said; the choice will depend on the weather conditions and the team’s aptitude.

The latter is a key question mark, he said. He has climbed for several years with three of the climbers — all former colleagues from Coldwell Banker Commercial. The others — all of them associated with Century 21 — have never climbed, he said.

Davidson said he’s confident of the novices’ enthusiasm and determination, and their guide for the climbs will have the final say over their participation. Cooperation is everything, he said.

"When you begin to travel across the glacier, you’re roped into a team — literally clamped together," he said. "That team is your lifeline. You run the risk of crossing a crevasse that can be covered by a snow bridge, and the snow bridge gives out and you have 200 feet of ice cavern below you.

In addition to Davidson, members of the team include:

They’ll converge in Anchorage on Saturday and drive two hours to the town of Talkeetna, which is the departure area for climbs throughout the Alaska Range.

"We’ll catch a ski plane out of Talkeetna, which will fly us up on the Eldridge Glacier, and we’ll set up base camp there," Davidson said. "Over the course of the next eight days we’ll live in the glacier."

After two days of training and conditioning, the climbs will begin. Each ascent will start around midnight because at this time of the year, the midnight light approximates dusk and gives the climbers adequate visibility, he said.

"We’ll reach the summit anywhere from 10 a.m. to two in the afternoon, and descend from there," Davidson said. "(The duration) depends on the technical aspects of the climb and weather conditions, which can change dramatically. So each climb should take from midnight until around 5 o’clock the next afternoon."

Then, the group will go back to the base camp and move closer to the second peak, and repeat the process. A decision on the third peak will follow, he said.

Along the way, Davidson will be tweeting brief updates about the climbs’ progress, which will be posted on the Facebook page. He also will be using a SPOT tracker, a satellite-based device that will send a GPS signal on the climbers’ location beginning July 4 (follow their progress at this link).

Davidson, 51, joined Coldwell Banker Commercial in 2006 after selling his own brokerage, becoming the Realogy Corp. affiliate’s president and later its chief operating officer. In 2010, he was named president of Century 21 Real Estate.

He began climbing 15 years ago, and gradually realized he could use his passion for the sport to raise funds for the Big Brothers Big Sisters organization, where he was a board member in the Washington, D.C. area.

He has scaled most of the peaks in Oregon and Washington, and has climbed in Mexico and Spain, he said. This will be his first climb in Alaska.

The teamwork required in the sport has taught him some business lessons, he said.

"It’s the ultimate individual sport," he said. "You train and go after this mountain, and when you think you can’t take one more step, you have to reach deep-down inside yourself and force yourself to go on. It pushes you beyond whatever self-imposed limits you have.

Yet it’s also the ultimate team sport, he said: "If a fall occurs, you life depends on your teammates."

The deadliest year in the Alaska Range was 1992, when 13 climbers lost their lives, 11 of them on 20,320-foot Mount McKinley (also known as Denali), according to the Bellingham (Wash.) Herald. During the 2011 climbing season, eight climbers have died on the Alaska Range.

Davidson said he hasn’t had any particularly dangerous episodes in climbing.

"Nothing that was life-threatening," he said. "We have had a couple of trips and slips and slides, but nothing beyond what the rope team was able to stop or we couldn’t self-arrest.

"You carry an ice axe and use it to stop yourself from sliding on the glacier," Davidson said. "The rope team is your next resort — as the rope catches, you’re hopeful that your team has dug in and is holding tight," he said.