More than half of economists, real estate experts and investment strategists

More than half of economists, real estate experts and investment strategists polled by MacroMarkets LLC in June said they now expect national home prices to hit a bottom sometime in 2011 and remain stable through 2015.

Panelists are asked to project the path of the Standard & Poor’s/Case-Shiller U.S. National Home Price Index over the coming five years. Robert Shiller is MacroMarkets’ chief economist and co-founder.

"A significant majority of our panelists believe that the bottom for home prices arrived in the first quarter or will arrive sometime before year-end. Despite persistent macroeconomic uncertainty and unprecedented housing market dysfunction, almost two-thirds of the panelists see the U.S. residential real estate market as at an historic turning point," Shiller said in a statement.

The 69 panelists forecasting a 2011 bottom predict less than 2 percent average annual growth in prices through December 2015, he said.

"A 2 percent a year home-price increase will not inspire a lot of consumer confidence. Given prevailing inflation expectations, this forecast implies virtually no change in real home values going forward," Shiller added.

"This is a gut-wrenching time for market stakeholders and policymakers, because each of these scenarios is plausible." 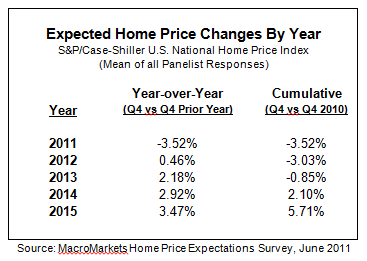 Speakers at last month’s Pacific Coast Builders Conference (PCBC) predicted a housing recovery would remain elusive until 2013 or beyond.