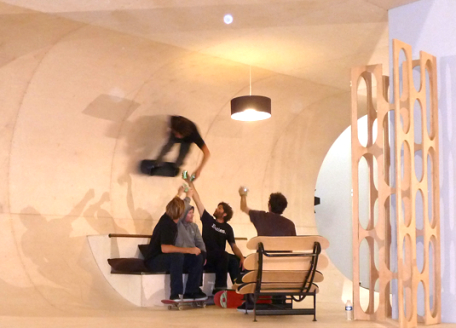 Imagine a skateboarder’s dream home: curved walls for "carving" — skate lingo for leaning and cutting into turns — along with cabinets, tables, and lounge benches that serve as ledges for …

Imagine a skateboarder’s dream home: curved walls for "carving" — skate lingo for leaning and cutting into turns — along with cabinets, tables, and lounge benches that serve as ledges for "grinding," or scraping along on the board’s underside.

Pierre-Andre Senizergues (PAS), 48, founder of Sole Technology and a former pro skater, has developed the PAS House — a prototype for a single-family home to be used for indoor skateboarding while also serving as a traditional dwelling.

"It’s about imagining a city of the future where skateboards are used as the primary form of transportation and recreation — in and out of your home," Senizergues said, adding that the concept behind the house is a ribbon of continuous surface that leads from the home’s exterior to its interior.

Each space of the home is designed to be skateable, as the floor rounds into the wall and ceiling, forming a 10-foot diameter tube. All furniture in the concept home is skateable — the kitchen and bathroom are integrated with the curve, for example, and standing objects including the dining table, kitchen island and bed are designed for skate tricks.

Los Angeles-based architect Francois Perrin said the geometrical design is "groundbreaking," creating a "fluid and dynamic" domestic space. Perrin and skateboarder and designer Gil Lebon Delapointe worked with Senizergues on the development of the PAS house.

A model of the PAS House and a 753.5-square-foot prototype of the living area — which cost $50,000 to construct — was recently presented in Paris for the exhibition "Public Domaine/Skateboard Culture at la Gaite Lyrique," a new museum directed by the city of Paris.

A full-scale, 2,200-square-foot PAS house is planned in Malibu, Calif.

"When La Gaite approached us, we thought bringing a prototype to the museum was a great way to inspire people on what’s possible," Senizergues said, adding that while on display the house has been skated by hundreds of skaters who have "enjoyed skating in such an unexpected environment."

The prototype features built-in cabinets with working appliances and a lounge bench that acts as a couch, both of which offer metal rail ledges for skating. In addition, sofas, a bed, and furniture in the demo home are skateable. The small-scale home has no sharp angles — there are no corners between the ceiling and the floor, for example.

The prototype home was constructed entirely of birch and poplar wood from French forests that was managed according to Forest Stewardship Council standards. The actual piece weight of the prototype is about 3.3 tons, with wood waste of about 150 pounds, according to Senizergues.

There is not yet an exact timeline for the skateable home project planned in Malibu, as Senizergues and Perrin are in the process of obtaining the necessary approvals and permits from the Malibu Coastal Commission — a process that began two years ago.

The house will be constructed using traditional skateboard ramp building methods, and will be divided into three separate spaces: the living room, dining area and kitchen; the bedroom and bathroom; and a skateboard practice area.

The project will make the most of sun exposure and natural ventilation to avoid the use of air conditioning or heating, Perrin said, adding that the rest of the home’s energy will come from solar and wind power.

Rain water will be stored and recycled on site for landscaping, and the concrete slabs will act as thermal mass. Additionally, most of the home’s materials, especially the wood, will come from a local source.

The concept of a skateable house is not entirely new — in 2007, Archivirus Architecture and Design of Greece completed the Ramp House, a home in Athens, Greece, that was retrofitted with a curved ramp-form interior similar to the PAS House. The Ramp House, however, didn’t feature skateable furniture and fixtures.

"A few people have built ramps in their homes, but this is the first 100 percent skateable house from concept, design to build," Senizergues said. 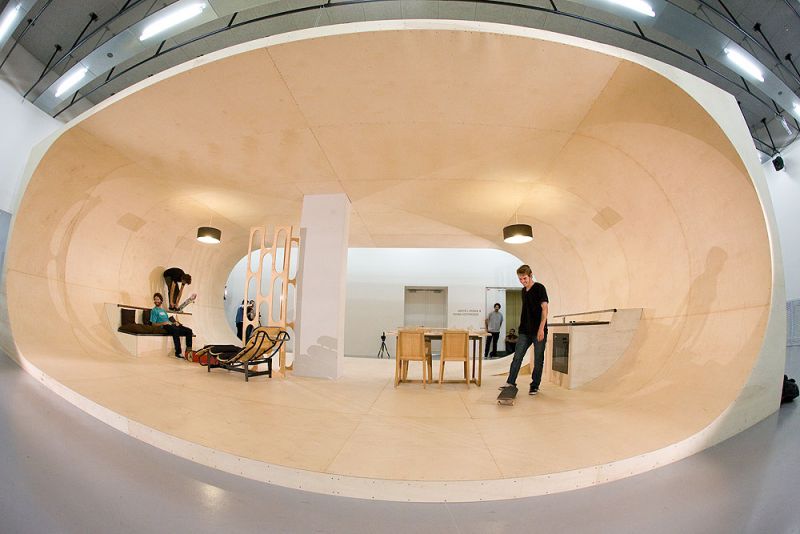 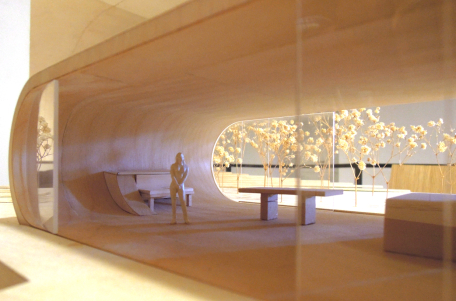 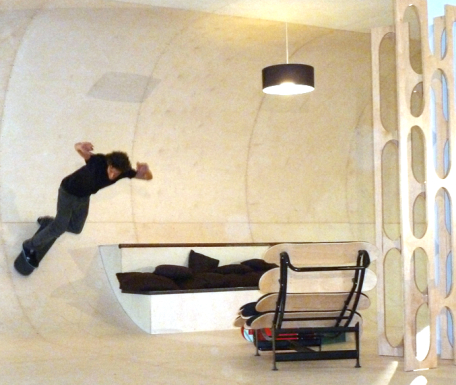 Erik Pisor is a freelance writer in California.