Zillow said it raised $75.7 million in the IPO and private placement of 3.7 million shares priced at $20 each. Investors promptly bid the shares up to more than double that price after trading commenced this morning on the Nasdaq.

By early afternoon, Zillow’s share price had settled down into the $35 range — which would put the company’s market capitalization at about $962 million, if underwriters exercise an over-allotment option to bring shares outstanding to a total of 27.5 million in coming weeks. 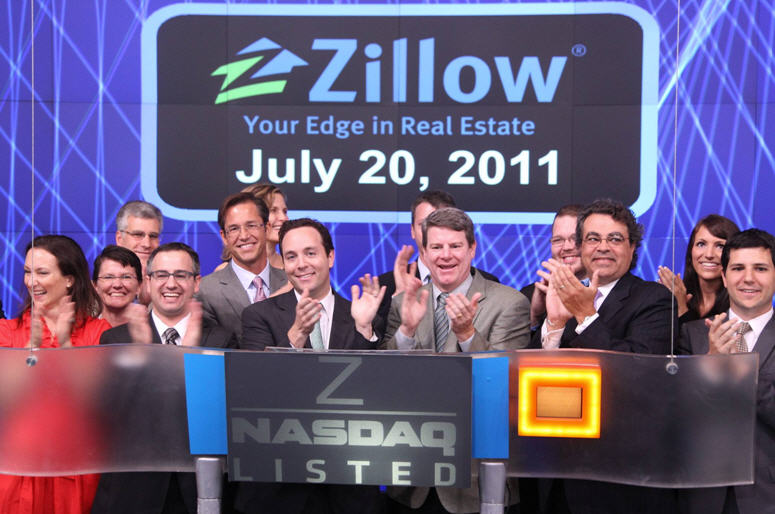 Zillow said it raised $75.7 million in the IPO and private placement of 3.7 million shares priced at $20 each. Investors promptly bid the shares up to more than double that price after trading commenced this morning on the Nasdaq.

By early afternoon, Zillow’s share price had settled down into the $35 range — which would put the company’s market capitalization at about $962 million, if underwriters exercise an over-allotment option to bring shares outstanding to a total of 27.5 million in coming weeks.

That’s an indication of the promise investors see in the company’s future, given that Zillow’s regulatory filings in preparation for the IPO revealed that the company had racked up $79.5 million in cumulative losses since 2004.

The company has said it plans to use the money it raises to boost sales and marketing activities, and may use a portion of the proceeds to acquire or invest in "technologies, solutions or businesses that complement our business."

David Menlow, president of IPOfinancial.com, told Reuters that "all of the offerings in this marketplace are just so frothy that it defies any type of sensible valuation modeling."

HomeAway Inc., which operates a network of websites that match homeowners with travelers looking for vacation rentals and sales, raised $231 million in an IPO this month, and now has a market cap of $3.2 billion.

Another real estate-related company that went public in June, Bankrate, is valued at roughly $1.8 billion today.

"Today’s events were a milestone for Zillow as a company, but just one milestone on a long path — we’ve got a long-term focus," Zillow CEO Spencer Rascoff said in a statement.

"With that focus, what happens with the stock price in the near-term isn’t particularly relevant. We plan to continue delighting the tens of millions of users who come to our website and mobile applications each month, and our thousands of advertisers."

But the optimistic mood of the market could benefit other online real estate companies looking to go public, such as Trulia. Real estate companies that are already publicly traded, such as Realtor.com operator Move Inc. and technology-based brokerage ZipRealty Inc., have seen their share price surge in recent weeks.

Shares in Move shot up more than 12 percent this morning from Tuesday’s close, and were up 42 percent from a 52-week low of $1.80. But with a market cap of less than $400 million, investors still see Move as being worth less than half as much as Zillow — despite the fact that Move generated more than six times as much revenue as Zillow in 2010.

Move, which posted a $15.5 million loss in 2010, trimmed first-quarter losses to $1.6 million and expects to generate $200 million to $205 million in revenue in 2011. A spokeswoman for Move said the company had no comment on Zillow’s IPO.

Shares in ZipRealty are also on the rise in recent weeks, after the company closed offices in some markets to reduce costs and eliminated buyer rebates. But ZipRealty — which generated $118.7 million in revenue in 2010 and posted a $15.5 million loss for the year — has a market cap of less than $70 million.

"It’s exciting to see the enthusiasm for Zillow — it really reflects the terrific growth profile they’ve built, and that profitability seems to be mounting," said ZipRealty CEO Lanny Baker.

Baker said Zillow’s IPO is a significant event because, with a few exceptions, "the real estate industry is so far removed from the capital markets." Although Zillow is not in the brokerage business, it’s tied closely to the residential real estate market, and today’s IPO brings exposure and investor opportunities to the industry.

Capital markets, he said, "do a good job in helping industries sort out and organize themselves."

Although Baker acknowledged that there are drawbacks to being publicly traded — including the time and resources publicly traded companies must devote to regulatory issues — "they are not that troublesome once you’ve mastered them."

Also watching Zillow’s IPO closely today were executives at rival Trulia, which announced in February that it was retooling its management in order to pursue an IPO.

Trulia Chief Operating Officer Paul Levine — who joined the company this year after holding management positions with E-Trade and Yahoo — said the big questions were how capital markets would react not only to a real estate IPO, but to a smaller IPO.

It’s a story that Trulia no doubt intends to tell. Levine said the company doesn’t disclose financials, but has audience size and growth comparable to Zillow’s. For now, he said, the company remains focused on building its management team — it’s actively recruiting a chief financial officer, for example — before moving forward with an IPO.

At the macro level, "the real estate market is obviously in transition," Levine said. But "consumers are hungrier than ever for information, and agents are really hungry for business."

It’s that confluence of consumer and agent interest that Trulia is building on as it continues its "march toward category leadership," he said.

"We think of ourselves as a broader, more comprehensive tool for homebuyers," he said, offering market and neighborhood data, plus user-generated content such as agent advice to provide consumers with information on "property, places, process and pros (real estate professionals)."

Some have speculated that Apollo Management LP, the owner of brokerage company and franchisor Realogy Corp., is preparing to take the company public again. A recent debt restructuring would allow Realogy to shed $2 billion in bond debt by exchanging it for shares of company common stock. A Realogy spokeswoman declined to comment on Zillow’s IPO or speculation that Realogy has similar plans.

Seattle-based technology brokerage Redfin, which like ZipRealty employs a Virtual Office Website (VOW) with deep listing data to attract clients, has also been seen as a company that will go public some day. Redfin CEO Glenn Kelman did not respond to a request for comment.

Timeline: Zillow, from incorporation to IPO