But while the government’s FHA and Veterans Administration (VA) loan guarantee businesses are insuring new, more profitable loans with tighter underwriting standards, private mortgage insurers have lost much of their market share to those programs.

In its quarterly report to investors, PMI Group said that if the company does not raise "significant capital" then it’s "likely" the Arizona Department of Insurance will require PMIC to cease writing new business and could place the company under supervision or initiate receivership proceedings.

"We are exploring capital alternatives that, if successful, could provide capital or capital relief to (PMIC) or capital to other insurance subsidiaries so that they may replace (PMIC) as our primary writer of new insurance."

PMIC is already operating under waivers in 10 states and barred from writing new business in six states, "and we expect that number to significantly increase," the company said.

PMIC subsidiary PMI Mortgage Assurance Co. (PMAC) is currently writing new insurance business in those six states, but "limitations on PMAC could render it unable to write business in the states in which (PMIC) is precluded from writing business," the company said.

Fannie Mae and Freddie Mac have approved the use of PMAC as a limited, direct issuer of mortgage guaranty insurance in certain states in which PMIC is unable to continue to write new business under approvals that expire on Dec. 31, the company said.

PMI said its mortgage insurance division racked up losses of $338.4 million for the quarter and $474.7 million in the first half of the year. It blamed weaker-than-expected job creation and U.S. home prices, higher claim rates, and fewer claim denials.

In addition, lower-than-expected residential mortgage originations and the high demand for mortgage insurance from the FHA have dented the company’s share of new insurance written.

PMI wrote just $6.7 billion in new insurance last year, down 85 percent from $46.1 billion in 2007. In the meantime, "insurance in force" — the dollar amount of insurance issued — remained at about the same level, $102 billion. 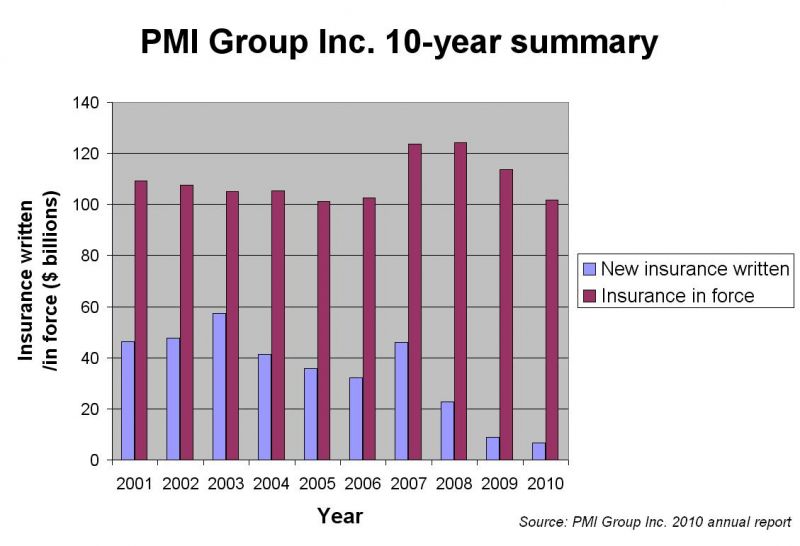 According to an industry trade group, MICA, 24,161 borrowers used private mortgage insurance to buy or refinance a home in June. That compares with 126,608 during the same month five years ago. During that period, insurance in force has declined only slightly, from $625 billion in 2005 to $606 billion now. 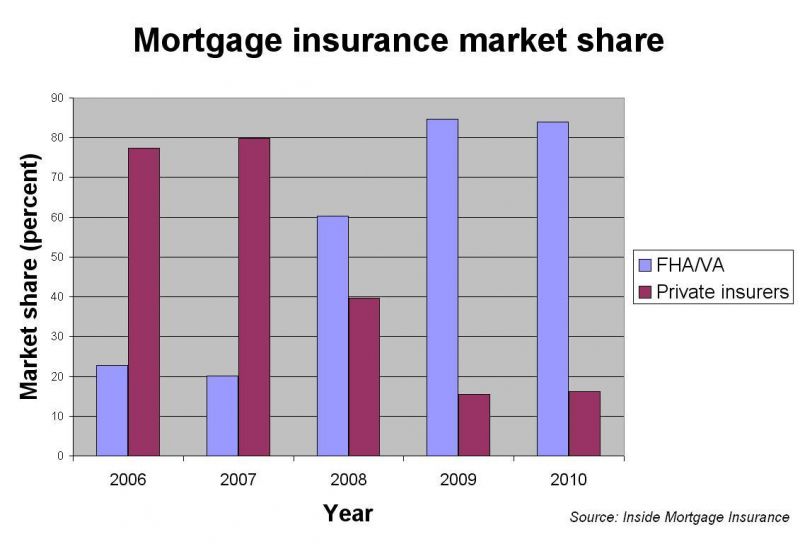 The Obama administration has said it wants to decrease reliance on FHA loan guarantee programs, and in April raised premiums by a quarter percentage point.

"While there can be no assurance of the effect of such increase, this and any future premium increase by FHA could positively affect the demand for private mortgage insurance," PMI said.

Fannie and Freddie’s loan-level pricing adjustments, which went up in April for all mortgages with loan-to-value ratios of more than 70 percent, have also hurt PMI’s ability to compete with FHA, the company said.

Regulatory issues are less of a concern at other companies — Radian Group, the second-largest private mortgage insurer, for example, said profits on derivative investments helped it turn a $137.1 million second-quarter profit, compared with a $475 million loss during the same quarter a year ago.

Radian’s primary mortgage insurance subsidiary, Radian Guaranty Inc., had a risk-to-capital ratio of 19.8-to-1, providing the company some cushion from the 25-to-1 level that raises flags with regulators.

But total mortgage insurance claims paid jumped 40 percent from the first quarter and 52 percent from a year ago, to $512.6 million. Radian said it believes claims paid have peaked "and will generally trend down slowly over time."

The nation’s largest private mortgage insurer, MGIC Investment Corp., said in May that the risk-to-capital ratio of its combined insurance operations was 23 to 1, but could reach 40 to 1 or even higher over the next few years.

Fannie Mae and Freddie Mac have both entered into agreements with MGIC, allowing the company to continue writing new insurance through a subsidiary, MGIC Indemnity Corp. (MIC), if MGIC fails to meet regulatory capital requirements. Fannie Mae’s approval of MIC is good through the end of this year, while Freddie Mac has cleared MIC to write new insurance through 2012.

Title insurer Old Republic International also has a private mortgage insurance division that had losses of $176 million during the second quarter.

Fannie and Freddie have suspended waivers that allowed Republic Mortgage Insurance and its affiliate RMIC of North Carolina to insure mortgages guaranteed by the mortgage giants.

"Absent approval to underwrite new production through the separately capitalized subsidiary, it is most likely that the flagship insurance carrier’s existing book of business would be placed into run-off operating mode," the company said.