Maintain a sense of humor. Most of the following could not be made up.

Maintain a sense of humor. Most of the following could not be made up.

Freddie Mac takes its horse-and-buggy survey early each week and releases it on Thursdays; in a financial world that has operated fully in real time for 20 years, consensus rates available at a keystroke, Freddie reports 3-day-old trash. Clueless.

In real time, rates rose all week long, today at about 4.25 percent, completing a second, perfect two-week cycle: the 10-year Treasury note broke below 2 percent to 1.72 percent Sept. 22, taking mortgages below 4 percent for the best borrowers (only). That lasted two days.

This 2.1 percent is the highest since mid-September, and has technical analysts fearful of an upward breakout. Likely not.

These moves are driven by two things:

One tell-tale: Mortgage spreads to the 10-year are at least 35 basis points (a basis point is one one-hundredth of one percentage point) wider than normal, despite the Federal Reserve’s resumption of mortgage-backed securities buys in "Operation Twist" (which involves the selling off of $400 billion in short-term Treasuries in exchange for longer-term bonds).

Refinancing strategy: Pick a target just above — above — the low that your banker says that you (or he) has just missed. Yes, we should revisit the lows, but they will fly by lickety-split. The idea is to get something done, not just to enjoy the view.

Nothing in the economic picture has changed. Despite widespread forecasts of recession (40 percent chance, according to Goldman Sachs — and it’s guaranteed by the often reliable Economic Cycle Research Institute), we are not in a recession or close to it.

September job data confirm: another stumbling and sorry gain, at half the jobs necessary for real growth — but a gain. The Institute for Supply Management’s September service-sector survey arrived at 53, only a hair off September, and three points into positive ground.

Europe. Merciful heavens. The "Club Med" nations, plus France, are in a free-falling elevator. The plan: Just before impact, all will jump up as high as they can.

The European Financial Stability Facility is just that: The insolvent 60 percent of Europe is offering its own guarantees to a new fund that will borrow new money to bail itself out. Rescued by lifting its own suspenders — that was the phony deal announced July 21 that pulled the plug on global markets for everything, banks in another all-time run on each other.

European plan B: As the elevator car passes each floor, there is a new cry from inside to Angela Merkel standing outside: "Would you please do the proper thing for one Europe and get down in the bottom of the shaft and catch this thing?"

Merkel stirred herself this week to advocate recapitalization of European banks, quickly, with each nation to guarantee its own. France immediately requested access to the stability facility to do so because its bank-hole is too big for it to recapitalize by itself.

Among Europe’s problems, each of the weak has its own fatal illness; France has relatively low (compared to Italy) sovereign debt, pays its taxes, saves money, but has a banking system three or four times its gross domestic product, and with the largest holdings of "Club Med" bonds. "Adieu, cheri, adieu" (French for "goodbye, sweetheart, goodbye").

Everybody knows that if a way to save Spain and Italy cannot be found, the problem would be too big for Germany to fix, even if it were willing. However, right now France is key: Banks are the arteries of post-coinage-and-barter economies.

The first big institution to run for cover, giving up on Euro-self-salvation: the Bank of England. Its governor, Mervin King, was slow to understand in 2008, but not now. In anticipation of an unfortunate conclusion, the Bank of England yesterday announced the doubling of its own form of quantitative easing. When the guy in the elevator next to you puts on his parachute …

Hanging over all is this otherworldly White House. President Obama at last mentioned economic "emergency," but his dead-on-arrival jobs and tax plans, and sudden revelation of hard-left conviction leave the center that put him in office feeling deceived. And speechless — the spectacle is too unnerving for discussion even among friends and at trading desks.

The best visual of all, posted monthly at the Calculated Risk Blog: 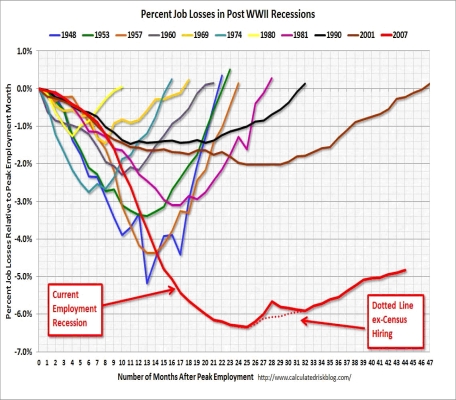 "Involuntary part-time" workers should be the first to be able to find full-time jobs. Not. 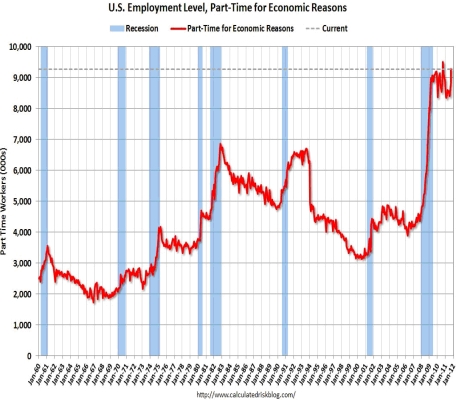 Updated through Oct. 5, this chart does not show completion of the run to 2.1 percent, but it does show a nosedive after the July 21 European Financial Stability Facility announcement, and wobble on low since mid-September. 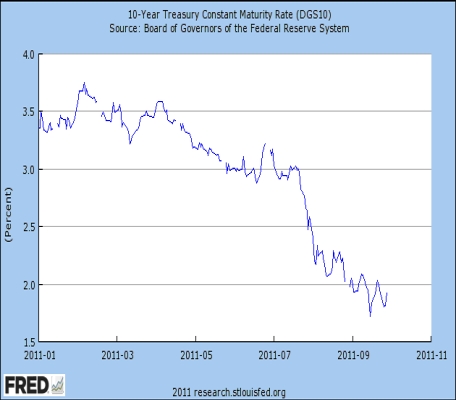