While Wall Street waits to see if Groupon’s much-hyped initial public offering later this week will be a bust or a boon to investors, an entrepreneur named Jaime Tineo is busy working on a different kind of deals site.

Tineo is the founder of KeepSum, a group-buying site for real estate professionals that launched in September. Unlike daily deals sites such as Groupon and LivingSocial that target consumers with discounts for personal services like spa treatments and fitness classes, KeepSum focuses on saving real estate pros money on the products they need to be more productive.

While Wall Street waits to see if Groupon’s much-hyped initial public offering later this week will be a bust or a boon to investors, an entrepreneur named Jaime Tineo is busy working on a different kind of deals site.

Tineo is the founder of KeepSum, a group-buying site for real estate professionals that launched in September. Unlike daily deals sites such as Groupon and LivingSocial that target consumers with discounts for personal services like spa treatments and fitness classes, KeepSum focuses on saving real estate pros money on the products they need to be more productive.

For example, KeepSum customers can buy postcard mailings or online marketing services at a fraction of the cost.

The formula is similar to other group-buying sites. By combining their purchasing power, KeepSum shoppers can leverage economies of scale to get significant savings. Tineo describes it as a simple idea that he came up with a couple of years ago because of his own desire to cut business expenses so he could keep more of his income.

The co-owner of a boutique real estate firm in suburban Westchester County outside New York City, Tineo has spent the last seven years in the real estate industry. He’s no stranger to the tech world though, having worked in information technology at several software companies.

KeepSum is one of the startups that will be featured in Startup Alley at Inman News’ upcoming Real Estate Connect conference in New York City, which runs from Jan. 11-13, 2012. I asked Tineo about breaking into the deals space, and what makes KeepSum different.

Q: Given your background in software and IT, what initially attracted you to the real estate industry?
A: It’s funny how the world works. When I was in college, I interned in commercial real estate at GE Capital, never imagining I would end up doing real estate. It was just a way to get my foot in the door, as they say. But, I ended up taking a tech job out of college instead of staying at GE. After a couple of tech jobs, including working at a startup, I decided to leave the cushy job and get into real estate.

Q: How has your experience in the real estate business helped make you a better startup entrepreneur?
A: The fundamentals are still the same whether you’re in real estate, a startup, or any other business. You have to prospect for business. The "build it and they will come" theory never works. Business is not always going to come to you. You have to go get it. Whether it’s marketing, knocking on doors or picking up the phone, you have to prospect for business.

Q: KeepSum just went live in September, so it’s still in the early days. What are you focusing most of your time on right now?
A: That’s simple: image (and) reputation. Regardless of the sales, I want our audience to know that we’re offering quality products and services at below retail prices. That we’re delivering on our promise to cut business expenses by up to 60 percent. There’s no fluff. It’s not a gimmick. These are the same products and services you’re already using, but for way less. 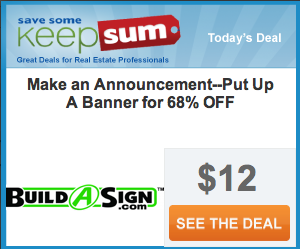 Q: What about competitors? How does KeepSum distinguish itself from other deals companies on the market?
A: Truthfully, we’re the only ones crazy enough to do this for the real estate industry, that I know of. There are a couple of other group-buying sites in real estate, but it appears they have different objectives than KeepSum.

I promise you there weren’t this many (other group-buying sites) when I conjured up KeepSum (in late 2009). I have a mantra I repeat when this topic comes up: "Google was not the first search engine and the iPod was not the first MP3 player."

Q: Why target real estate professionals? Why not market to all small-business owners?
A: I say stick with what you know. I know technology — and not just because I know how to configure my home router and my iPhone to control my television — and I also know real estate.

I know this may sound a bit corny, but (most) every deal site out there is aimed at helping the consumer, and that’s great. But who’s offering deals to the independent contractors?

Q: How do you chose what deals to offer?
A: We’re trying to focus on quality offers — products and services to run your business more cost effectively. We want stay away from the "double your income using this product" offers or from the "get more listings now" deals … we’re not trying to make people spend money unnecessarily.

If you’re already spending money on "A," we want to help you get "A" for much less. It’s that simple.

Q: Right now, you offer a new deal every Tuesday. Do you have plans to offer deals on a more frequent basis than that?
A: I don’t want anyone making impulse purchases. That’s not what we’re about. I say, look around. Come back. Look again. And if you think you can use the deal, then go for it. Yes, the goal is to offer deals more frequently.

Q: Does KeepSum have any plans to expand beyond the U.S.?
A: We’ve had a couple of inquiries from vendors on this. I don’t want to say we’re national or international because some of our vendors, say in Internet Data Exchange, don’t cover (all of the) U.S. or Canada. I rather refer to KeepSum as "not local" … steady growth is what I’m looking for. I don’t discount expanding across the pond in the future.

Q: What advice would you offer to someone who was considering starting their own real estate tech company?
A: Stop starting to plan, to get ready, to go, to get going, and just do it already. Being "ready" is an illusion. You’re never going to be ready.

Want to recommend a real estate tech startup for an upcoming Startup Scene column? Send your ideas to Natalie Fonseca at natalie@inman.com.