China caught the world’s gaze with its "bird’s nest" design for Beijing National Stadium, which took center stage during the Summer Olympics in 2008. And the view has remained riveting as China continues to push architectural design way beyond traditional boundaries.

Clearly, China is going all out to attract more attention — and the accompanying revenue.

China caught the world’s gaze with its "bird’s nest" design for Beijing National Stadium, which took center stage during the Summer Olympics in 2008. And the view has remained riveting as China continues to push architectural design way beyond traditional boundaries.

Clearly, China is going all out to attract more attention — and the accompanying revenue.

Among the architectural wonders built, planned or under construction: a building in the form of a piano and glass violin, a ping pong paddle-shaped hotel, an airplane-shaped airport terminal, and a comic book museum in the form of massive 3-D speech bubbles.

Plans for the Comics and Animation Museum on the drawing board in Hangzhou challenge the principles of architecture and play with design, perspective and proportion. 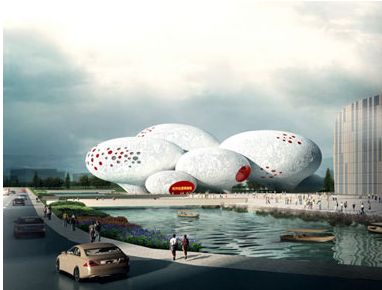 Hangzhou, 111 miles southwest of Shanghai in Zhejiang province, is the site of the International Comic and Animation Festival, so it is a fitting home for the planned museum. The museum complex includes eight interlocking buildings shaped like speech balloons. At night they can even "speak": the design calls for images and text to be projected onto their white exterior facades, communicating with pedestrians below.

Netherlands-based architecture firm MVRDV designed the museum so that visitors can take in the entire floor plan at once. Each balloon building, from the lobby to the roof terrace restaurant, the comic library, and a choice of three cinemas — with a total of 1,111 seats, including an IMAX theater — offers a different interactive experience: blue screen, stop motion, drawing, creating emotions, and a gigantic 3-D zoetrope that produces illusions of action from a rapid succession of static pictures.

The museum will be part of the Comic and Animation Centre, which spans 33 acres and also features a series of hill-shaped buildings, including offices, a hotel and a conference center. The project will consolidate Hangzhou’s position as China’s animation capital. Construction starts in 2012. The local architect is Zhubo Architectural, and Arup is the engineering designer.

Construction is already under way on Shenzhen Bao’an International Airport Terminal 3, which has a design that resembles an aircraft, including fuselage, wings and tail section.

Shenzen airport, in Guangdong province, along the South China Sea, last year ranked as China’s fifth-busiest airport for passenger traffic, handling about 26.7 million passengers, and the airport’s expansion is expected to give it the capacity to handle 45 million passengers per year, according to the engineering design firm’s website.

China is not the only wealthy country to challenge architectural — and social — assumptions.

The ruling royal family of Saudi Arabia oversees what some call the "Las Vegas-ization" of Mecca, with about 400 of Islam’s holy sites transformed in the last 10 years.

Tiny Dubai counts among its many architectural oddities an underwater hotel; Dubailand theme park that is twice the size of Disneyland; Falcon City, with replicates of the Seven Wonders of the World; and a man-made 300-island archipelago.

China, likewise, is fusing imagination with its financial and engineering means. China has the landmass, the labor force and the drive to stretch out such wild architectural experiments. Smaller city governments are taking note of Beijing and Shanghai’s successes, and following suit.

In Anhui province’s Huainan City, a collaboration between architectural design faculty and students of the local Hefey University of Technology and designers of Huainan Fangkai Decoration Project produced an open grand piano-shaped house, as black and shiny as the coal mined in the region, that contrasts with the giant glassy violin resting against its side. The violin structure houses the escalator. 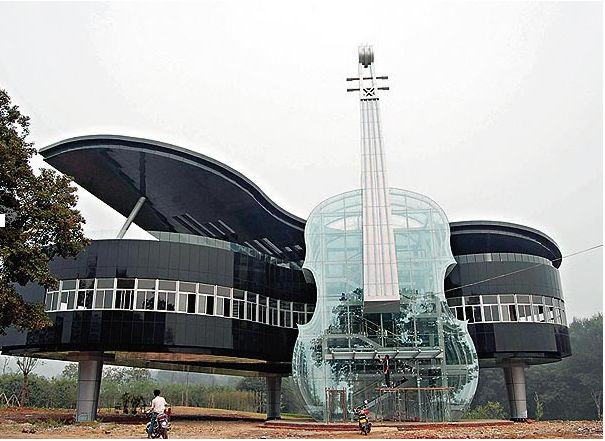 Completed in 2007, the so-called "Piano House" offers music lovers and students from local colleges a performance and practice venue as well as an exhibition hall for local government to highlight the area’s new developments.

That province is planning another grand architectural statement: A massive park and sports complex is on the drawing board. 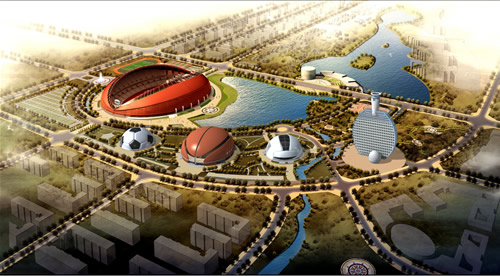 Spread over 165 acres, with a projected cost of $260 million, and scheduled completion date in 2016, the planned complex will present a series of five sports-themed buildings, one of which is a $46 million, 500-foot-high hotel shaped like a giant ping-pong racket.

The ping-pong-paddle hotel building will present views of a stadium shaped like a giant unlaced American football, a volleyball-shaped building housing a swimming pool, a soccer ball-shaped gym stadium, and a basketball-shaped stadium.

According to Jin Chang, director of Huainan’s Municipal Bureau of Sports, this is the "perfect architectural shape for a hotel," which will feature a viewing deck in the racket’s handle. 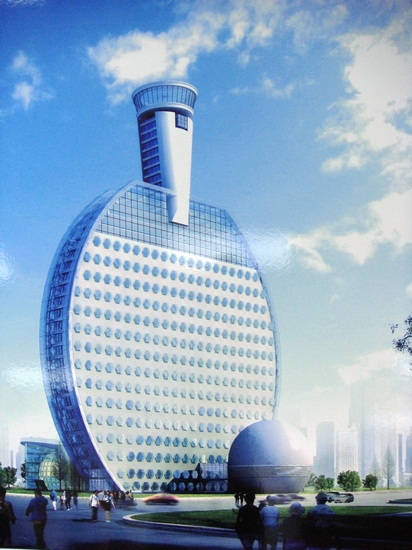 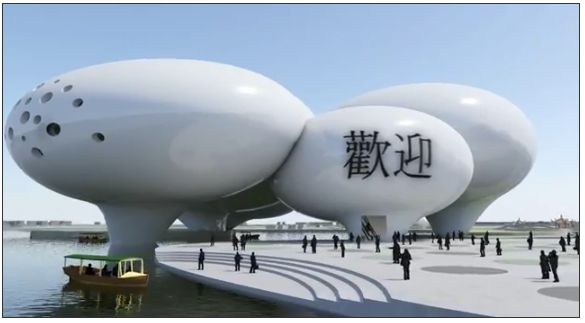 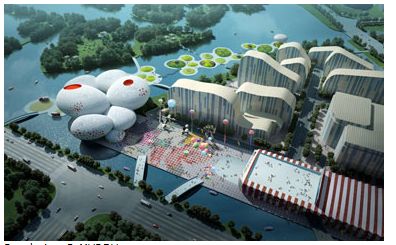 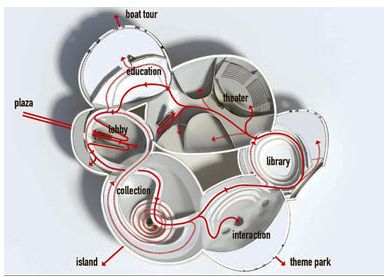 Renderings of the Comics and Animation Museum. MVRDV Architectural 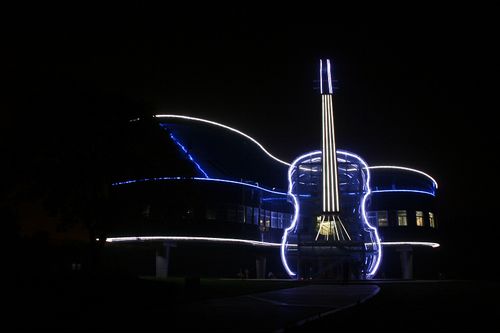 Rendering of Shenzhen Bao’an International’s Terminal 3, which is shaped like an airplane. ARUP Engineering