An evaluation of more than 1,000 homes repossessed by lenders in nine markets found properties in African-American and Latino neighborhoods were not maintained or marketed as diligently as homes in predominantly white neighborhoods.

An evaluation of more than 1,000 homes repossessed by lenders in nine markets found properties in African-American and Latino neighborhoods were not maintained or marketed as diligently as homes in predominantly white neighborhoods.

The "inferior way in which banks maintain and market their REO properties in communities of color actually changes the character of and serves to degrade the quality of life in these neighborhoods," in violation of the Fair Housing Act, the group said in a 49-page report detailing the findings of its investigation.

The National Fair Housing Alliance said the investigation — funded in part by a grant by the U.S. Department of Housing and Urban Development (HUD) — will culminate in the filing of administrative complaints with HUD, and lawsuits in federal district court.

The group filed the first such complaint with HUD against Wells Fargo Tuesday, and said it would be filing a Fair Housing Act complaint against another major bank next week.

"We hope that banks will heed the information in this report and take immediate action to correct the disparate treatment we have found," said Shanna Smith, president and CEO of the National Fair Housing Alliance, in a statement. "The proper maintenance and marketing of REO properties is a key factor in the sale of homes to families rather than to investors."

A Wells Fargo spokesman said in a statement that the lender "conducts all lending-related activities in a fair and consistent manner without regard to race, and this includes maintenance and marketing standards for all foreclosed properties for which we are responsible."

REOs in predominantly minority communities were 42 percent more likely to have more than 15 maintenance problems than properties in white communities, including water damage, deteriorating paint, and damaged siding and gutters.

REO properties in minority communities were 82 percent more likely than those in white communities to have broken or boarded-up windows. In the metro Washington, D.C., market, nearly 60 percent of REO homes in African-American neighborhoods had broken or boarded-up windows, for example, compared with 39 percent of REO properties in predominantly white areas.

REO properties in predominantly white neighborhoods were 33 percent more likely to be marketed with a professional "for sale" sign than their counterparts in African-American or Latino communities. 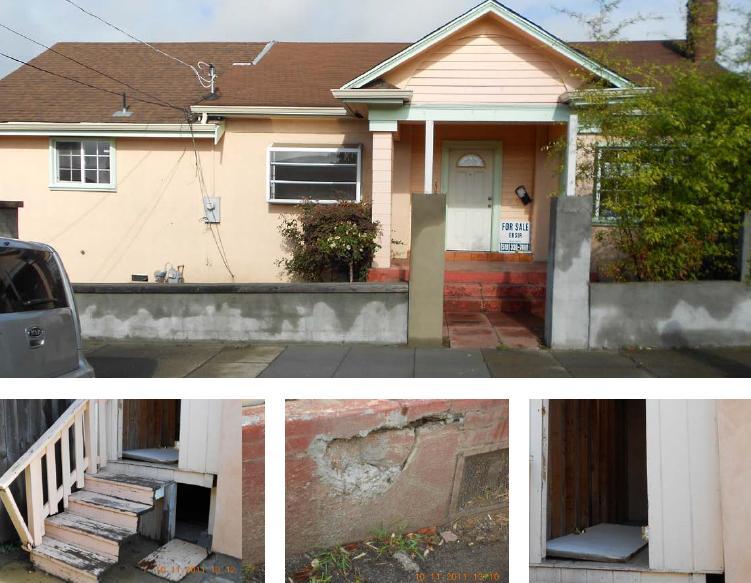 A report by the National Fair Housing Alliance contrasted the condition of this bank-owned home, in a predominantly African-American community in Oakland, Calif., above, with an REO property in a predominantly white neighborhood in the Oakland Hills, below. In addition to damage to steps and gutters, a door was kicked in at the house above, allowing access to the interior of the home.

A "for sale" sign was propped up on the front porch with a phone book. The home below had damage to a fence, but the property featured a more professional "for sale" sign and carefully mowed lawn. Photos: National Fair Housing Alliance. 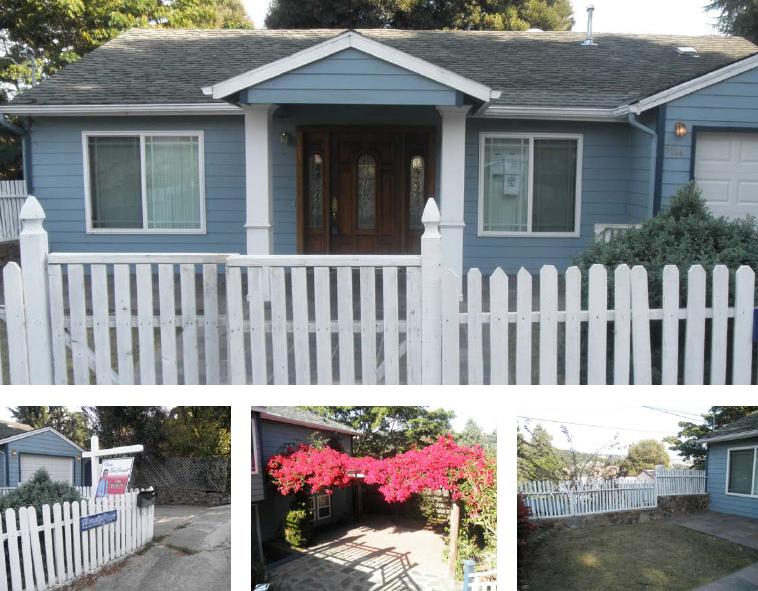 The group said Fannie Mae has also supported its REO investigations and the group’s efforts to educate to the real estate industry on promoting the sale of REO properties in compliance with the Fair Housing Act.

The report noted that the federal Fair Housing Act requires that banks, investors, loan servicers and other responsible parties maintain and market properties that are for sale or rent without regard to the race or national origin of the residents of a neighborhood.

Banks, investors and servicers are required to monitor vendors they hire to perform housing-related transactions to ensure they comply with fair housing laws and regulations.

Steering by real estate agents based on neighborhood racial composition is illegal, and "other behavior in the housing sale or rental market that operates to discourage potential buyers from purchasing or renting homes in neighborhoods of color, such as by failing adequately to maintain properties in minority neighborhoods," also violates the Fair Housing Act, the report said.

"Banks, federal regulators, local communities and law enforcement must work together to ensure that these sorts of discriminatory practices are stopped as the foreclosure crisis continues in the coming years," the report said. "Banks must completely restructure their maintenance and marketing models to ensure equal treatment of REO properties in all neighborhoods so that all communities have a fair opportunity to recover and prosper."

In its Fair Housing Act complaint against Wells Fargo, the National Fair Housing Alliance said its examination of 218 Wells Fargo REO properties in eight markets allegedly revealed "significant racial disparities in maintenance and marketing" in each market, as well as nationally when data for the metro areas was aggregated.

Tom Goyda, vice president of corporate communications for Wells Fargo Home Mortgage, said an in email that the complaint "does not include specific property information that can allow us to investigate the circumstances in any of the markets they list."

Most of the loans serviced by Wells Fargo are actually owned by investors, including Fannie Mae, Freddie Mac and the Federal Housing Administration, which manage the maintenance and sale of repossessed homes, Goyda said.

In cases where Wells Fargo owns the loan on a foreclosed home and ends up repossessing it, the lender has a dedicated department that manages REOs, he said, securing and winterizing properties and conducting maintenance work and monthly inspections.