Francie Rehwald wanted a home with curvilinear, feminine shapes for a 55-acre property in the Malibu, Calif., hills that overlooks a mountain range, a valley, and the Pacific Ocean. In fulfilling her dream, architect David Hertz designed "Wing House" … and recycled a Boeing 747-200 to do so.

That airplane was selected from among the hundreds of retired airplanes that sit in California’s deserts. They are typically sold for the price of aluminum. This purchase — an aircraft measuring more than 230 feet long, 195 feet wide and 63 feet tall, with more than 17,000 cubic feet of cargo area — cost less than $50,000 dollars.

Francie Rehwald wanted a home with curvilinear, feminine shapes for a 55-acre property in the Malibu, Calif., hills that overlooks a mountain range, a valley, and the Pacific Ocean. In fulfilling her dream, architect David Hertz designed "Wing House" … and recycled a Boeing 747-200 to do so.

That airplane was selected from among the hundreds of retired airplanes that sit in California’s deserts. They are typically sold for the price of aluminum. This purchase — an aircraft measuring more than 230 feet long, 195 feet wide and 63 feet tall, with more than 17,000 cubic feet of cargo area — cost less than $50,000 dollars.

All of the structures on Rehwald’s property incorporate components and pieces of that aircraft.

Both main wings and two stabilizers from the tail section — more than 2,500 square feet to scale — make up the roof for the master bedroom. 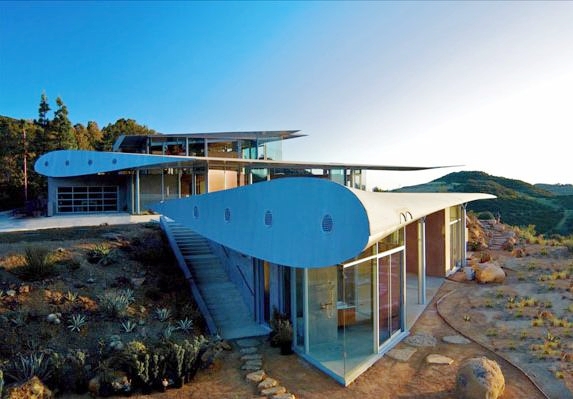 Architect David Hertz explained, "It seemed to make (the most) sense to acquire an entire airplane and to use as many of the components as possible" in designing "Wing House." Photo courtesy of Carson Leh and Laura Doss.

A fire pit and water element are constructed out of the engine cowling. A separate art studio uses a 50-foot-long section of the upper fuselage as a roof. The roof of the guesthouse incorporates the remaining front portion of the fuselage, and upper first-class cabin deck.

The lower half of the fuselage and cargo hold forms an animal barn, while a separate meditation pavilion made from the entire front of the airplane is 28 feet in diameter and 45 feet tall — the cockpit forms a skylight. 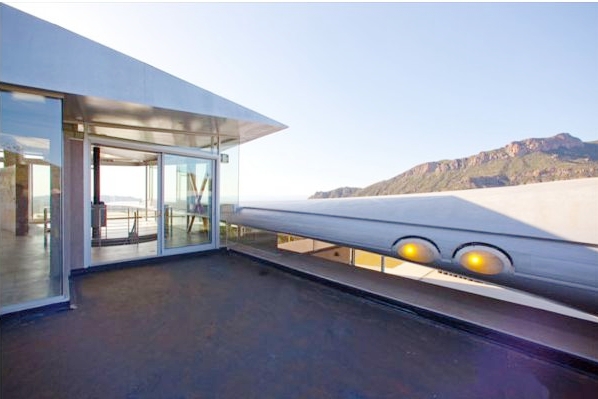 Architect David Hertz noted that  finding a new use for "4.5 million parts (of this) big aluminum can" is seen as an extreme example of sustainable reuse and appropriation. American consumers and industry throw away enough aluminum in a year to rebuild our entire commercial airline fleet every three months." Photo courtesy of Carson Leh and Laura Doss.

The trend in recycling structures not traditionally considered "real estate" is not limited to airplanes — it includes shipping containers, retired railroad cars and locomotives, among other conversions, and spans the gamut from residences to restaurants to luxury hotels.

Tom Bennington, of Max Power Aerospace Inc., worked for airline companies before entering his current line of work, in which he assists airline and leasing companies in taking "live" airplanes out of service. One facet of that business has included building homes out of those retired airplanes.

He purchases aircraft — one or two at a time, as storing multiple aircraft is an added expense — then, on order, breaks them down into their component parts at his workshop in Smyrna, Tenn.

After that, he trucks the parts to the property where his team has preinstalled a pedestal upon which they reconstruct the airplane. One design fastens the craft in a stationary position while another allows the new home to rotate on the pedestal as if, Bennington explains, "it is a whole plane weather vane."

Many of these homes are built outside strictly urban areas, although utilities come from the usual source or can include alternative/sustainable sources.

On average, it takes about six or seven months, from beginning to end, to make an airplane home move-in ready, according to Bennington, a former Eastern Airlines pilot.

Can these airplane homes spook pilots who are up in the air? "Pilots keep their eyes on cockpit instruments and never look at the ground," he said.

The convergence of airline companies scaling back their fleets and the Internet allowing adventuresome travelers to search for one-of-a-kind accommodations turns up interesting venues.

The website Airbnb.com, for example, features unique rental properties around the world — including stays in converted aircraft. Among these are the 727 Fuselage Home in Costa Rica, the 1950s Bristol Freighter Motel in New Zealand, and the Entire Airplane Suite in the Netherlands.

Restaurants flourish in stationary aircraft, too. A small sample includes Airplane Restaurant, a Boeing KC-97 in Colorado Springs, Colo.: (take a virtual tour here); a Boeing 747-121 in South Korea; and Runway 34, a decommissioned Soviet airplane in Zurich, Switzerland, whose renovations include hardwood floors, atmospheric lighting, airline seats, and a main cabin transformed into a cigar lounge, with cocktail tables and servers dressed as flight attendants.

Then there is the half-airplane/half-boat Cosmic Muffin that began life as a Boeing 307 Stratoliner, acquired by Howard Hughes in 1939 as part of his purchase of TWA. It changed hands several times before being extensively restored by current owner Dave Drimmer with Jeff Gibbs. 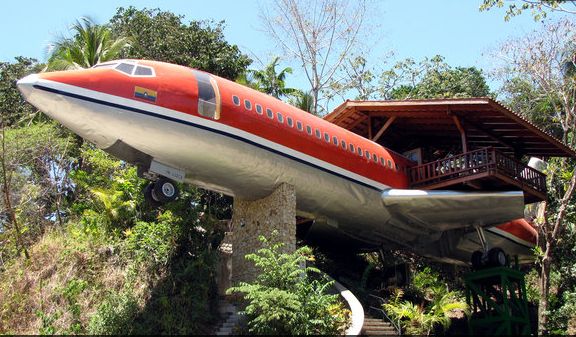 This 1965 Boeing 727 formerly flew in the South Africa Air and Colombian Avianca Airlines fleets. Today, it sits atop a 50-foot pedestal and offers ocean and jungle views of Costa Verde National Park in Costa Rica. For an overnight rate starting at $400, the airplane accommodations house up to six visitors. Among its amenities: a spiral staircase; two air-conditioned bedrooms, each with private bath; a flat screen TV; a kitchenette; and a dining area. Photo courtesy of Vincent Costello and Airbnb.com. 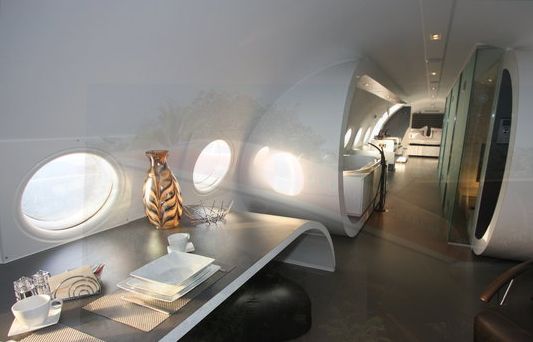 A grounded airplane serves as a luxury suite for two guests, with prices starting at $472 per night. Amenities include: a Jacuzzi, shower, sauna, minibar, three flat-screen televisions, Blu-ray Disc player and a collection of movies, a pantry with a combination oven/microwave, coffee and tea maker, free wireless Internet, air conditioning, bathrobes and slippers. Photo courtesy of HotelSuites.NL and Airbnb.com. 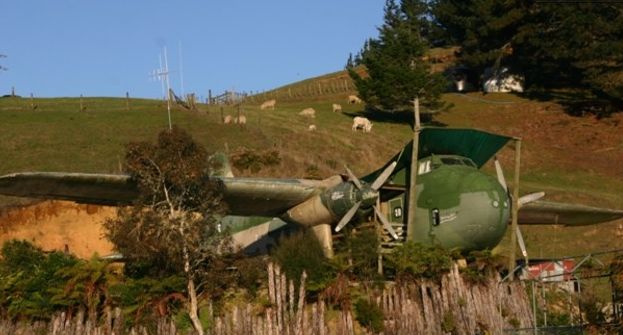 Two separate units, one in the cockpit section and the other in the tail section, accommodate up to four people. This aircraft was one of the last allied planes out of Vietnam. Cost: about $233 per night. Photo courtesy of Airbnb.com. 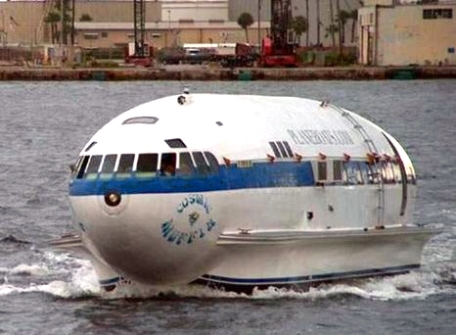