A three-year high in pre-foreclosure sales, typically short sales, helped push the nation’s overall share of distressed sales up to 26 percent in the first quarter, according to a report from foreclosure data firm RealtyTrac released today.

A total of 233,299 properties sold in the first quarter were either in some stage of foreclosure, meaning they were subject to a default notice or scheduled auction, or had completed the foreclosure process and become bank-owned before being sold.

A three-year high in pre-foreclosure sales, typically short sales, helped push the nation’s overall share of distressed sales up to 26 percent in the first quarter, according to a report from foreclosure data firm RealtyTrac released today.

A total of 233,299 properties sold in the first quarter were either in some stage of foreclosure, meaning they were subject to a default notice or scheduled auction, or had completed the foreclosure process and become bank-owned before being sold.

That total is virtually flat from first-quarter 2011, though it comprised a slightly higher share of overall sales — 26 percent — than in the same three-month period last year, when 25 percent of homes sold were distressed. 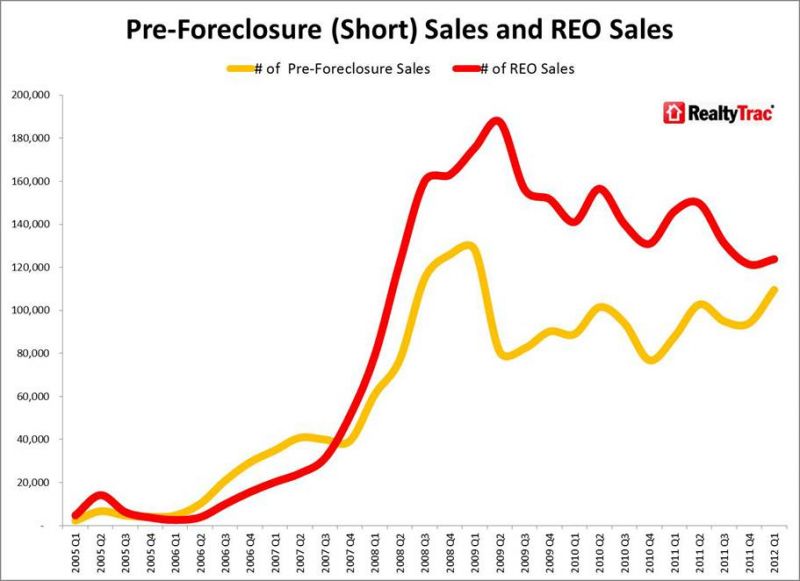 "Foreclosure-related sales picked up in the first quarter, particularly pre-foreclosure sales where a distressed homeowner is selling to avoid foreclosure — typically via short sale," said RealtyTrac CEO Brandon Moore in a statement.

Homes in pre-foreclosure sold for an average $175,461 in the first quarter, down 10 percent on an annual basis and the lowest average since first-quarter 2005, when RealtyTrac first began keeping track. Pre-foreclosure properties sold for an average 21 percent less than a nondistressed home in the first quarter, up from a 16 percent discount at the same time last year.

The average sales price for a bank-owned home last quarter was $147,995, up 2 percent year over year and 33 percent below the average price of a traditional home. That discount has declined from first-quarter 2011, when it was 37 percent.

Foreclosure-related sales overall sold for an average of $161,214 in the first quarter, down 2 percent from a year ago and 27 percent under the average sales price of nondistressed homes during the quarter.

"The average price of a bank-owned home is stabilizing and even increasing in some areas where a slowdown in REO activity over the past year has resulted in a restricted supply of REO homes available," Moore said.

"Still, REO sales did increase on a quarterly basis in 21 states, indicating that lenders are still working through a bottleneck of unsold REO inventory in many areas."

Oregon was among those states with a 41 percent increase in REO sales last quarter, followed by North Carolina (23 percent), Ohio (21 percent), Florida (13 percent) and Wisconsin (13 percent), the report said. REOs sold an average of 178 days after completing the foreclosure process, up from 176 days in the first three months of 2011.

12 states with the highest share of foreclosure-related sales (Q1 2012): 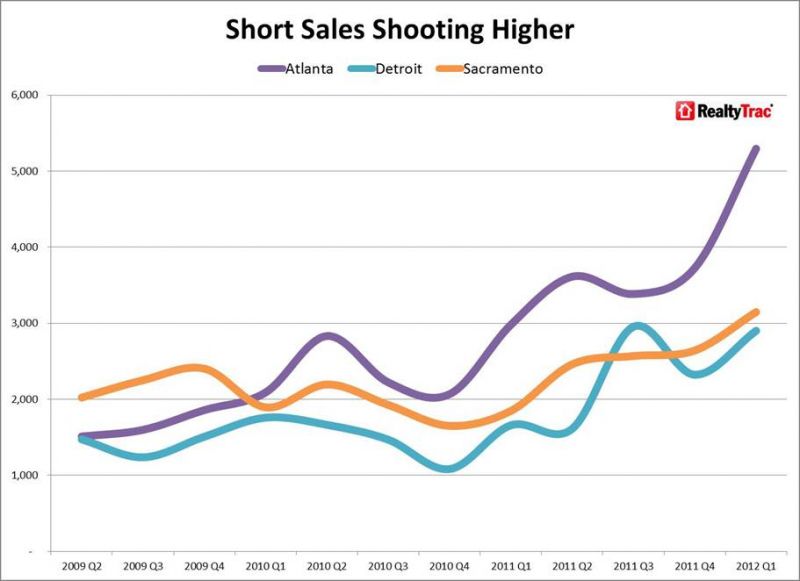 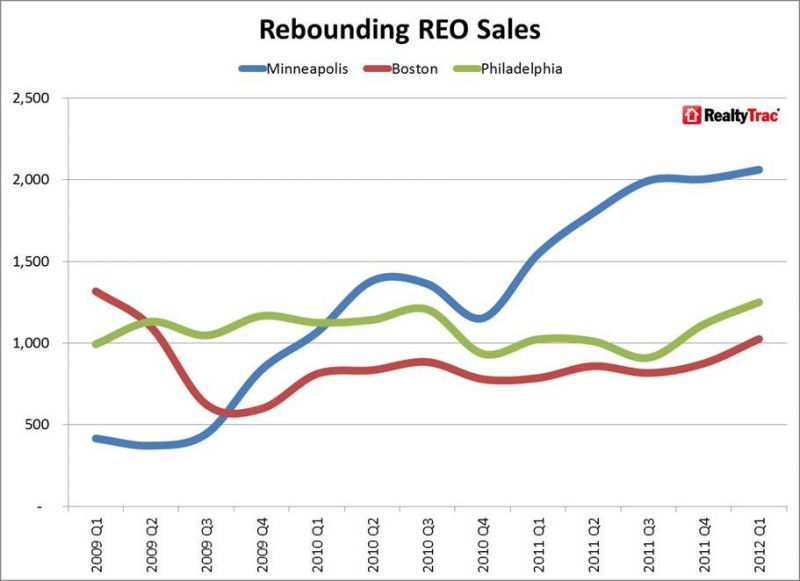 Among metros with at 200,000 inhabitants, the 10 areas with the highest share of distressed sales were all either in California or Nevada.

In a separate report this week, real estate and loan data aggregator CoreLogic found that there were 15 percent fewer foreclosures completed nationwide in April compared to the same month last year — a total of 66,000.

Foreclosure inventory — homes currently undergoing the foreclosure process — stood at about 1.4 million homes in April, or 3.4 percent of all homes with a mortgage (about one-third of homes do not have mortgages). That’s a slight decline from 1.5 million, or 3.5 percent, a year ago. 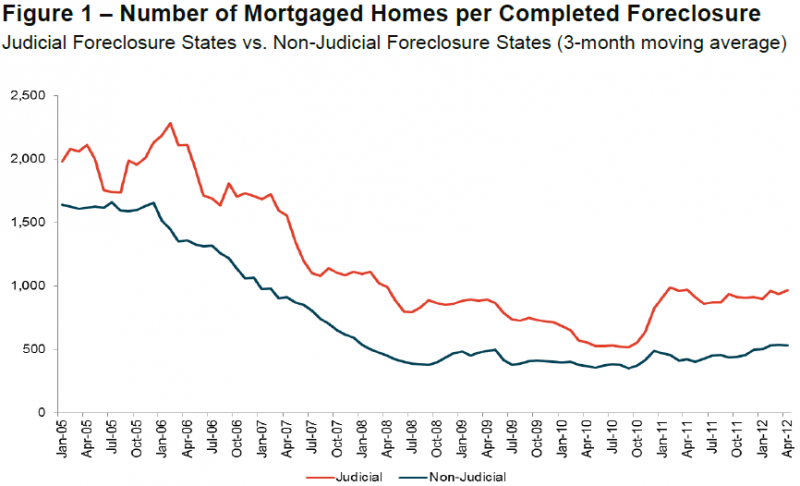 "The inventory of homes in foreclosure in judicial foreclosure states is growing, but this increase is being more than offset by declining inventories in nonjudicial states where the processing timelines to clear a foreclosure are shorter," said Anand Nallathambi, CoreLogic’s CEO, in a statement.