The Fed will conclude a meeting on Wednesday, and we’ll get the July survey from the Institute for Supply Management (ISM) the same day. Thursday the European Central Bank will meet. Friday comes the whale: employment stats for July.

The Fed will conclude a meeting on Wednesday, and we’ll get the July survey from the Institute for Supply Management (ISM) the same day. Thursday the European Central Bank will meet. Friday comes the whale: employment stats for July.

The tilt going in: the first substantial selling of 10-year T-notes in weeks, its yield up from brief visits to 1.39 percent to 1.53 percent today, the high in three weeks. Why traders would unload the safety play just when the party is getting ugly … takes a little telling.

Sentiment turned yesterday on European Central Bank President Mario Draghi’s assurances that "the European Central Bank is ready to do whatever it takes to preserve the euro. Believe me, it will be enough." Draghi went on to announce his plans to date Jennifer Lopez tonight, Kim Bassinger tomorrow, and win the decathlon gold next week.

If a central bank has to promise to preserve something, odds are high that it is already dead. This is the talk of 0-10 football coaches. Imagine if an American Fed chair said he would "preserve the dollar" — not defend its value versus other currencies; not prevent inflation or deflation, but preserve its existence? Elbow the women and children out of the lifeboats.

Wall Street has a line for every occasion. The trick is matching them up properly. One of the oldest and best: "Don’t fight the Fed." Here, now, the match-up is tricky.

New European ISM data has the entire zone down to 46.4 in July. Fifty marks breakeven, 44 the ledge to deep recession. Even Germany is 47.4. Only one place on earth has a solution for the austerity-stimulus conundrum (see optimism below), and it’s not Europe.

Germany cannot bail out the rest of Europe; it can help (only) if Europe embraces austerity, but the resulting depression would break social stability. Moody’s this week said German credit is at risk whether the euro makes it or not.

Growth is decelerating in China so fast that it has chosen to risk trade war. Europe is China’s No. 2 export customer, and those sales are falling partly because the European economy is failing, and partly because the euro has dropped so far. The People’s Bank of China has begun actively depreciating the renminbi, catalyst for an election-year explosion in Congress.

The Fed-European Central Bank calculus goes this way: Fed Chair Ben Bernanke has made it plain that there will be no replay of 1930-32, not on his watch. Never in 135 years of central banking has there been anything like his astounding invention and courage from Lehman in September 2008 until stabilization in January 2009 (which President Obama persists in hijacking as his own work, before he even raised his right hand).

Markets are puzzled that the Fed has not yet acted, and are priced for a big QE3 involving Fed purchases of mortgage-backed securities (MBS). The question is if new intervention will "work," in the sense of producing economic recovery.

Nobody should doubt that Bernanke will try, and in concert with other central banks. He will not participate in a boost of inflation to higher target, nor the kind of debasement much of Europe wants from the European Central Bank. But Bernanke will try all else.

Thus in the short term, even though the Fed will likely buy mortgages, current lows are overdone. And in pure hunch here, fears for the U.S. economy are also overdone. For now. Whatever Bernanke does will raise some hopes and some rates.

One other place and people has displayed Bernanke-quality grit and brains: the U.K.

At the outset in 2008: Devalue the pound; embrace austerity and squeeze out the structural budget deficit by 2015, mostly through spending restraint; the Bank of England to QE as necessary to cushion; tolerate occasional inflation above target; and make certain that banks provide adequate credit. The price: GDP has shrunken the last three quarters, a 3 percent annual pace in the last 90 days. However, tax revenue is up 5.8 percent year over year, and employment up 159,000 in six months (multiply by five for U.S. equivalent).

Right there is an austerity-stimulus victory in plain sight. As you watch the Olympics on the telly, you might ask why you can’t see that policy mix out your window.

The Economic Cycle Research Institute (ECRI) is perhaps the longest-running and most accurate U.S. economic evaluator. They made a reputation-risking call for recession last November, and have renewed it this month, adding "nothing can be done." I think they’re early, and underestimate Bernanke. 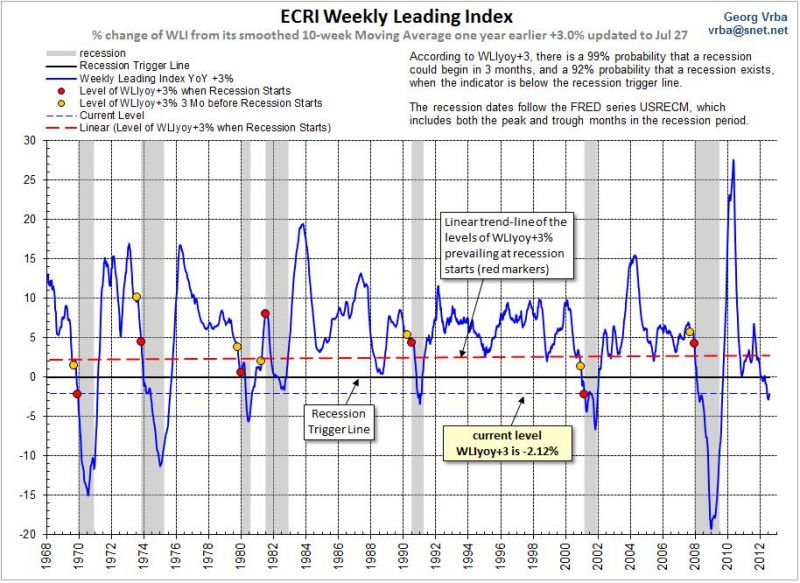