Lockhart Steele’s passion for telling the story of how neighborhoods evolve, from the pavement up, has become the Curbed Network LLC, a fast-growing New York City-based blog network with three brands spanning real estate, dining and fashion in the U.S.’s largest cities, including New York City, Los Angeles and San Francisco.

"We’re chronicling, in a loving way, the cities that we’re living in," said Steele, 38, Curbed’s founder and publisher.

Steele will talk about the devastation wreaked by Hurricane Sandy with fellow New Yorker Brad Inman, the publisher of Inman News and a Curbed investor, on opening day of Real Estate Connect New York City, which runs Jan. 16-18 at the Grand Hyatt New York.

"It’s as if the storm came through yesterday," said Steele of his lower Manhattan neighborhood South Street Seaport, which borders the East River near the Brooklyn Bridge and classified by the city as one of the most vulnerable to flooding. "You wouldn’t believe it."

Just a few blocks from Wall Street, the six-block-by-six-block neighborhood was "eviscerated" by the storm, the New York Times reports. Many residents were temporarily banished, and small businesses, bars and restaurants — including the Bridge Café, the oldest continuously operated bar in the city — have struggled to reopen.

Steele, who started out his career as a writer and editor but doesn’t create much content for Curbed now, blogged soon after Sandy swept through about the state of the neighborhood’s eating and drinking establishments on the Curbed site Eater. 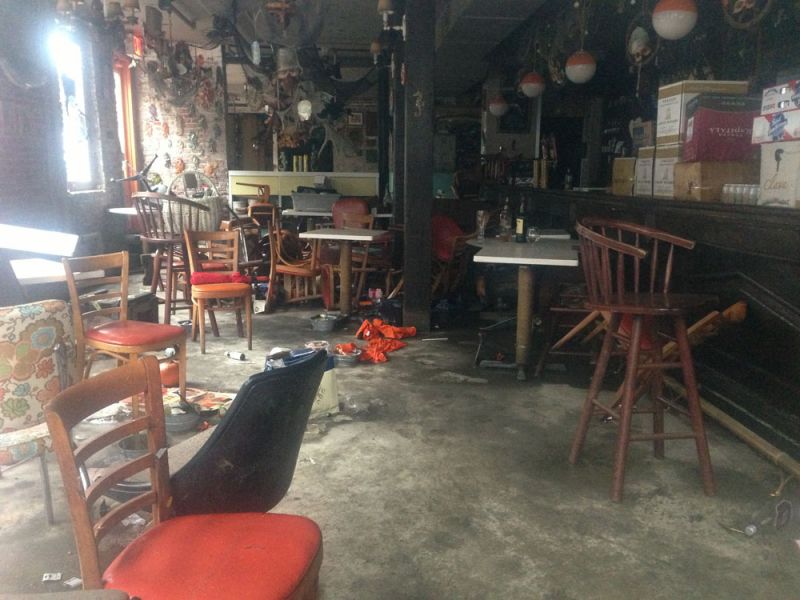 Steele’s posts were in the characteristic Curbed style: well-written, wry and knowing.

Steele moved to the area last year from a Lower East Side two-room walk-up he had for more than a decade to live with his girlfriend. They found the place together in 2011 and have yet to move back since the storm because of the devastation, Steele said.

The up-and-coming Lower East Side inspired the germ of what became Curbed. Watching the neighborhood and the surrounding area evolve — its real estate, bars, restaurants — fascinated him. He started blogging about them in 2001.

In 2004, he organized his blog into Curbed as a part-time hobby, chronicling, in a hip, intelligently snarky (and loving) way, how the ‘hood changed.

In 2007, Curbed had grown, organically, to the point where Steele — a Brown University grad and co-author of a six-volume compendium of the ’90s jam band Phish — felt something had to be done. He had to either shut it down, or go all in. He went all in.

That year, Steele left his two-year stint as managing editor of the New York City-based media company Gawker Media, one of the largest independent media companies in the U.S., to give more attention to Curbed.

Now, it’s grown into 44 national and local sites that put a curb’s-eye view on the country’s largest cities, through three filters: Curbed, which covers real estate and design, has 13 city-based sites; Eater, launched in 2005 to focus on dining and nightlife, is now in 20 cities; and Racked, which explores fashion and shopping, is in six cities.

Like many publishers, Steele — described as a "New York renaissance man for the Internet era" in a 2010 New York Times Magazine profile — is trying to figure out a revenue model that works.

The site’s been profitable since 2009, and display ads that cater to its hip, affluent, early-30-something audience account for the a big chunk of the company’s revenue, Steele has said.

In Curbed’s real estate division, real estate classifieds are a growing source of revenue, Steele said. The site operates its own real estate marketplace on two of its local sites, New York and the Hamptons, while Zillow powers the classifieds sections on the national site and the remaining local ones. They show up around the site’s posts on design, architecture and the hottest listings.

Eater has a job marketplace and a dating service, which engages users with prospective dates via the prompt "How about we …"

Regardless of where revenue comes from, success depends on creating great content, Steele said. The way to create great content is to hire funny, smart writers. In the next year, he said, Curbed is working to develop a way to add its smart sensibility to video, to refine and enhance its recommendations (like the Eater 38), and to incorporate user comments in a better, more interesting way.

Steele said Curbed plans to launch a Ski channel by the end of the year that will cover upscale ski towns like Vail and Aspen in Colorado, and Park City, Utah, among others.

But it’s not all work.

What does an A-list mini media mogul do for fun in New York City? On a recent Friday night, he was meeting up with his girlfriend and her parents at a new brisket joint in Brooklyn. That borough’s starting to get barbecue down, he said.

And it’s not all urban.

In the summers, Steele said, he spends a lot of time on the water in Maine.