Hispanics accounted for more than half of new owner-occupied households last year and have the purchasing power "to push the U.S. housing recovery into high gear," according to an annual report from the National Association of Hispanic Real Estate Professionals (NAHREP) released today.

In its 2012 State of Hispanic Homeownership report, the trade group said Hispanics have posted gains in jobs, income, education, and household formation that make them ready to drive demand in the housing market, but that scarce for-sale inventory and policies that favor investor buyers are holding them back.

"Despite a difficult economic environment and a tight mortgage market, Latinos are making gains in all the ways that make them ready for homeownership," said Juan Martinez, NAHREP’s newly elected president, in a statement. "Their biggest obstacle now coming into the market isn’t the credit crunch, it’s the lack of available housing to purchase. They will play an increasingly significant role in the nation’s home purchase market, if conditions permit."

The most significant barriers to Hispanic homeownership are government and corporate policies targeted to investors, such as REO-to-rental programs, that have removed affordable housing stock from the owner-occupied market, creating an imbalance in supply and demand, NAHREP said.

In 2012, almost half of homes $250,000 or less were purchased by investors, including Wall Street firms, the report said.

"Property disposition strategies that favor investors and Wall Street firms such as auctions, bulk sales, and ‘drop-bid’ trustee sales should be discontinued in markets where there is a strong demand for residential properties," the trade group recommended.

Hispanics made up 355,000, or 51 percent, of the total net increase of 693,000 owner-occupied households in 2012, the report said. Though the housing crisis dealt a significant blow to Hispanics’ level of wealth, the number of Hispanic homeowners grew 58 percent, from 4.24 million to 6.69 million, between 2000 and 2012, compared to a net increase of 5 percent for the remainder of the U.S. population, NAHREP said. 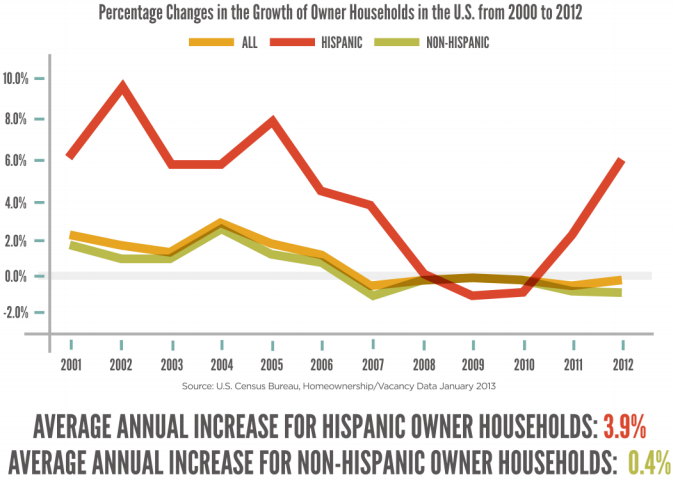 "[A] combination of economic and demographic trends explain why this colossal consumer segment will be a reckoning force behind the revitalization and growth of the nation’s economy for the foreseeable future," NAHREP said.

Hispanics accounted for more than half of U.S. population growth in the past decade and are expected to contribute more than 60 percent of the nation’s population growth over the next five years. The median age of Hispanics is 27, 10 years younger than the U.S. median overall, and 50,000 Hispanics reach the age of 18 every month, the report said.

They are also now the largest minority group enrolled in college, hitting a record 16.5 percent share of college enrollments in 2011.

Hispanics accounted for about half of U.S. job growth in 2012 and four out of 10 Hispanics earn more than $50,000 with such households growing at a faster rate than U.S. households overall, NAHREP said.

Estimated Hispanic purchasing power stands at $1.2 trillion and is expected to grow to $1.5 trillion by 2015, the trade group said.

"Hispanic homebuyers are poised to drive homebuyer activity in America for the next generation and beyond. The fulfillment of this scenario will largely depend on government policies that support first-time homebuyers, continued access to low down payment mortgages and the adaptability of the housing industry to provide products and services that are relevant to the cultural nuances and economic needs of the Hispanic consumer segment," the report said.

Half of all Hispanic homebuyers are first-timers and four out of every five purchase loans made to Hispanics are backed by the Federal Housing Administration (FHA), U.S. Department of Agriculture (USDA), or the Department of Veterans Affairs (VA), according to the report.

Immigration reform could add millions of prospective homebuyers to the market over the next several years given that naturalized Hispanics tend to become homeowners at a higher rate than U.S.-born Hispanics, the report said.

Regardless of whether immigration levels rise, four out of 10 new households formed between 2010 and 2020 are expected to be Hispanic and Hispanics are projected to account for half of all new homebuyers by 2020, the report said.