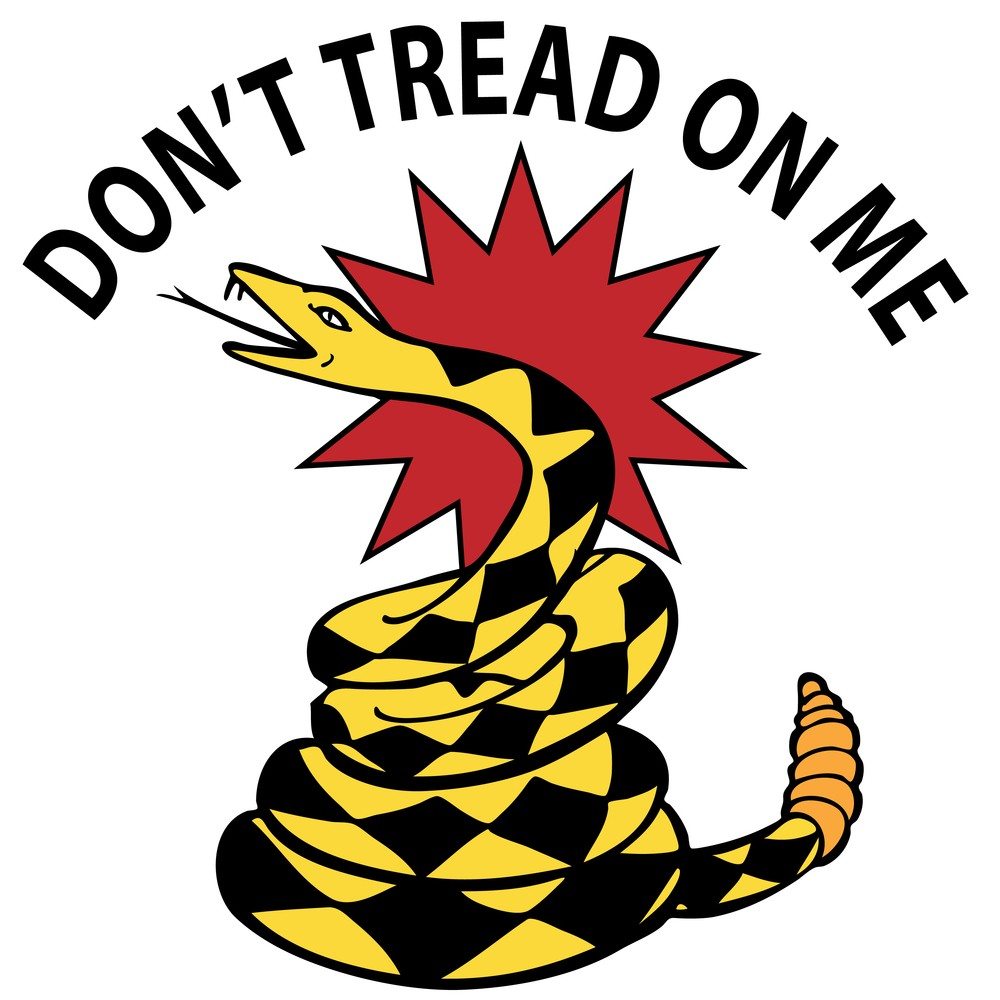 Some real estate brokers, agents and appraisers who belong to a multiple listing service in the Wichita, Kan., metro area are unhappy about a dues increase that the MLS put in place after choosing an exclusive showing appointment service provider for its 1,550 members.

CSS has six call centers that schedule more than fifteen million showings each year and services more than 130,000 Realtors in 70 markets across the nation, including 11 associations that have contracted with CSS to provide the service as a benefit to all of their members, the company said.

South Central Kansas MLS, operated by the Wichita Area Association of Realtors, selected CSS last month and tacked on an additional $47.70 to the MLS’s quarterly dues, bringing the total to $142.70, and prompting protests from some members, the Wichita Eagle reported. According to the newspaper, about 16 real estate agents, brokers, and appraisers gathered together at a meeting Friday to protest the higher fees, including some who said they objected to not getting to vote on the dues increase.

J.R. Boria, general manager at Great Midwest Realty, organized the meeting, which about 25 agents and appraisers attended, he told Inman News. He added that many more expressed interest in attending, but were unable to do so that day because they were attending continuing education courses. He is planning a follow-up meeting within the next two weeks.

“Today I am still getting phone calls and emails about the meeting and wondering when (and) where the next one will be. They are expressing gratitude that someone is willing to take a stand!” he said.

“We will be considering a petition, and a possibility of bringing a different MLS company for Wichita and the surrounding areas. What we really want is to be counted for and have a voice in our own business plan.” 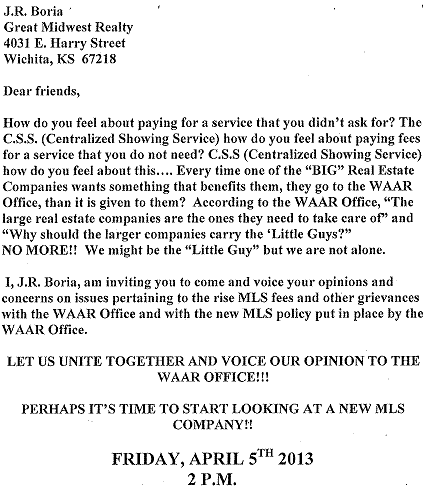 Boria framed the selection of CSS as a conflict between the wants and needs of big companies and small companies who are part of SCK MLS.

“The large companies want something and the WAAR office complies, and the little companies are forced to follow. We want a vote in these type of changes, especially monetary changes,” he said.

Tessa Hultz, WAAR’s CEO, said all 272 brokers and managing brokers belonging to the MLS were invited to a meeting on October 5, 2012 to see a CSS demo and discuss the pros and cons of adopting the service systemwide with the MLS board of directors. Hultz said the emailed invitation “left no question as to what was being discussed” and the invite noted that, “if adopted, the showing service would have an impact on MLS dues equivalent to the cost of the service per member.” About 55 brokers and managing brokers chose to attend, she said.

Hultz added that the decision to adopt CSS was made by two separate boards of directors — one for the MLS and the other for WAAR — and that both boards are made up of a mix of representatives from small, medium and large offices.

“The directors take their duties, obligations and roles very seriously and keep the best interests of the whole of membership at the forefront of every conversation and deliberation,” she said.

“The requests to consider a systemwide showing service came over a period of two years from different agents and brokers from varying office sizes,” she added.

Hultz said that, while she had discussed CSS with the couple, she did not do so in those “distasteful” terms.

“We did discuss the large company vs. small company perspective to which I responded, as I have on other occasions, that like standard forms provided by the association, no particular size company benefits over another in the use of standard forms, but all benefit by using a common instrument to conduct business in an industry where members must both compete and cooperate with each other,” she said.

Hultz said the dues increase was the first one the MLS had implemented since early 2009, despite having changed MLS vendors, MLS security software and the MLS executive officer during that time.

“The MLS dues were increased by the exact — to the penny — amount that CSS charges SCK MLS per member. There was no additional increase … beyond the fees CSS is charging us,” she said.

The showing service has been live for about a month. Hultz said the association had gotten mostly neutral or positive feedback on the service, as well as some negative comments.

“Different people adapt to and adopt new technology at different paces, so it is understandable that it will take some members time to adjust to the change, but we hope that all will eventually embrace the positives of the system beyond just the convenience of setting up showings online or with one phone call,” she said.

She noted the service also includes reports that show average showings in a neighborhood broken down by price range down to $10,000 increments. 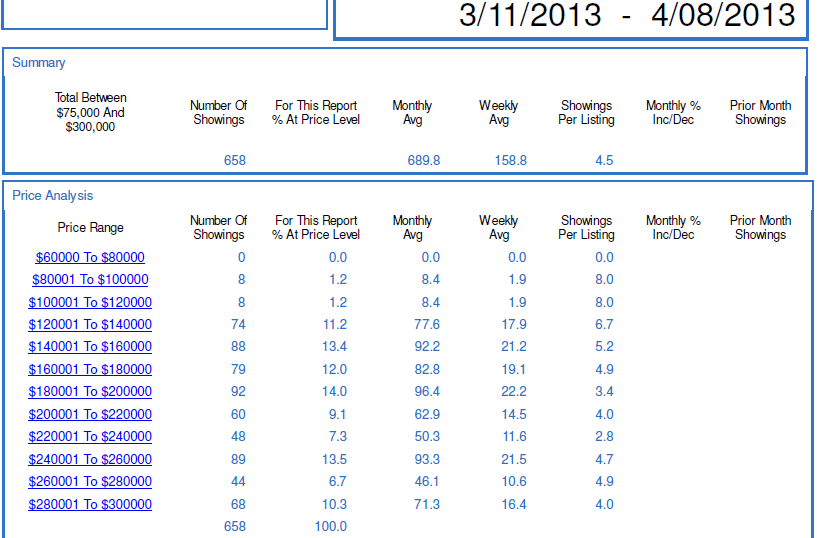 “You can see on the report where the showings are heavy and light,” Hultz said.

“So imagine you are an agent with a seller trying to determine listing price. The seller’s house is looking like it should be priced around $220,000. When you incorporate the showing data into the discussion you could show them that if they want to price at $221,000, listings in that range are getting an average of 2.8 showings per listing. But if they priced it at $219,990, they will be in the range that is netting four showings per listing. So it helps the seller make better decisions on how to price the property to get feet inside of it.”

Hultz said she had this advice for MLSs considering adding a new service that will result in a dues increase:

“Keep a bullet list of the pros and cons that were part of the discussion and led to the decision to adopt the service near the phone. The vast majority of calls will be members just wanting to know what pros and cons were considered and weighed in the decision making process to see that their interests were represented,” she said.

Zillow to get listings from Texas MLS
Back to top
Thousands of real estate pros joined us virtually yesterday for Connect Now and you can access the replays with a 2022 bundle.Access Now×
Agent Appreciation Sale: Inman Select for only $85.CLAIM OFFER×
Inmanpot
Log in
If you created your account with Google or Facebook
Don't have an account?
Create an Account
Forgot your password?
No Problem