Matt Cohen has this advice for companies that develop software platforms for multiple listing services: Don’t be a cat juggler.

More MLSs participated in the survey this year than ever before, Cohen said — 260 MLSs representing 825,684 subscribers completed the survey, fielded in January and February of this year.

For this survey, MLS executives report their subscribers’ overall satisfaction and MLS staff satisfaction separately. Clareity does not survey end users directly for these results due to confusion among end users about whether a particular issue stems from a vendor’s service or local MLS rules, Cohen said.

Both LPS platforms got the highest marks in overall end-user satisfaction among the 13 systems, with Paragon XL leading the pack and bumping last year’s top-rated system, FBS’ flexmls, to the No. 3 spot. Paragon XL has a total of 13,332 subscribers; Paragon 5 has 163,353 subscribers; and flexmls has 90,000 subscribers, Clareity said. 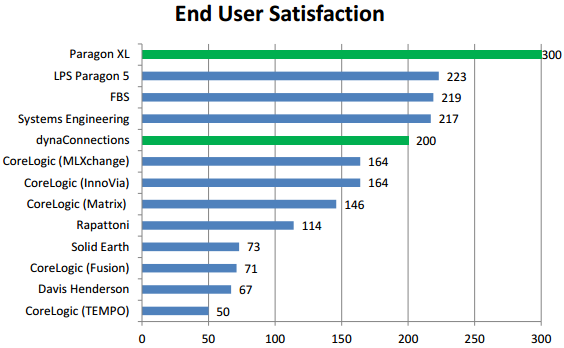 MLS vendors focused on launching or converting users to new systems rather than on the platforms customers are using generally suffered in the rankings, Cohen said. Solid Earth, for example, is about to launch a new MLS system, Spring, at the end of this month, he said, and LIST-IT’s rankings therefore slipped some while the company has been putting its attention on Spring.

"Companies that took their eye off of the products that they’re being contracted for are rated lower," Cohen said. CoreLogic, for instance, has a lot of platforms and is focused on moving subscribers from older platforms like Tempo to newer platforms like Fusion and Matrix, Clareity said.

"It’s hard for (CoreLogic) to juggle those cats. I think we’re going to see them bounce right back. Same with Solid Earth. They’re good vendors, but not in the right spot" at this point in time, Cohen said.

Nonetheless, vendors should keep in mind that customers may not be interested in migrating over to a replacement product, Cohen said. This may be especially true if the vendor has disappointed them with the service or system customers are currently paying for.

Between 9 and 14 percent of customer respondents for CoreLogic systems said they either likely or definitely would not choose CoreLogic again compared to 3 percent for LPS’ Paragon 5 and none for FBS’ flexmls.

In a blog post, Solid Earth President and CEO Matt Fowler said Solid Earth didn’t fare as well as the company had hoped. LIST-IT has 42,500 subscribers.

"I want to tell our customers that we’re aware of the situation, and that you are being forced to answer survey questions about a system that we’re in the process of retiring," he said.

Solid Earth’s technology infrastructure is undergoing a $2 million-plus overhaul to improve performance and reliability for LIST-IT and provide a firm foundation for Spring that has caused disruptions in some MLS operations, Fowler said.

"Stretching the real estate analogy, it’s hard for a listing to ‘show well’ when the renovation is still ongoing," he said.

Cohen gave kudos to LPS for assigning a team specifically for a new MLS, reInsight, the company launched in November.

"They did one thing right — they didn’t juggle cats. They left their Paragon team working on Paragon. Their XL guys are working on XL. They invested in the new platform; they didn’t make their customers invest," Cohen said.

Paragon and XL also topped the rankings for their mobile solutions, followed by CoreLogic’s InnoVia. 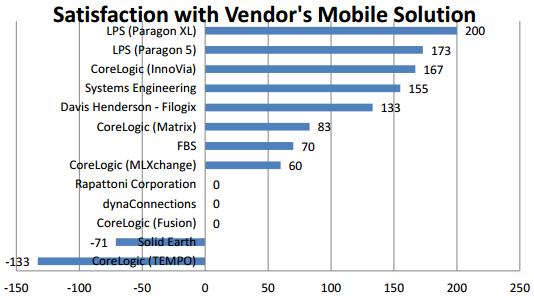