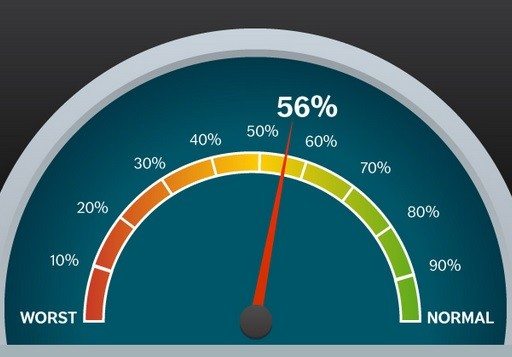 The housing market continued to trudge towards a recovery in March, with rising construction starts and falling foreclosure and delinquency rates bringing market conditions closer to those of a balanced one, according to Trulia’s Housing Barometer.

The barometer summarizes three key housing market indicators — construction starts, existing home sales, and the delinquency-plus-foreclosure rate — looking at how current conditions compare to those recorded at the depths of the housing crisis and those recorded before the housing bubble.

Trulia noted that while existing home sales dipped slightly from February to March, they were up 10 percent from a year ago. Residential construction posted a 47 percent annual gain in March, and the share of mortgages in delinquency or foreclosure fell to 9.96 percent, down a full percentage point from the same time last year.

As a result, Trulia’s Housing Barometer puts the housing market at 56 percent of the way back to normal in March, compared to 54 percent in February and 33 percent a year ago.

This month’s improvement is even better than it looks, said Trulia Chief Economist Jed Kolko, because of a shift of sales from distressed to conventional and early signs that the inventory crunch may be easing, which would bring some relief to would-be homebuyers.

Survey shows Realtors more upbeat in March
Back to top
Only 3 days left to register for Inman Connect Las Vegas before prices go up! Don't miss the premier event for real estate pros.Register Now ×
Limited Time Offer: Get 1 year of Inman Select for $199SUBSCRIBE×
Inmanpot
Log in
If you created your account with Google or Facebook
Don't have an account?
Create an Account
Forgot your password?
No Problem