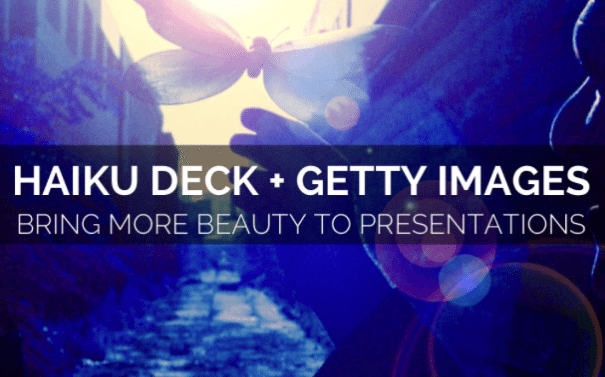 Users of Haiku Deck, the free iPad application from the Seattle-based firm of the same name, now have access to 1 million photos from Getty Images at their fingertips.

As part of the app’s update, announced today, users can purchase an image from Getty Images, a premier stock photo service, for $1.99 per photo, when they don’t find the perfect shot using the app’s integration with the free “Creative Commons” photo library from the photo-sharing community Flickr.

The new version of the iPad app, currently Haiku Deck’s only offering, also now allows users to highlight images for future use, track all the photos they’ve already used, and write private notes into their presentation that only they can see. Users can pull in their own images from a variety of locations including Dropbox, Instagram, Facebook and other platforms.

Haiku Deck, which has registered about 600,000 downloads since its launch in August 2012 and is used by some real estate agents to create listing presentations or marketing slideshows, has released three new design themes with the update, said Haiku Deck CEO Adam Tratt.

Haiku Deck makes money by charging users $1.99 for access to some of its design themes, which feature different fonts, color schemes and image filters, Tratt said. Haiku Deck now has 13 designs it charges for and six for free, he said.

In the next month or two, Haiku Deck is planning to release desktop and other versions of its presentation software, Tratt said.

Haiku Deck iPad app helps Realtor win $1.4M listing
Back to top
Only 3 days left to register for Inman Connect Las Vegas before prices go up! Don't miss the premier event for real estate pros.Register Now ×
Limited Time Offer: Get 1 year of Inman Select for $199SUBSCRIBE×
Inmanpot
Log in
If you created your account with Google or Facebook
Don't have an account?
Create an Account
Forgot your password?
No Problem