ATLANTA — U.S. Sen. Johnny Isakson, a longtime ally of the real estate industry, confirms that the mortgage interest deduction is “on the table” in tax reform discussions.

“It’s got to be on the table like everything else,” Isakson told a group of real estate journalists Friday. “It has to be evaluated on a cost-benefit analysis.”

Isakson told attendees of the National Association of Real Estate Editors (NAREE) annual conference that if a tax deduction “costs the government more money than it benefits the government, it’s got to go away.”

The Georgia Republican is one of a number of incumbents who have received strong backing from the National Association of Realtors’ political action committee, RPAC.

RPAC made $377,353 in independent expenditures on Isakson’s behalf during his successful 2010 re-election bid. He is a former real estate broker and serves on four Senate committees with jurisdiction over education, federal spending, health care, taxes and veterans’ affairs.

NAR strongly opposes any changes to the mortgage interest deduction, claiming such changes could depreciate home prices by up to 15 percent.

“However, it has always been NAR’s position that the MID is vital to the stability of the American housing market and economy, and we will remain vigilant in opposing any future plan that modifies or excludes the deductibility of mortgage interest,” she said.

Isakson said he has yet to sponsor or sign any legislation in regards to the tax code, but that he favors a flatter, simpler, more competitive system with fewer deductions.

“We need some predictability and certainty to the corporate tax code,” he said.

In his opinion, he said, the most politically viable solution could be to cap itemized deductions for mortgage interest, charitable contributions, and other deductions at a certain dollar amount or percentage.

Tax reform is currently taking a backseat to immigration reform on Capitol Hill, but there’s a “reasonably good chance” the tax reform debate will heat up again over the next three or four weeks, Isakson said.

Isakson further noted that he had recently introduced two housing-related bills. The first, the Mortgage Finance Act of 2013, would create a new agency to replace Fannie Mae and Freddie Mac. The second, the SAVE Act, would factor in energy costs into mortgage underwriting by federal agencies.

He said the housing market is recovering, “but it’s got a ways to go.” One of the issues holding the recovery back is an uncertain regulatory environment, he said, referring specifically to the yet-to-be released qualified residential mortgage (QRM) rule that would require lenders to retain 5 percent of the risk on all but the safest loans.

In the rule’s original iteration, for a loan to qualify for an exemption, borrowers would have to make down payments of at least 20 percent — a requirement that prompted strong objections from the real estate industry.

Isakson said he favors making the QRM rule the same as the qualified mortgage rule, released by the Consumer Financial Protection Bureau in January. The rule requires lenders to ensure borrowers have the ability to repay their loans using eight underwriting criteria. Isakson said he commended the bureau’s head, Richard Cordray, for coming out with a “reasonable” QM rule.

“We can’t return our economy to where we’d like it to be” without more mortgage financing and a return of the construction industry, Isakson said. 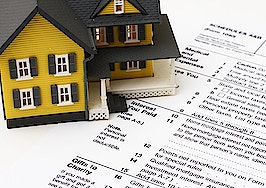 Will improving economy protect mortgage interest deduction?
Back to top
Only 3 days left to register for Inman Connect Las Vegas before prices go up! Don't miss the premier event for real estate pros.Register Now ×
Limited Time Offer: Get 1 year of Inman Select for $199SUBSCRIBE×
Inmanpot
Log in
If you created your account with Google or Facebook
Don't have an account?
Create an Account
Forgot your password?
No Problem