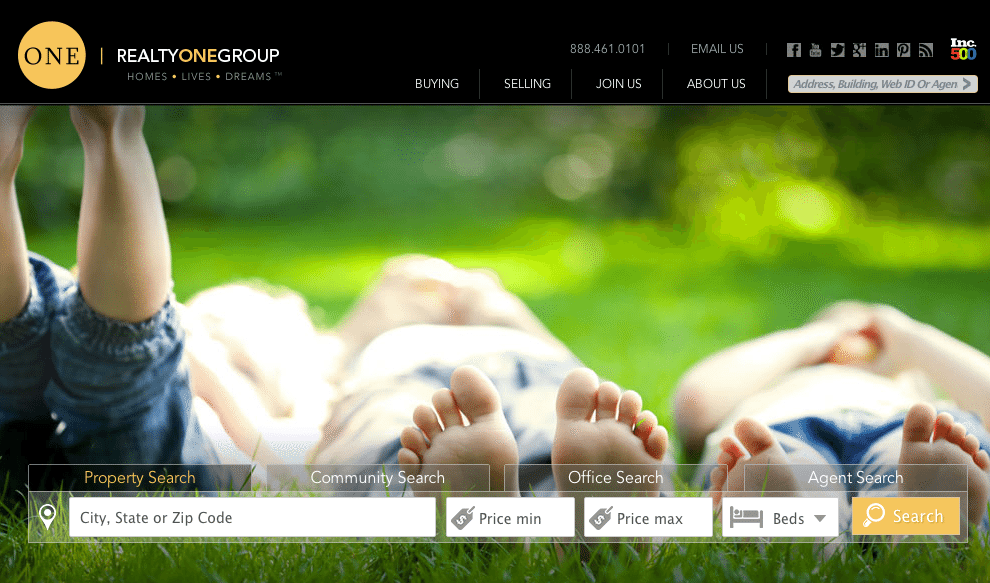 Realty One Group has revamped its website and branding and launched new consumer mobile apps as it prepares for a nationwide expansion.

The Henderson, Nev.-based firm’s refresh includes a new tagline — “Homes, Lives, Dreams” — and a simplified logo that brings its iconic circle “one” to the forefront.

The fast-growing brokerage — founded in 2005 and now ranked by Real Trends as the nation’s seventh-largest — announced last year that it would expand into franchising.

The revamped website and branding are part of the company’s desire to go head-to-head with some of big franchise brands like Prudential Real Estate and Coldwell Banker Real Estate, said Realty One Group CEO Kuba Jewgieniew.

The website includes a panoramic background image, streamlined search bar and a “community search” feature, powered by data firm OnBoard Informatics, which helps users find areas they might like to live based on a set of 10 features they rate as important to them in a new neighborhood. The tool can surface whether an area is close to a golf course, is pet-friendly, or has great schools, for example.

Jewgieniew said the new capabilities help Realty One Group serve its agents by highlighting the firm’s focus on local knowledge. He said the firm tracks consumers’ habits on the site and feeds them into an algorithm that helps the firm match up the best agent for the particular consumer.

Realty One Group operates its 17 brokerage offices and 14 new franchises primarily in Arizona, Nevada and California at the moment, and has been on a growth tear.

In April, Realty One Group began advertising its listings on Trulia, and in March began paying to enhance them on Homes.com.

The firm recently added an Idaho broker as its first franchisor outside of Realty One Group’s three-state core area, and will announce more growth in the coming months, a Realty One Group spokesperson said.

Realty One Group expanding into San Diego
Back to top
Only 3 days left to register for Inman Connect Las Vegas before prices go up! Don't miss the premier event for real estate pros.Register Now ×
Limited Time Offer: Get 1 year of Inman Select for $199SUBSCRIBE×
Inmanpot
Log in
If you created your account with Google or Facebook
Don't have an account?
Create an Account
Forgot your password?
No Problem