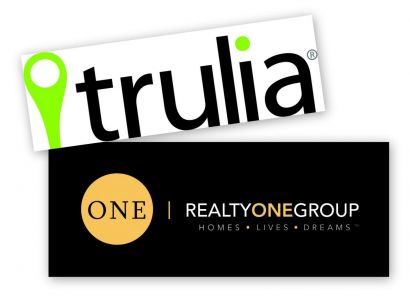 Realty ONE Group, the fast-growing brokerage and franchisor based near Las Vegas, is the latest real estate firm to pay to raise its visibility on Trulia with branded listing pages and agent profiles.

The 8-year-old firm — ranked by Real Trends as the 11th-largest brokerage by closed transaction sides in 2011, joins hundreds of other firms, including Alain Pinel Realtors, Better Homes and Gardens Real Estate Mason McDuffie and Re/Max Results, who pay to enhance their branding on the second-most visited real estate website in the U.S.

Realty ONE Group has 15 brokerage offices with more than 4,000 agents in Arizona, Nevada and Southern California and opened its first franchise office in Temecula, Calif. in October.

The firm also began enhancing its listings on Homes.com in March and was one of the first brokerages to join the Zillow Pro for Brokers Program, a free program that gives a broker’s listings more visibility on the portal in exchange for a direct data feed, when it launched last July.

Other real estate companies have paid to advertise their listings on the large portals. Pittsburgh-based Howard Hanna Real Estate — ranked by Real Trends as the fourth-largest brokerage by transaction sides in 2011 — said in February it would pay a seven-figure sum (between $1 million and $10 million) for special treatment of its listings on Trulia and Zillow.

Some brokers and agents have complained about advertisements and the accuracy of listings on third-party search portals that aren’t operated by brokerages or multiple listing services. But some of the biggest names in the business continue to enter into agreements that boost their visibility on third-party sites, which tend to attract more traffic than MLS- and broker-operated websites.

In November 2011, Edina Realty, citing a desire to direct more traffic to its own website and an aversion to ads next to its listings on Trulia, announced that it would stop syndicating its listings to the portal. In May, the brokerage pulled its listings from Realtor.com, citing the same reasons.

Fannie Mae: Housing recovery could be 'more robust' than anticipated

My face is not my brand
Back to top
We're giving away 3 free ICLV tickets at Connect Now next week. Register and attend live for your chance to win!REGISTER×
Inmanpot
Log in
If you created your account with Google or Facebook
Don't have an account?
Create an Account
Forgot your password?
No Problem