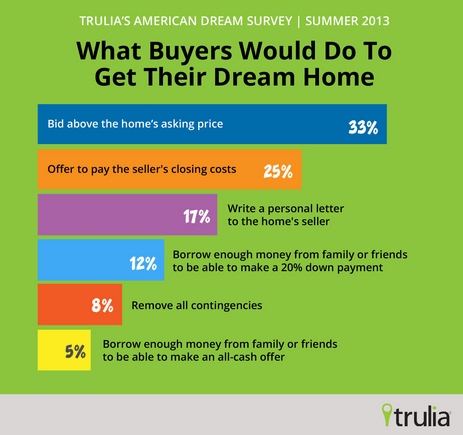 One in 3 buyers are willing to bid higher than a home’s asking price, according to a survey conducted by Trulia in partnership with Harris Interactive.

That was just one of several other findings of the survey that appear to show that homebuyers are feeling the squeeze of market conditions that are significantly altered from those of a year ago. At the same time, they capture improved sentiment towards the housing market.

Today’s tight home inventory appears to be pushing some buyers to use aggressive tactics to beat out competing buyers, the survey found. In addition to a third of buyers being willing to make above-market offers, 1 in 4 said that they would offer to pay a seller’s closing costs.

“Tight inventory means slim pickings for buyers. Even though inventory is starting to expand, and rising home prices should bring more for-sale homes onto the market, people who actually want to buy within the next year are feeling the pressure of competing buyers and limited inventory,” wrote Trulia Chief Economist Jed Kolko in blog post about the survey.

Also seemingly a symptom of today’s limited housing stock, homebuyers who plan to buy within the next year said that finding a home that they like is their biggest worry.

And highlighting two other defining characteristics of today’s market, consumers who said they might buy someday indicated that their two greatest fears were that mortgage rates and home prices would rise further.

But in a sign that people’s attitudes towards homeownership have recovered significantly since the downturn, 60 percent of respondents said that they thought homeownership is one of the best long-term investments they could make, up from 47 percent two years ago.