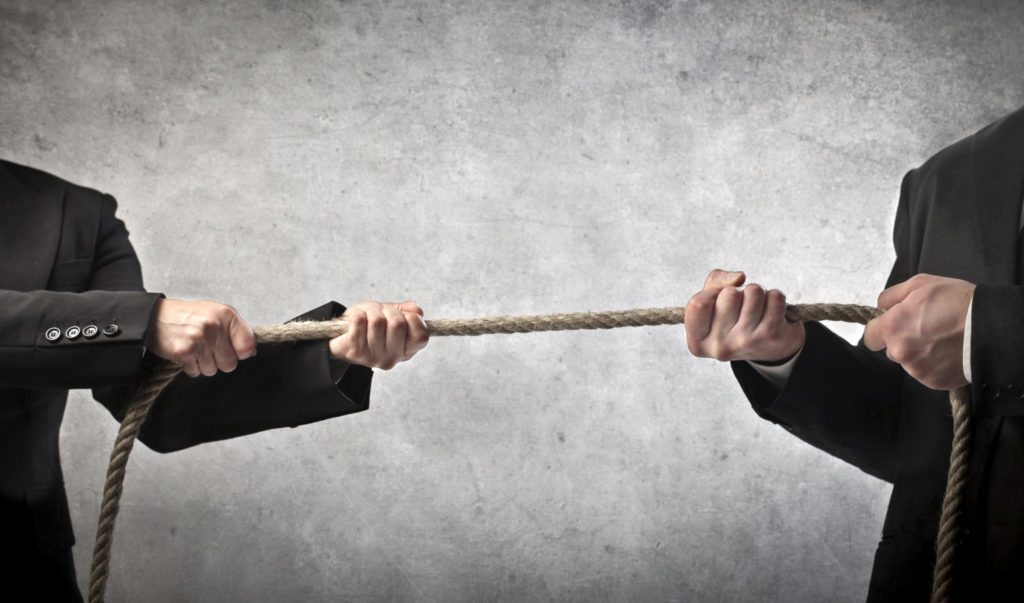 In short order, Des Moines-based Iowa Realty — a subsidiary of Berkshire Hathaway affiliate HomeServices of America Inc., and the largest brokerage in the state — informed the newly converted franchise that it would not share commissions with Keller Williams agents on its resale properties posted in the local multiple listing service. The policy, which is still in force, does not apply to new homes or foreclosed properties.

In a statement, Iowa Realty said that, “During the course of the lawsuit, it was shown that Iowa Realty’s policies were legal, compliant with the rules and ethical standards of the Des Moines Area Association of Realtors, and well within Iowa Realty’s business discretion. Iowa Realty believes now, as it has since 2006, that its policies toward Keller Williams serve the best interests of its customers and the real estate market generally.”

Brian Wentz, team leader and CEO of Keller Williams Greater Des Moines, said the brokerage decided to dismiss the suit in ofrder to focus on its agents, its consumers and growing its market share.

“Really what it boils down to is we’re choosing to go win in the marketplace instead of the courtroom,” he said.

Wentz said Iowa Realty had sought to obtain the names of agents, inside and outside of Iowa Realty, with whom Keller Williams had had confidential conversations regarding transferring to the new brokerage.

In the suit, Keller Williams had claimed losses incurred when agents who had committed to joining the company chose not to after Iowa Realty implemented its commission policy. Attorneys for Iowa Realty requested the names of those agents in order to answer Keller Williams’ interference claims, according to a court filing.

“As an organization we chose to honor our commitment to confidentiality … because we felt it wouldn’t be appropriate to put those agents and their families under the microscope that (releasing their names) would have created,” Wentz said. “Not providing the names was the right thing to do.”

After launching with 28 agents, Keller Williams Greater Des Moines recently signed its 100th agent, Wentz said. He said 15 of those agents were recruited from Iowa Realty.

“We believe in being great competitors in the marketplace and a part of that is offering a great environment for the agents to grow and run their business, and agents have seen that opportunity and been attracted by what that offers,” Wentz said.

He said his brokerage has achieved just under 5 percent market share in the Des Moines market, and estimated Iowa Realty’s market share stood somewhere in the 40 percent range.

Iowa Realty declined to comment on the size of its market share. According to data collected by Real Trends, the brokerage was the largest in the Des Moines market by both transaction sides and dollar sales volume in 2012, completing 8,587 sides worth $1.6 billion — about three times the business of its next largest competitor.

While Iowa Realty’s decision not to split commissions with Keller Williams agents may be legal, “just because it’s legal doesn’t mean it’s the right thing to do for their consumers and for the sellers of Iowa,” Wentz said.

“They are collecting commissions from their consumers indicating that they are cooperating with other brokers and instead sending $1 … without disclosing that this is occurring,” he added.

“I can’t help but wonder what the consumer would think of their hard-earned equity not going where they believe it was going.”

“It’s bad for the consumer and yet that’s certainly their choice,” he said.

“It’s bad business for them because consumers are figuring out they don’t have all the listings, Wentz said. “At least three in the last month” have called to say they wanted to buy a house that had just sold but hadn’t appeared on Iowa Realty’s website.

“It’s a great example where their choice in business practices is actually hurting their own consumers,” he added.

The real estate industry is rooted in the concept of cooperation, Wentz noted. “It benefits the consumers when all of the companies work together to accomplish the buyers’ and the sellers’ goals.”

Iowa Realty also declined to comment on whether the policy is in the best interests of consumers. But a spokeswoman for the company expressed concerns regarding the ethics and professionalism of Keller Williams’ recruiting practices.

Joan Johnson, senior vice president and general counsel for Iowa Realty, said Keller Williams Realty’s “core focus” on recruiting agents from other brokerages is “extremely disruptive to the other brokerages in the market and diminishes the professionalism of the industry.”

Most importantly, Iowa Realty believes Keller Williams’ practice of providing financial incentives to its agents to recruit other agents into their “downline” or profit-sharing tree negatively affects the recruiting agents’ ability to represent the best interests of their buyer and seller clients, Johnson said.

In Keller Williams’ profit and growth sharing programs, each sales associate names a “sponsor” within the company when joining Keller Williams, and a share of profits from each office is shared with sales associates, who in turn share a percentage with their sponsors, according to a 2012 white paper from the franchisor.

“In contrast, Iowa Realty agents are compensated only for serving their (own) buyer and seller clients. They put 100 percent of their focus on representing buyers and sellers of real estate,” Johnson said.

“Iowa Realty agents do not go into a transaction with two possibly conflicting motives — getting the best deal for their clients and recruiting the agent representing the other side of the transaction.”

In response, Wentz said Keller Williams was not ashamed that it spends time getting to know agents, understanding their goals and “identifying opportunities in their business that allow the agent to grow and serve their customers at the highest level.”

He noted that a company the size of Iowa Realty “did not get where they are without talking to agents in the marketplace. In fact, I have personally received their recruiting emails for many years.”

Wentz said Keller Williams’ model treats associates as stakeholders in the company and gives them the chance to take part in decision-making and also profits, through its profit-share plan.

“In traditional brokerage, the management and the owners profit from growth,” he said. “At Keller Williams our associates have an opportunity to take part in the profits and create passive income, as if they were an owner — with the risks of ownership. That interdependency fosters a culture of ‘we all succeed together.’ ”

Wentz said the ethical question was whether it is right to try to protect a company’s market share at the expense of the consumer’s interests.

“If we have a buyer, how does it serve their customer’s best interests to not share commissions and then keep the full commission for themselves?” he said.

“We don’t believe it’s in a home seller’s best interest that their broker chooses to use the seller’s equity as a pawn,” he added.

Iowa Realty has a history of withholding commissions from some competitors. In January 2001, an antitrust appeal to the Iowa Supreme Court noted that Iowa Realty had stopped sharing commissions with three companies: Re/Max franchise Max 100, Next Generation Realty Inc., and Homebuyer’s Consultants. The court ultimately threw out the antitrust claims against Iowa Realty.

In December 2011, Iowa Realty informed Jon Niemeyer, broker owner of Norwalk-based Exit Realty North Star, which had recently affiliated with Ontario, Canada-based franchisor Exit Realty, that it would pay the brokerage’s buyer’s agents only 80 percent of the commission split paid to those with other firms.

Niemeyer declined to comment for this story. Iowa Realty confirmed that its commission policy regarding Exit Realty North Star had not changed because Exit Realty also provides financial incentives for its agents to recruit.

Johnson declined to say whether Iowa Realty was currently withholding commissions from any other company but noted that Iowa Realty’s commission policy was not unique to Iowa Realty and Keller Williams Greater Des Moines.

“Brokers throughout the industry exercise their right to vary the commissions shared with other brokers every day,” she said.

The fund has allowed Keller Williams Greater Des Moines agents to show their buyers “all properties that meet their needs and be compensated for their work,” Wentz said.

“Those complaints could not be reviewed while there was pending litigation so those claims will now be able to be reviewed by those entities,” he said.

But Johnson said the complaints filed with the Des Moines Area Association of Realtors and the Iowa Attorney General had been resolved in Iowa Realty’s favor, and that the Iowa Real Estate Commission staff had informed Iowa Realty that its file would be closed now that the legal claims had been dismissed. She said she had not been notified that any of the entities mentioned by Wentz had consented to consider the complaints now that the suit has been dropped or that they have even been asked to consider them.

Moreover, Johnson said, Keller Williams Greater Des Moines “has told the media that they are focusing on their agents now rather than pursuing these claims. I find their previous statements disingenuous if they are going to continue to pursue their claims, and just changing the forums.”

According to Wentz, part of the reasoning behind dropping the lawsuit is that Iowa Realty had indicated in the case’s discovery process that abandoning the suit would open the door for discussion between the two rivals. He said Keller Williams reached out to Iowa Realty last week after dropping the suit and received no response.

Keller Williams, Johnson said, “did not reach out to Iowa Realty until after it forced Iowa Realty to (1) hire legal counsel in Iowa and Texas; (2) retain experts to support its opinion that aspects of Keller Williams’ business model are harmful to consumers, agents and the industry; (3) produce thousands of pages of documents; and (4) spend hundreds of hours responding to a lawsuit that had no factual or legal basis.”

Furthermore, “as a result of the many distractions to its business, countless baseless accusations and negative comments in the press and social media, and the considerable cost incurred by Iowa Realty as a result of this lawsuit, Iowa Realty is evaluating its legal and business options,” she added.

The hostility between the companies was even remarked upon by Judge Hutchison, who said he had “little patience for the petty bickering which has marred much of the discovery process in this case.”

Survey: Recruiting biggest challenge to growing profits
Back to top
Only 3 days left to register for Inman Connect Las Vegas before prices go up! Don't miss the premier event for real estate pros.Register Now ×
Limited Time Offer: Get 1 year of Inman Select for $199SUBSCRIBE×
Inmanpot
Log in
If you created your account with Google or Facebook
Don't have an account?
Create an Account
Forgot your password?
No Problem